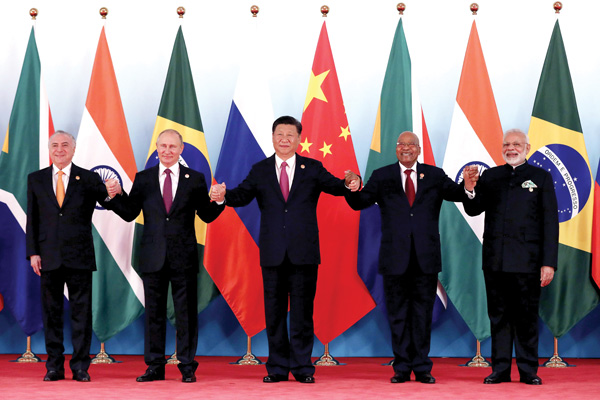 “We…express concern on the security situation in the region and violence caused by the Taliban, ISIL/DAISH, Al-Qaida and its affiliates including Eastern Turkistan Islamic Movement, Islamic Movement of Uzbekistan, the Haqqani Network, Laskar-e-Taiba, Jaish-e-Mohammad, TTP and Hizb-ut-Tahrir.”

The recently held BRICS (Brazil-Russia-India-China-South Africa) summit in China was seen as diplomatic victory for India on the issue of cross boarder terrorism. The BRICS in its joint statement first time named Pakistan based groups like Lashkar-e-Taiba(LeT) & Jaish-e-Mohammed(JeM) as terrorist groups. Earlier China, a member of UNSC, scuttled the India’s move to get JeM’s chief Maulana Masood Azhar named a terrorist by the United Nations. Political pundit appreciated Prime Minister Shri Narendra Modi’s diplomatic acumen to get banned the Pakistan sponsored terrorist outfits among BRICS nations in Xiamen.

Prime Minister Shri Narendra Modi attended BRICS summit on September 4,2017. In the 43-page Xiamen declaration, with 17 references to terrorism, made it clear that India has been able to convince others in the grouping about the threat posed by Pakistan-based organisations as the document also contained references to groups such as the Haqqani Network, Eastern Turkistan Islamic Movement and Pakistani Taliban that have targeted Afghanistan and China.

“We deplore all terrorist attacks worldwide, including attacks in BRICS countries, and condemn terrorism in all its forms…,” said the declaration released after the plenary session of the 9th Brics summit.

“We…express concern on the security situation in the region and violence caused by the Taliban, ISIL/DAISH, Al-Qaida and its affiliates including Eastern Turkistan Islamic Movement, Islamic Movement of Uzbekistan, the Haqqani Network, Laskar-e-Taiba, Jaish-e-Mohammad, TTP and Hizb-ut-Tahrir,” the group said.

On the sidelines of the 9th BRICS summit Prime Minister Narendra Modi and Chinese President Shri Xi Jinping held forward looking discussions and called for peace in the border area. It was first substantive bilateral meeting after the Dokalam standoff between the two countries.

In a Press conference foreign Secretary Subrahmanyam Jaishankar “Shri Modi and the Chinese President felt that there should be closer communication between the defence and security personnel of India and China. The two leaders reaffirmed that it is in the interest of both India and China to have good relations, he added. During the meeting, both Shri Narendra Modi and Shri Jinping reaffirmed the understanding reached earlier this year at Astana between them to not allow differences to become disputes. They felt that peace and tranquillity in the border areas is a pre-requisite for ties to move forward, Jaishankar said.

Asked if the Dokalam standoff had been left behind by the two sides, he said, “It was a forward-looking conversation and not a backward-looking one.”

In his initial remarks during the meeting, Shri Modi congratulated the Chinese President on a “very successful” BRICS Summit, saying the conference had been a success in making the grouping more relevant in a fast-changing world.

Shri Jinping told Mr. Modi that the two countries should pursue “healthy, stable bilateral ties”, China’s state-run Xinhua news agency reported.
China is willing to work with India on the basis of the Five Principles of Peaceful Coexistence (Panchsheel), which were put forward by both the countries, to improve political mutual trust, promote mutually beneficial cooperation, and push Sino-India ties along the right track, Jinping was quoted as saying.

The meeting came amid diplomatic efforts by the two sides to overcome the bitterness caused by the 73-day face-off between their troops in the Dokalam area of the Sikkim sector.

The Chinese and the Indian troops were engaged in a standoff since June 16 after the Indian side stopped the construction of a road by the Chinese Army.

Before Prime Minister Shri narendra Modi’s visit to China for attending BRICS summit, on August 28 the two countries announced that New Delhi and Beijing have decided on expeditious disengagement of their border troops in the disputed Dokalam area. 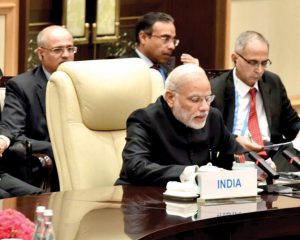 “We should impose restrictions on activities of elements like LeT and JeM so that we can show the global community that we’ve put our house in order,” Asif said while responding to a BRICS declaration that named several terrorist groups, including the two, as threats to regional security. Asif said Pakistan could no longer afford to “test” its friends on the issue of terrorism. “Friends like China should not be tested every time, particularly in the changed (global) scenario,” the minister added.