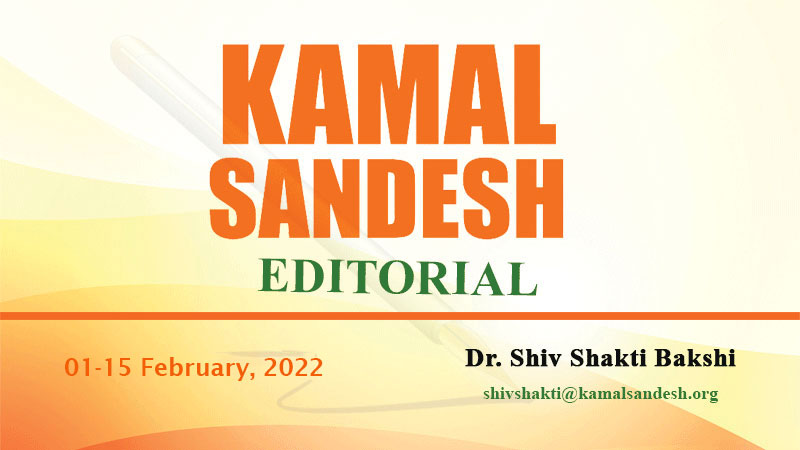 As India celebrated ‘Parakram Divas’ on January 23, 2022, the 125th birth anniversary of Netaji Subhash Chandra Bose, the unveiling of his hologram statue at India Gate by Prime Minister Shri Narendra Modi expressed the feelings of the indebted nation towards one of the most beloved sons of Maa Bharati. The Prime Minister has also announced that very soon the hologram statue of Netaji will be replaced by a huge grand granite statue, which will also be an honour to the heroes of INA. While the nation will be celebrating Netaji’s birth anniversary every year as “Prakaram Diwas”, the Republic Day celebrations too will start a day early on his birthday – the 23rd of January every year. The selfless devotion to the nation’s independence, uncompromising vision, sacrifice and struggle, indomitable courage, and indefatigable spirit of Netaji continue to inspire and guide every Indian.

It’s to be noted that soon after independence, the legacy of India’s freedom struggle was sought to be appropriated by some vested interests who tried to undermine the contributions of the great heroes at the altar of dynastic politics. It was highly unfortunate that while the members of a particular family were highlighted, the memories of many great heroes were sought to be erased from people’s minds. Prime Minister Shri Narendra Modi is making extra efforts to undo the wrongs done to the national heroes by expressing the nation’s indebtedness to their contributions in an appropriate manner. The Statue of Unity commemorating Sardar Patel, the development of Panchtirth in memory of Babasaheb Bhimrao Ambedkar, the naming of the island of Andaman after Netaji, and many more such efforts are now inspiring the nation and celebrating the contributions of these great sons of India.

While attempts are being made to honour the memory of great heroes of India, a group of people who have developed their vested interests in dynastic politics seek to create unnecessary controversies around these steps. The discussion over the merger of the Amar Jawan Jyoti flames at the National War Memorial is such a needless controversy, which was stoked by the same group who refuse to accept that a self confident India is charting a new course with a grand vision. It is the same group that stirs up opposition to Central Vista projects and any new initiative that seeks to build a New India that exudes grandeur and glory.It is the mindset that is opposed to the construction of Somnath Temple in Gujarat, Prabhu Shri Ram Temple in Ayodhya, and remains uncomfortable with the Kashi Corridor, Char Dham Corridor, and the restoration of Kedarnath Dham.

India has completed one year of its vaccination programme under the charismatic and dynamic leadership of Prime Minister Shri Narendra Modi on January 16, 2022. The journey that started one year ago has created many milestones as the world has witnessed this journey’s progress with awe and amazement. Today, while more than 92% of the eligible population has received at least one dose, over 157 crore people are vaccinated. On this journey, many times more than one crore jabs were given in a single day and even crossed more than 2.5 crore on the birthday of Prime Minister Shri Narendra Modi on September 17, 2021. The nation felt proud of its scientists, doctors, nurses, medical staff, frontline health workers, Corona Warriors, and administrative staff who worked tirelessly to make this possible, which appeared impossible when the journey started. What is more remarkable is that this achievement has been made on the basis of ‘Made in India’ vaccines, which have become a gift of India to other countries as well. As the one-year vaccination journey comes to an end, people’s faith in India’s future has grown exponentially across the country.The world is witnessing today the emergence of a new India, which is proud of its cultural heritage, civilizational legacy and confidently moving towards building an ‘Aatmnirbhar Bharat’.