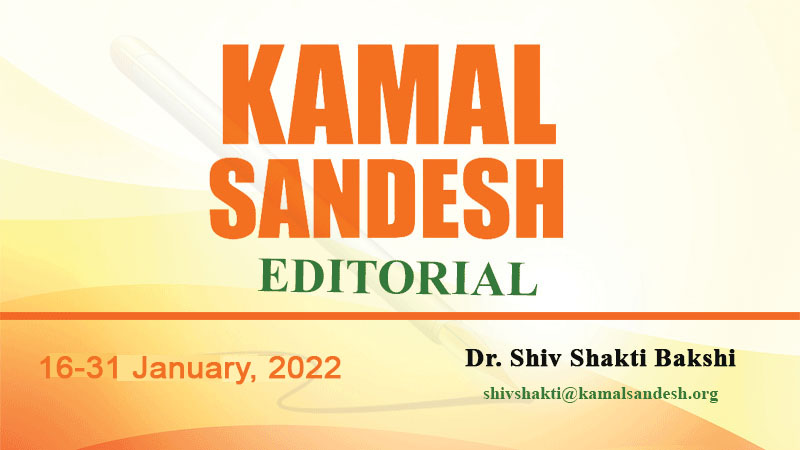 In a highly unfortunate incident, the Congress government in Punjab allowed a security breach to take place when Prime Minister Shri Narendra Modi was on his way to pay respects at the National Martyr’s Memorial in Hussainiwala in the state. As the PM’s convoy, which got stuck on a flyover on its way for around 20 minutes, returned in view of the impending security threats, the incident has raised many serious questions about the declining level of politics in the country. It’s also about the sanctity of institutional arrangements wherein even the security of the Prime Minister can be at risk as a result of vendetta politics. In such circumstances, the questions related to the functioning of the federal polity, observance of political ethics, and norms in multi-party democracy become even more glaring for any political observer. It’s not only about politics but about the future of the democratic polity. And if it’s a political game, then it’s a dangerous game.

While the Congress government in Punjab failed in its constitutional duty to secure safe passage for the PM’s convoy, the explanation extended by the Punjab chief minister is extremely dubious and exceedingly shocking. It is a well-known fact that, as an SPG protectee, the Prime Minister’s movements are always planned well in advance and alternative routes are secured to facilitate the movement of his convoy. His claim that the route was changed at the last minute has been proven as a shameful lie, denigrating the office he holds in the state. His further claim that there was no threat to the Prime Minister shows his shameless attempt to defend an indefensible act in which he, along with his office, had connived. Everyone knows that the Prime Minister has the highest threat perception in the country due to his relentless fight against terrorism, both within and outside India, and Punjab, being a state bordering Pakistan, has been witnessing attempts by terror groups to disturb peace in the state. But unfortunately, the Punjab chief minister sees no threat to PM in the state. It clearly shows how unfit he is for the post that he currently holds.

The gravity of the situation may be gauged from the fact that not only was the PM’s convoy stuck on the flyover for 20 minutes, but it was well within the artillery range of Pakistan. It cannot be said to be a “security lapse” but a well-planned conspiracy to undermine the PM’s security. It is to be noted that PM’s movements are secured by the state police, who coordinate with SPG and give clearance on the route to be followed by the convoy. In addition to this, the route of the PM’s convoy, along with the alternative routes, is kept highly confidential and a proper drill is conducted much in advance to secure these routes completely. In view of such watertight arrangements, there is not even a remote possibility of protestors getting knowledge of the PM’s movement, that too when he is travelling on an alternative route, without any complicity at the highest level. There cannot be an iota of doubt that the route was blocked at the behest of the highest level of the state law and order machinery and the Punjab police allowed it to happen deliberately and even actively supported it. It was politics at its nadir, an extremely dangerous act.

The Punjab chief minister, Charanjit Singh Channi, cannot absolve himself of his complicity in this criminal act. Moreover, he is guilty of not responding to the calls, not coming out to welcome the PM of the nation, not allowing his senior officials to accompany the PM’s convoy, and misleading the nation with his false claims. It is to be noted that the PM was in Punjab to pay respects to the National Martyr’s Memorial, inaugurate various developmental projects and address a BJP rally in Ferozepur. The actions of the Punjab chief minister are not only an assault on the federal polity but also disrespect to the martyrs while acting against the interests of the people of Punjab, for whom the PM was supposed to inaugurate many developmental projects. He has not only debased his office but has made a mockery of the entire institutional arrangements, constitutional propriety, and political ethics of the country. As the entire nation is concerned about the security of the PM and condemning this kind of vendetta politics, the incident should be investigated thoroughly and the culprits should be given exemplary punishment at the earliest. The nation will definitely teach a lesson to Congress for its political misadventure in the days to come.