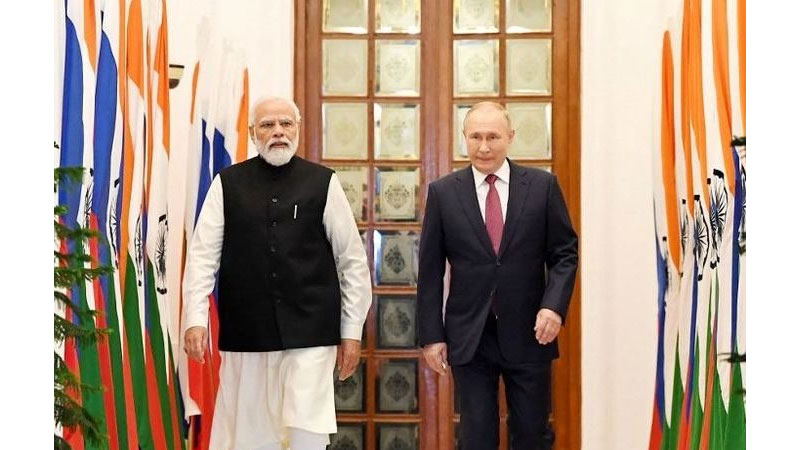 President Putin was accompanied by a high level delegation. Bilateral talks between Prime Minister Modi and President Putin were held in a warm and friendly atmosphere. The two leaders expressed satisfaction at the sustained progress in the ‘Special and Privileged Strategic Partnership’ between both countries despite the challenges posed by the Covid pandemic. They welcomed the holding of the first meeting of the 2+2 Dialogue of Foreign and Defence Ministers and the meeting of the Inter-Governmental Commission on Military & Military-Technical Cooperation in New Delhi on 6 December 2021.

The leaders underscored the need for greater economic cooperation and in this context, emphasized on new drivers of growth for long term predictable and sustained economic cooperation. They appreciated the success story of mutual investments and looked forward to greater investments in each others’ countries. The role of connectivity through the International North-South Transport Corridor (INSTC) and the proposed Chennai – Vladivostok Eastern Maritime Corridor figured in the discussions. The two leaders looked forward to greater inter-regional cooperation between various regions of Russia, in particular with the Russian Far-East, with the States of India. They appreciated the ongoing bilateral cooperation in the fight against the Covid pandemic, including humanitarian assistance extended by both countries to each other in critical times of need.

The leaders discussed regional and global developments, including the post-pandemic global economic recovery, and the situation in Afghanistan. They agreed that both countries share common perspectives and concerns on Afghanistan and appreciated the bilateral roadmap charted out at the NSA level for consultation and cooperation on Afghanistan. They noted that both sides shared common positions on many international issues and agreed to further strengthen cooperation at multilateral fora, including at the UN Security Council. President Putin congratulated Prime Minister Modi for India’s ongoing non-permanent membership of the UN Security Council and successful Presidency of BRICS in 2021. Prime Minister Modi congratulated Russia for its ongoing chairmanship of the Arctic Council.

The Joint Statement titled India-Russia: Partnership for Peace, Progress and Prosperity aptly covers the state and prospects of bilateral ties. Coinciding with the visit, several Government-to-Government Agreements and MoUs, as well as those between commercial and other organizations of both countries, were signed in different sectors such as trade, energy, science & technology, intellectual property, outer space, geological exploration, cultural exchange, education, etc. This is a reflection of the multifaceted nature of our bilateral partnership.

President Putin extended an invitation to Prime Minister Modi to visit Russia for the 22nd India-Russia Annual Summit in 2022.

On the accession Prime Minister Shri Narendra Modi said that Despite the challenges posed by Covid, the pace of relations between India and Russia has not changed. Our Special and Privileged Strategic Partnership has been continuously strengthening. He added, the fight against Covid has also seen excellent cooperation between the two countries – whether in vaccine trials and production, in humanitarian assistance, or in the repatriation of each other’s citizens.