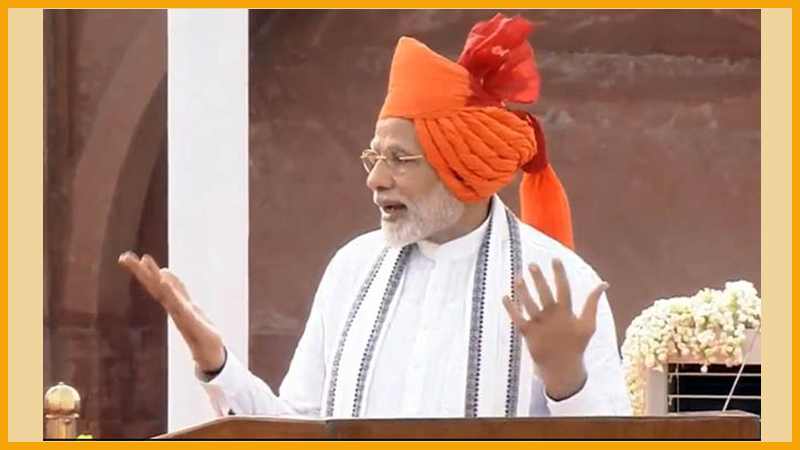 The Prime Minister, Shri Narendra Modi on 15th August addressed the nation from the ramparts of the Red Fort, on the occasion of the 72nd Independence Day. In his address asserting that India is today brimming with self-confidence, the Prime Minister mentioned developments such as the success of Navika Sagar Parikrama by six young women naval officers, and the achievements of young Indian sportspersons from humble backgrounds.

He mentioned the blooming of Neelakurinji flowers in the Nilgiri hills, a phenomenon that occurs once every 12 years. He said that the recently concluded session of Parliament, was one dedicated to the cause of social justice. He noted that India is now the world’s sixth largest economy.

The Prime Minister paid homage to the freedom fighters and martyrs. He saluted the jawans of the security forces and police forces. He recalled in particular, the martyrs of the Jallianwala Bagh massacre, which happened on Baisakhi day in 1919. He offered condolences to people affected by floods in some parts of the country.

He quoted poet Subramaniam Bharti to say that India will show the world the path to freedom from all kinds of shackles. He said such dreams were shared by countless freedom fighters. And an inclusive Constitution was drafted by Babasaheb Ambedkar to achieve this dream of a nation where there is justice for the poor, and equal opportunities for all to move forward. He said that Indians are now coming together to build the nation. He gave examples of the pace of development in various fields such as toilet construction, electricity reaching villages, LPG gas connections, house construction etc.

The Prime Minister mentioned how international organizations and agencies were looking at India very differently today, as compared to 2013. He said that from a time of “policy paralysis”, India had moved to “Reform, Perform, Transform.” He said India is now a member of several important multilateral organizations, and is leading the International Solar Alliance.

The Prime Minister said that the North-East is today in the news for achievements in sports, for connecting the last unconnected villages with electricity, and for becoming a hub of organic farming.

The Prime Minister said that India is proud of its scientists. He announced “Gagan-Yaan” a manned space mission, to be undertaken by India by 2022, using its own capabilities. He said India would become the fourth nation in the world to do so.
Reiterating the vision to double farmers’ incomes by 2022, the Prime Minister asserted that the aim is to accomplish tasks which seem extremely difficult. He said initiatives such as Ujjwala Yojana and Saubhagya Yojana are providing dignity to the people.

He said organizations such as the WHO have appreciated the progress made in the Swachh Bharat Mission.
Shri Narendra Modi announced the launch of the Pradhan Mantri Jan Arogya Abhiyaan on 25th September this year – the anniversary of Pandit Deendayal Upadhyay. It is high time we ensure that the poor of India get access to good quality and affordable healthcare, he asserted. He said this scheme would positively impact 50 crore people.

The Prime Minister explained how better targeting of government benefits has been achieved by weeding out about 6 crore fake beneficiaries. The honest taxpayer of India has a major role in the progress of the nation, he said, adding that it is due to them that so many people are fed, and the lives of the poor are transformed.

The Prime Minister asserted that the corrupt, and those who have black money would not be forgiven. He said that Delhi’s streets are now free from power brokers, and the voice of the poor is heard.

The Prime Minister announced that women officers of Short Service Commission in the Indian Armed Forces would now be eligible for permanent commission through a transparent selection process.

Noting that the practice of Triple Talaq has caused great injustice among Muslim women the Prime Minister assured Muslim women that he will will work to ensure that justice is done to them.

The Prime Minister spoke of the decline in Left Wing Extremism in the country. He reiterated former Prime Minister Atal Bihari Vajpayee’s vision of “Insaniyat, Jamhooriyat, Kashmiriyat,” for the State of Jammu and Kashmir.

He said that he is impatient, anxious and keen to see India.