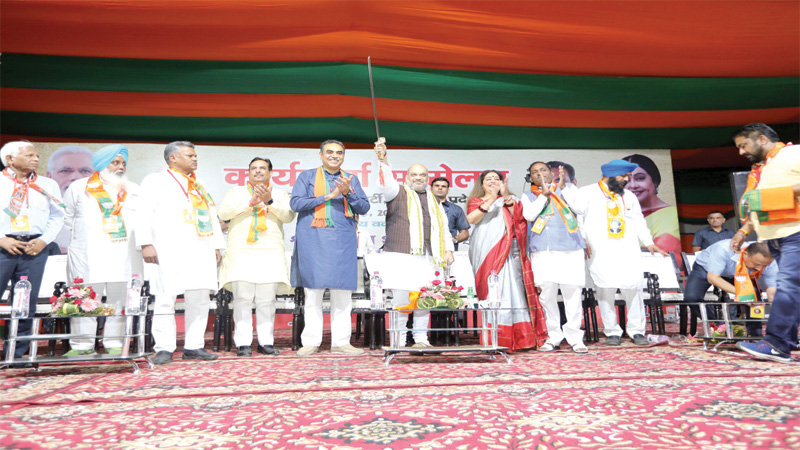 With only last two phases of voting left, campaigning is reaching a hectic pitch in India. Elections are yet to be held in 118 seats, with most of them in the crucial Hindi heartland. In a whirlwind tour BJP National President Shri Amit Shah has been addressing rallies in every part of the country and several rallies are also scheduled in crucial states like West Bengal, where the BJP is going to break all records. Shri Shah’s jam packed massive rallies and the responsive gathering reveals that BJP will come out with flying colors this time with more seats than 2014. We are publishing the excerpts of various speeches of BJP National President Shri Amit Shah for our readers.

BJP National President Shri Amit Shah asserted that India will emerge as a superpower in the next five years if Shri Narendra Modi becomes the Prime Minister again.

Addressing a massive gathering in Chandigarh, on 05 May, 2019 Shri Shah said the country was secure only under the Modi rule.

“I have come here to say if you make Shri Narendra Modi PM again, India will emerge as a superpower in the world in next five years,” the BJP President told the gathering. He was campaigning for BJP nominee and sitting MP from Chandigarh, Smt. Kirron Kher.

Dubbing the Congress-led opposition ‘Mahamilavati Mahagathbandhan’, Shri Shah reiterated that only Shri Narendra Modi can keep the country secure. “On one side, BJP and its alliance partners, and on the other hand, there is ‘Mahamilavat Mahagathbandhan’ whose leader is Rahul Gandhi. Can they secure the country? Can they work for welfare of poor? Can they give a strong reply to terrorism? Can they give a strong reply to Pakistan?” he asked.

The BJP President said the 2019 Lok Sabha elections were being fought not only for development. “Development of poor, villages, farmers, cities will be carried out by Shri Modi. But the job of securing the country can only be done by Modi ji and one other,” he said.

–Shri Shah raised the issue of Balakot strikes and attacked the Congress for seeking proof of the strikes.

–He also vowed to scrap Article 370 (granting special status to Jammu and Kashmir) while asserting that Kashmir will always remain an integral part of India.

–He said Chandigarh become kerosene-free city and every house here has LPG cylinder, he said,

–He said Direct benefit transfer was introduced in the Public Distribution Scheme (PDS).

–Chandigarh was also included in the first list of smart cities

–Now work was carried out towards making the Chandigarh Railway Station as a model station.

–He said flats were constructed for 5,000 slum dwellers at the cost of Rs 155 crore.

–For urban transportation, buses were purchased for Rs. 37 crore.

–An amount of Rs. 42 crore was spent in sector 17 and an administrative building is being set up here at the cost of Rs 72 crore, Shri Shah added.