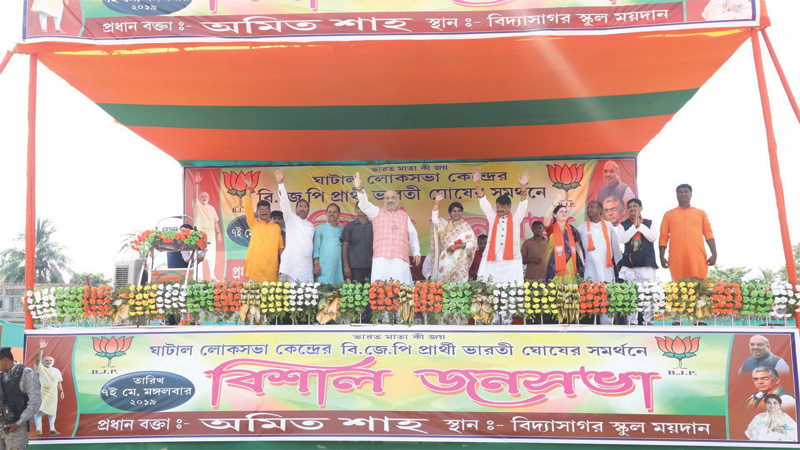 BJP National President Shri Amit Shah said that West Bengal Chief Minister Mamata Banerjee is not allowing people to chant ‘Jai Shri Ram’ in the state, and wondered if the Lord’s name cannot be taken in India, will it be uttered in Pakistan.
Speaking at an election rally in Ghatal, on 07 May, 2019 he said that polls in West Bengal are for restoring democracy in the state, where the BJP will win more than 23 seats out of the total 42 Lok Sabha seats.

“Lord Ram is a part of the culture of India… Can anybody stop people from taking his name? I want to ask Mamata didi, if Shri Ram’s name is not taken in India, will it be chanted in Pakistan?” Shri Shah said.

A video had appeared in the social media that showed Banerjee stopping her car at a place in West Midnapore district, and chasing some persons who chanted ‘Jai Shri Ram’ as her carcade was crossing the area.

“The Narendra Modi government has given Rs. 4,24,800 crore to West Bengal in its five-year tenure, but it has not reached the people, and, instead, gone to the syndicates,” Shri Shah claimed.

He said the UPA-II government under the then prime minister Manmohan Singh had granted only around Rs. 1,32,000 crore to the state.

At another election meeting at Keshiari in Paschim Medinipur district, he said, “What wrong has PM Shri Narendra Modi done by saying that the Bofors scam happened during Rajiv Gandhi’s tenure.” The BJP President was referring to Shri Modi’s recent remarks at a rally in Uttar Pradesh, where he said that Rajiv Gandhi’s life ended as “bhrashtachari no. 1” (corrupt no.1).

“Rahul baba says his father has been insulted. Is it an insult to be reminded of what had happened?” he said.

Shri Shah also asked Rahul Gandhi whether or not the Bofors scandal, the Bhopal gas tragedy, blunder of sending peacekeeping force to Sri Lanka or the massacre of Kashmiri pandits happen during his father’s tenure as prime minister from 1984 to 1989.

He said that the Congress and its partners in the ‘Mahagathbandhan’ have abused Modi on 51 different occasions.

The BJP President reiterated BJP’s resolve to implement the National Register of Citizens (NRC) in West Bengal to flush out illegal migrants from Bangladesh.