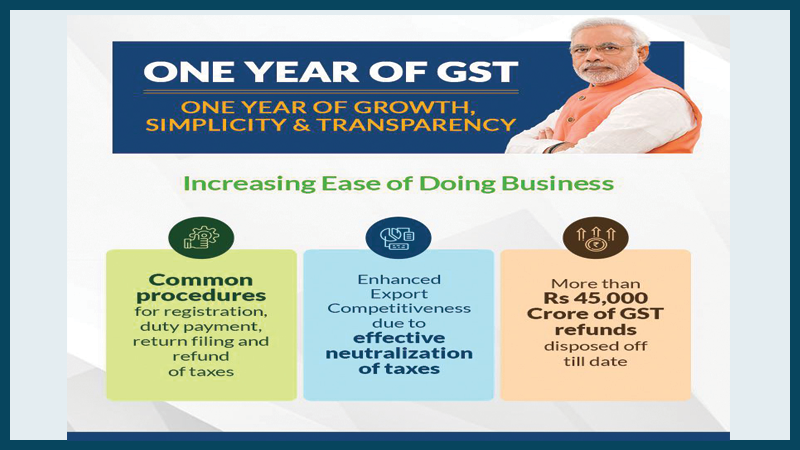 Government of India celebrated the 1st GST Day on July 01 in Delhi. The event saw an address on the eventful 1st year journey of GST over a live video link by Union Minister, Shri Arun Jaitley. Union Minister for Railways, Coal, Finance & Corporate Affairs, Shri Piyush Goyal presided over as the Chief Guest of the event and Minister of State for Finance, Shri Shiv Pratap Shukla was the Guest of Honour.

Addressing the distinguished gathering via video link, Shri Arun Jaitley recalled the pre-GST taxation system in India was one of the most complicated tax systems in the world. Multiple taxes, multiple returns to be filed by assesees, interface with multiple tax authorities, cascading effect of taxes, rising inflation, no free flow of goods across the country, fragmented markets across the country, inter alia, were some of the tenuous issues plaguing the indirect taxation system in India. GST has persuaded people to do businesses in a transparent manner without evading taxes, Shri Jaitley added.

Shri Jaitley said that GST had an unequivocal support of the Prime Minister of India, hence the Union Government could work closely with the States in a coordinated and collaborative fashion to make GST a success. “We analysed reasons why past Governments could not implement the GST. We resolved all issues raised by the States and assured them the immunity from fall in their revenue collection. The GST Council is India’s first consensus based federal decision making body”, the Minister said.

Listing out the remarkable successes that the GST has achieved in a short span of 1 year, Shri Jaitley said that this reform has created a unified market, the cascading of taxes has been eliminated, the weighted average of total taxation basket has come down, the GST Council is working upon continuous rationalisation of tax slabs, advance direct tax payments increased as result of successful implementation of GST, among others. The Minister informed that the total indirect tax collection for 9 month period in previous financial year post implementation of GST is about Rs. 8.2 lakh crores, which if extrapolated for the whole year comes to about Rs. 11 lakh crores, an 11.9% increase in indirect tax collections.

Talking about the capacity to rationalise present GST slabs, Shri Jaitley said that the GST Council is constantly working in that direction and the desired rationalisation will come with the setting in of the stability of GST system, increasing tax collections through curbing tax evasion and increasing the tax net. The Minister said that according to his projection, an increase of 1.5% in indirect tax collections is expected in the Non oil category, which will facilitate the automatic rationalisation of tax slabs in near future.

In his conclusion, Shri Jaitley thanked the Finance Ministers and officers of different States without whose cooperation GST could not have been a success that it is today. Though GST has given a lot of reasons to cheer about with its first year achievements, the best of GST in terms of its contribution to the society is yet to come, the Minister added.

Speaking on the occasion, Union Minister for Railways, Coal, Finance and Corporate Affairs, Shri Piyush Goyal congratulated all stakeholders, including State leaderships involving different political parties, officers, trade and industry, who have strived hard in making GST a success. GST is a symbol of cooperative and collaborative federalism, and GST day is a day of 1.25 billion Indians, it’s a cause for celebration. We should compliment each other for its grand success, the Minister said.

Speaking about the magnitude of the path breaking tax reform, Shri Goyal said that Dr. Ambedkar stitched the Nation through one Constitution, Sardar Patel bonded the fragmented Nation geographically, now GST is a landmark reform that has transformed the Nation into an economic union with the motto ‘ONE NATION, ONE TAX, ONE MARKET’. No other Nation in the world, so huge, with so many regional socio-economic and political interests has been able to implement such a tax reform ever in history, he added.

This reform has put an end to the illegal activities like tax evasion by simplifying the tax administration and bringing a transformation in the culture among trade and industry in the country towards faithful payment of indirect taxes. The youth of India has embraced the reform with open hands. This tax reform is dedicated to the young generation of India who want to conduct their businesses in a legal and transparent fashion, Shri Goyal said.
Terming GST as a Game changer for small businesses, Shri Goyal said that enterprises having a turnover of Rs. 20 lakhs are exempted from GST and those with a turnover upto Rs. 1 crore have to pay 1% tax. In the coming monsoon session the Government is proposing to bring an amendment to extend this limit to businesses with Rs. 1.5 crores turnover, he informed.

Speaking on reduction of tax slabs under GST, Shri Goyal clarified that the different tax slabs have been decided after due deliberations in the GST Council, keeping in mind the socio-economic make up of this country. The Minister encouraged citizens of the country to help the Government to eliminate the culture of tax evasion and contribute whole heartedly in the success of GST and development of this country.

@narendramodi      t
I congratulate the people of India on the special occasion of GST completing 1 year. A vibrant example of cooperative federalism and a ‘Team India’ spirit, GST has brought a positive change in the Indian economy. #GSTForNewIndia

@AmitShah          t
I congratulate PM @narendramodi and his government on successful completion of one year of implementing GST, a historic tax reform. India, specially small businesses, have benefitted immensely from this new tax regime, which has brought transparency & convinence. #GSTForNewIndia.