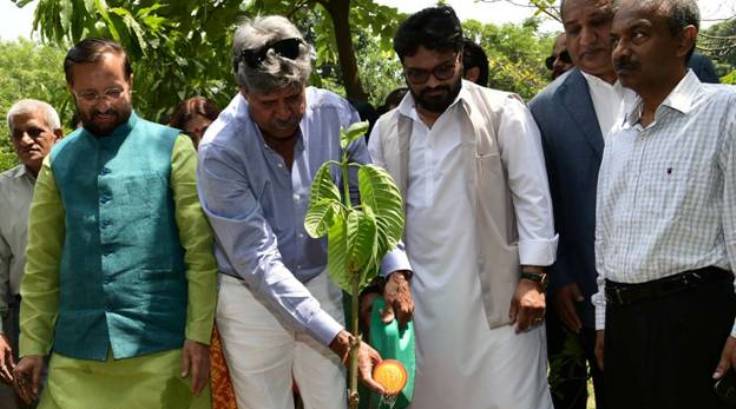 Union Minister Shri Prakash Javadekar on World Environment Day said that his ministry will soon launch an initiative called School Nursery across the country in which school kids will plant a seed, nurture the sapling and on his/her annual result would take the plant to be a trophy. “In this initiative, the local forest department will provide the necessary support, and through this initiative we want to nurture a perpetual bond between school kids and plants.”, Shri Javadekar said.

As a part of the campaign #SelfieWithSapling launched today Shri Javadekar planted saplings in the premises of Environment Ministry in New Delhi along with the Minister of State in the Environment Ministry Shri Babul Supriyo, renowned cricketer Shri Kapil Dev, Bollywood actors Shri Jackie Shroff and Shri Randeep Hooda and noted singer Smt. Malini Awasthi. They all gave out the message of environment protection and importance of planting a sapling.  Shri Javadekar urged all to join and plant a sapling and post the selfie with the sapling on social media.

Union Minister also praised the commitment of Union Transport Minister Shri Nitin Gakari for pledging to plant 125 crore trees on both sides of National Highways, which runs through thousands of kilometers across the country.

The World Environment Day (WED) urges governments, industries, communities and individuals to come together to explore renewable energy, green technologies and improve air quality in cities and regions across the world. The celebration of this day provides us with an opportunity to broaden the basis for an enlightened opinion in preserving and enhancing the environment. World Environment Day is the biggest annual event for positive environmental action and takes place every year on 5th June.

World Environment Day 2019 is being hosted by China this year with a theme of “Air Pollution”. Air pollution is the biggest environmental health risk of our time. Airborne pollutants are responsible for about one third of deaths from stroke, chronic respiratory disease, and lung cancer, as well as one quarter of deaths from heart attack. Air pollution is also fundamentally altering our climate, with profound impacts on the health of the planet. India hosted the last year’s World Environment Day emphasizing on prevention of ‘Plastic Pollution’.

India has formulated and launched the National Clean Air Programme (NCAP). This is a long term and time bound national level strategy to tackle the increasing pollution problem across the country. The objective of NCAP is comprehensive plan for prevention, control and abatement of air pollution besides augmenting the air quality monitoring network. The tentative national level target is reduction of PM2.5 and PM10 concentration by 20% – 30% by 2024. The focus of this year WED is on the identified 102 Non attainment cities across the country.