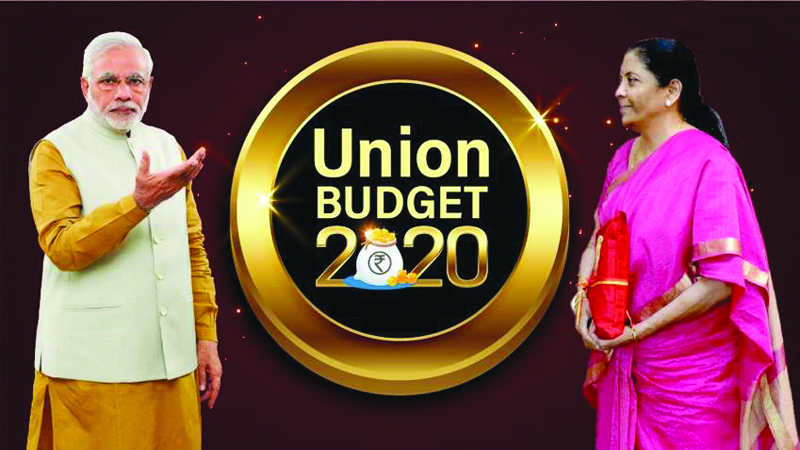 Union Finance Minister Smt. Nirmala Sitharaman presented the first Union Budget of the Modi Government 2.0 and first Budget of the third decade of 21st century on 01 February, 2020 at Parliament House in New Delhi and unveiled a series of far-reaching reforms, aimed at energizing the Indian economy through a combination of short-term, medium-term, and long term measures.

The Union Budget has been structured on the overall theme of “Ease of Living.” This has been achieved by farmer friendly initiatives such as Agriculture credit target of Rs 15 lakh crore for 2020-21; schemes of “Kisan Rail” and “Krishi Udaan” for a seamless national cold supply chain for perishables; and expansion of PM-KUSUM to provide 20 lakh farmers for setting up stand-alone solar pumps.

In the health sector, the Budget proposes more than 20,000 empanelled hospitals under PM Jan Arogya Yojana for poor people; and expansion of Jan Aushadhi Kendra Scheme to all districts offering 2000 medicines and 300 surgical by 2024.

Infrastructure receives a boost, with 100 more airports by 2024 to support Udaan scheme; and operation of 150 passenger trains to be done through PPP mode.

Starting apprenticeship embedded courses through 150 higher educational institutions by March 2021 and a proposal to establish Indian Institute of Heritage and Conservation are some of the other major highlights.
The Finance Minister said that the Union Budget Aims: To achieve seamless delivery of services through Digital governance, to improve physical quality of life through National Infrastructure Pipeline, Risk mitigation through Disaster Resilience and Social security through Pension and Insurance penetration.

The budget is woven around three prominent themes:

On Education and Skill front, the Finance Minister said Rs 99,300 crore is being allocated in 2020-21 and Rs 3000 crores for skill development. New Education Policy will be announced soon. About 150 higher educational institutions will start apprenticeship embedded degree/diploma courses by March 2021. Degree level full-fledged online education programme to be started. Under its “Study in India” programme, an Ind-SAT is proposed to be held in Asian and African countries.

Referring to the theme of Economic Development, the Finance Minister said that Rs 27300 crore would be allocated for development and promotion of Industry and Commerce for the year 2020-21. An Investment Clearance Cell will be set up to provide “end to end” facilitation. It is proposed to develop five new smart cities in collaboration with States in PPP mode.

On Infrastructure sector as highlighted by the Prime Minister that Rs 100 lakh crore would be invested over the next 5 years, National Infrastructure Pipeline was launched on 31st December 2019 of Rs 103 lakh crore. It consists of more than 6500 projects across sectors and are classified as per their size and stage of development. She said that about Rs 22,000 crore has already been provided as support to Infrastructure Pipeline. Accelerated development of highways will be undertaken. This will include

development of 2500 Km access control highways, 9000 Km of economic corridors, 2000 Km of coastal and land port roads and 2000 Km of strategic highways. Delhi-Mumbai Expressway and two other packages to be completed by 2023. Chennai-Bengaluru Expressway also be started.

Harping on the theme of Caring Society, the Finance Minister said that Rs 35,600 crore proposed for nutrition-related programmes for the financial year 2020-21. Rs 28,600 crore proposed for programs that are specific to women. Moreover, Rs 85000 crore would be allocated towards the welfare of Scheduled Castes and Other Backward classes for 2020-21. Similarly, for furthering development and welfare of Scheduled Tribes, Rs 53,700 crore is proposed for 2020-21. She said, the government is mindful of the concerns of senior citizens and Divyang.

On Environment, States that are formulating and implementing plans for ensuring cleaner air in cities above one million to be encouraged. Parameters for the incentives to be notified by the Ministry of Environment, Forests and Climate change and the allocation for this purpose is Rs 4,400 crore for 2020-21.

The Finance Minister said that In the last few years, Government of India has infused about Rs 3,50,000 crore by way of capital into Public Sector Banks for regulatory and growth purposes. Governance reforms would be carried out in these banks, so that they become more competitive.

Government has already approved consolidation of 10 banks into four. Further, the Deposit Insurance and Credit Guarantee Corporation (DICGC) has been permitted to increase Deposit Insurance Coverage for a depositor, which is now Rs one lakh to Rs five lakh per depositor.

Finance Minister Smt. Nirmala Sitharaman said that the Union Government has spearheaded radical fiscal measures to ensure that India’s economy continues to tread the path of high growth. She said that to make sure India stays globally competitive and a favoured destination for investment, a bold historic decision was taken to reduce the corporate tax rate for new companies in the manufacturing sector to an unprecedented level of 15%. For existing companies, the rate has been brought down to 22%. As a result, our corporate tax rates are now amongst the lowest in the world.

The Finance Minister said that in continuation of the reform measures already taken so far, the tax proposals in this budget introduce further reforms to stimulate growth, simplify tax structure, bring ease of compliance, and reduce litigations.

The proposed changes in tax slabs are listed in the following table :

In the new tax regime, substantial tax benefit will accrue to a taxpayer depending upon exemptions and deductions claimed by him. For example, a person earning Rs. 15 lakh in a year and not availing any deductions etc., will pay only Rs. 1,95,000 as compared to Rs. 2,73,000 in the old regime. Thus, his tax burden shall be reduced by Rs. 78,000 in the new regime. He would still be the gainer in the new regime, even if he was taking deduction of Rs. 1.5 Lakh under various sections of Chapter VI-A of the Income Tax Act under the old regime. The new tax regime shall be optional for taxpayers.

In order to reduce the compliance burden on small retailers, traders, shopkeepers who comprise the MSME sector, the Finance Minister has proposed to raise by five times, the turnover threshold for audit from the existing Rs. 1 crore to Rs. 5 crore.

Under the proposed ‘Vivad se Vishwas’ scheme, a taxpayer would be required to pay only the amount of the disputed taxes and will get complete waiver of interest and penalty, provided he pays by 31st March, 2020. Those who will avail the scheme after 31st March, 2020 will have to pay some additional amount. The scheme will remain open till 30th June 2020.

A simplified GST return shall be implemented from the 1st April, 2020. It will make return filing simple with features like SMS based filing for nil return, return pre-filling, improved input tax credit flow and overall simplification. Dynamic QR-code is proposed for consumer invoices. GST parameters will be captured when payment for purchases is made through the QR-code.

To give impetus to domestic industry, and to generate resource for health services Finance Minister Smt. Nirmala Sitharaman proposed to impose a nominal health cess of 5% on imports of specified medical equipment.
Basic customs duty on imports of newsprint and light-weight coated paper is being reduced from 10% to 5%. An increase is proposed in National Calamity Contingent Duty (NCCD) on Cigarettes and Tobacco products. NCCD on Bidis remains unchanged.