Prime Minister Shri Narendra Modi is known for his inspirational and exemplary ideas and this is what makes him different from other politicians. Shri Modi has held various constitutional posts in the last 21 years and during these years he started many new traditions. Keeping in with one of his tradition of spending Diwali with armed forces, the Prime Minister spent this Diwali with the forces in Kargil on 24 October.

Since assuming office in 2014, the Prime Minister has been celebrating Diwali by spending time with soldiers in the forward areas in states like Uttarakhand, Himachal Pradesh, Rajasthan, Punjab, and the UT of Jammu & Kashmir.

PM celebrate Diwali with Armed Forces in the same spirit as we celebrate with our near and dear ones. He gifts sweets and other gifts to the jawans. The PM has celebrated Diwali with soldiers every year to bring some joy to the lives of the armed forces personnel posted at some of the remotest security check posts.

Addressing the brave jawans this year, the Prime Minister said that the reverence for the soil of Kargil always draws him towards the brave sons and daughters of the armed forces. “For years, you have been a part of my family”. PM underlined that the sweetness of Diwali increases in the presence of the jawans and the light of Diwali that is present among them emboldens his spirit.

Shri Modi explained that it is the result of India successfully taking the fight against both external and internal enemies. “You are standing as a shield on the border while strict action is being taken against the enemies within the country.” Shri Modi pointed out that the country has made a successful attempt to uproot terrorism, Naxalism and extremism.

Throwing light on the advancement in technologies in modern warfare, the Prime Minister remarked that the nature of future wars is going to change and in this new era, we are preparing the military strength of the country according to the new challenges, new methods and changing requirements of national defence.

The Prime Minister underlined that the eyes of the whole world today are on India and its growth potential. Shri Modi said that the Azadi Ka Amrit Kaal is going to be a real witness to this power of India. “Your role in this is huge because you are the Pride of India”, the Prime Minister remarked. He concluded his address by reciting a poem dedicated to the jawans of the Indian Armed Forces.

“On one side there are the sovereign borders of the nation, and on the other committed soldiers. On one we have the love of the soil of the motherland, and on the other, there are braveheart jawans. I could not have expected a Diwali of such magnitude anywhere else”
– PM Shri Narendra Modi

In continuation with the tradition, the prime minister celebrated the Festival of Light in Jammu’s Nowshera sector last year in November 2021 with soldiers. He paid tributes to soldiers who lost their lives in the line of duty, at Nowshera along the Line of Control (LoC) in the Rajouri district.

In 2020, he spent Diwali with soldiers at Longewala in Rajasthan’s Jaisalmer. “Diwali is a festival we celebrate with family, and with those, we call our own… so each year I spend time with you all because you all are my own, my family. I bring sweets for you all today. But these are not just from me. It is from all 130 crore Indians,” Modi said.

Similarly, in 2019, the year PM Modi won for second time, he celebrated the festival with troops deployed in Jammu and Kashmir’s Rajouri. In 2018, he had halted at the Harsil station to spend time with ITBP jawans and exchanged Diwali wishes while returning from Kedarnath temple in Uttarakhand.

While in 2017, he visited Gurez sector of north Kashmir along the Line of Control where he spent almost two hours celebrating the festival with troops posted in the forward area. In 2016, he celebrated it with armed forces in a remote and strategic area in Himachal Pradesh, adjoining the Chinese border.

In 2015, PM Modi military installations associated with the 1965 Indo-Pak war in Punjab where he praised their “valour and character”.

In 2014, the year he was elected, the Prime Minister started his Diwali day with soldiers in Siachen, which is the world’s highest battlefield, to boost the morale of the troops guarding the icy peaks. In his address, the PM praised their valour and courage of the soldiers. 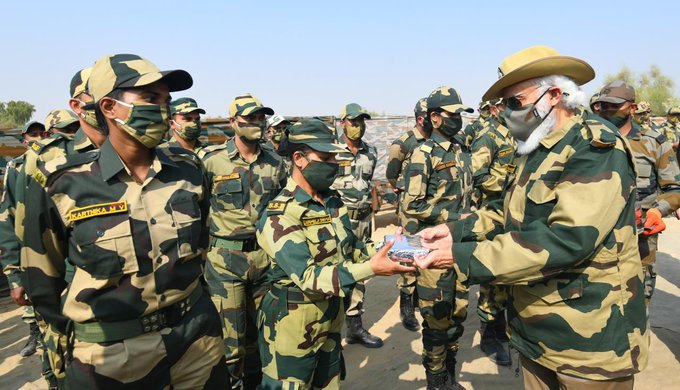 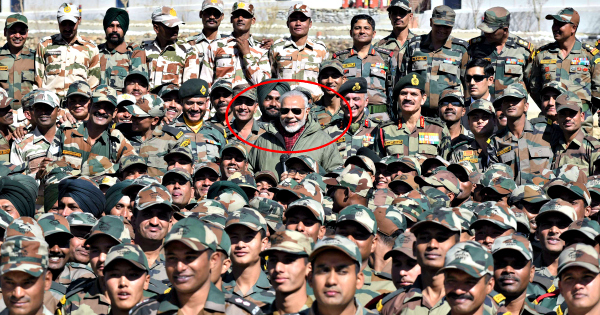 PM Shri Modi started his Diwali day with soldiers in Siachen, which is the world’s highest battlefield.