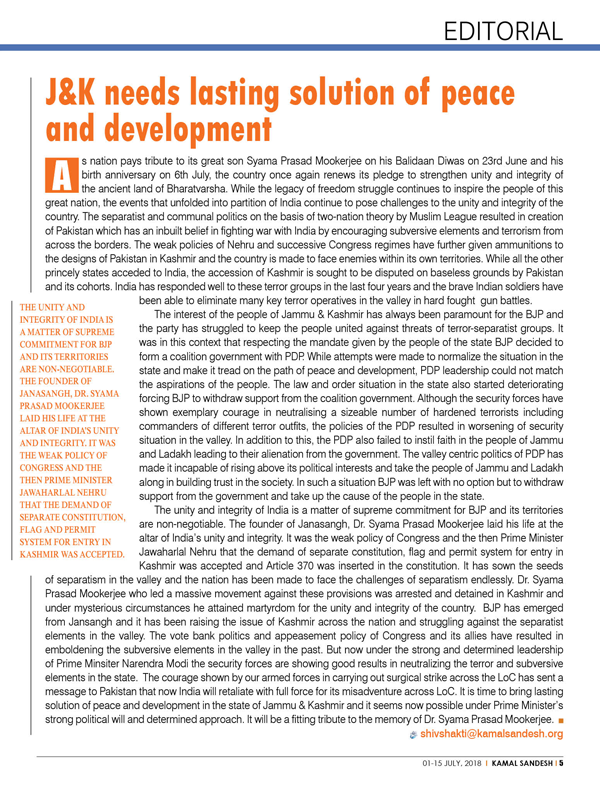 As nation pays tribute to its great son Syama Prasad Mookerjee on his Balidaan Diwas on 23rd June and his birth anniversary on 6th July, the country once again renews its pledge to strengthen unity and integrity of the ancient land of Bharatvarsha. While the legacy of freedom struggle continues to inspire the people of this great nation, the events that unfolded into partition of India continue to pose challenges to the unity and integrity of the country. The separatist and communal politics on the basis of two-nation theory by Muslim League resulted in creation of Pakistan which has an inbuilt belief in fighting war with India by encouraging subversive elements and terrorism from across the borders. The weak policies of Nehru and successive Congress regimes have further given ammunitions to the designs of Pakistan in Kashmir and the country is made to face enemies within its own territories. While all the other princely states acceded to India, the accession of Kashmir is sought to be disputed on baseless grounds by Pakistan and its cohorts. India has responded well to these terror groups in the last four years and the brave Indian soldiers have been able to eliminate many key terror operatives in the valley in hard fought gun battles.

The interest of the people of Jammu & Kashmir has always been paramount for the BJP and the party has struggled to keep the people united against threats of terror-separatist groups. It was in this context that respecting the mandate given by the people of the state BJP decided to form a coalition government with PDP. While attempts were made to normalize the situation in the state and make it tread on the path of peace and development, PDP leadership could not match the aspirations of the people. The law and order situation in the state also started deteriorating forcing BJP to withdraw support from the coalition government. Although the security forces have shown exemplary courage in neutralising a sizeable number of hardened terrorists including commanders of different terror outfits, the policies of the PDP resulted in worsening of security situation in the valley. In addition to this, the PDP also failed to instil faith in the people of Jammu and Ladakh leading to their alienation from the government. The valley centric politics of PDP has made it incapable of rising above its political interests and take the people of Jammu and Ladakh along in building trust in the society. In such a situation BJP was left with no option but to withdraw support from the government and take up the cause of the people in the state.

The unity and integrity of India is a matter of supreme commitment for BJP and its territories are non-negotiable. The founder of Janasangh, Dr. Syama Prasad Mookerjee laid his life at the altar of India’s unity and integrity. It was the weak policy of Congress and the then Prime Minister Jawaharlal Nehru that the demand of separate constitution, flag and permit system for entry in Kashmir was accepted and Article 370 was inserted in the constitution. It has sown the seeds of separatism in the valley and the nation has been made to face the challenges of separatism endlessly. Dr. Syama Prasad Mookerjee who led a massive movement against these provisions was arrested and detained in Kashmir and under mysterious circumstances he attained martyrdom for the unity and integrity of the country. BJP has emerged from Jansangh and it has been raising the issue of Kashmir across the nation and struggling against the separatist elements in the valley. The vote bank politics and appeasement policy of Congress and its allies have resulted in emboldening the subversive elements in the valley in the past. But now under the strong and determined leadership of Prime Minsiter Narendra Modi the security forces are showing good results in neutralizing the terror and subversive elements in the state. The courage shown by our armed forces in carrying out surgical strike across the LoC has sent a message to Pakistan that now India will retaliate with full force for its misadventure across LoC. It is time to bring lasting solution of peace and development in the state of Jammu & Kashmir and it seems now possible under Prime Minister’s strong political will and determined approach. It will be a fitting tribute to the memory of Dr. Syama Prasad Mookerjee.