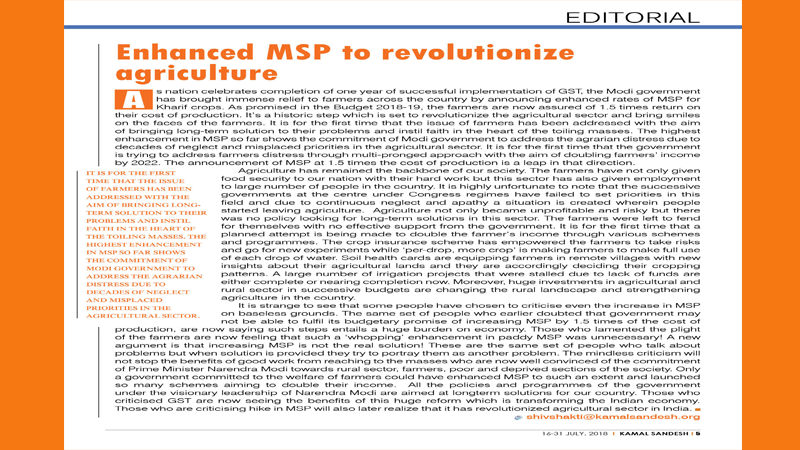 As nation celebrates completion of one year of successful implementation of GST, the Modi government has brought immense relief to farmers across the country by announcing enhanced rates of MSP for Kharif crops. As promised in the Budget 2018-19, the farmers are now assured of 1.5 times return on their cost of production. It’s a historic step which is set to revolutionize the agricultural sector and bring smiles on the faces of the farmers. It is for the first time that the issue of farmers has been addressed with the aim of bringing long-term solution to their problems and instil faith in the heart of the toiling masses. The highest enhancement in MSP so far shows the commitment of Modi government to address the agrarian distress due to decades of neglect and misplaced priorities in the agricultural sector. It is for the first time that the government is trying to address farmers distress through multi-pronged approach with the aim of doubling farmers’ income by 2022. The announcement of MSP at 1.5 times the cost of production is a leap in that direction.

Agriculture has remained the backbone of our society. The farmers have not only given food security to our nation with their hard work but this sector has also given employment to large number of people in the country. It is highly unfortunate to note that the successive governments at the centre under Congress regimes have failed to set priorities in this field and due to continuous neglect and apathy a situation is created wherein people started leaving agriculture.  Agriculture not only became unprofitable and risky but there was no policy looking for long-term solutions in this sector. The farmers were left to fend for themselves with no effective support from the government. It is for the first time that a planned attempt is being made to double the farmer’s income through various schemes and programmes. The crop insurance scheme has empowered the farmers to take risks and go for new experiments while ‘per-drop, more crop’ is making farmers to make full use of each drop of water. Soil health cards are equipping farmers in remote villages with new insights about their agricultural lands and they are accordingly deciding their cropping patterns. A large number of irrigation projects that were stalled due to lack of funds are either complete or nearing completion now. Moreover, huge investments in agricultural and rural sector in successive budgets are changing the rural landscape and strengthening agriculture in the country.

It is strange to see that some people have chosen to criticise even the increase in MSP on baseless grounds. The same set of people who earlier doubted that government may not be able to fulfil its budgetary promise of increasing MSP by 1.5 times of the cost of production, are now saying such steps entails a huge burden on economy. Those who lamented the plight of the farmers are now feeling that such a ‘whopping’ enhancement in paddy MSP was unnecessary! A new argument is that increasing MSP is not the real solution! These are the same set of people who talk about problems but when solution is provided they try to portray them as another problem. The mindless criticism will not stop the benefits of good work from reaching to the masses who are now well convinced of the commitment of Prime Minister Narendra Modi towards rural sector, farmers, poor and deprived sections of the society. Only a government committed to the welfare of farmers could have enhanced MSP to such an extent and launched so many schemes aiming to double their income.  All the policies and programmes of the government under the visionary leadership of Narendra Modi are aimed at longterm solutions for our country. Those who criticised GST are now seeing the benefits of this huge reform which is transforming the Indian economy. Those who are criticising hike in MSP will also later realize that it has revolutionized agricultural sector in India.