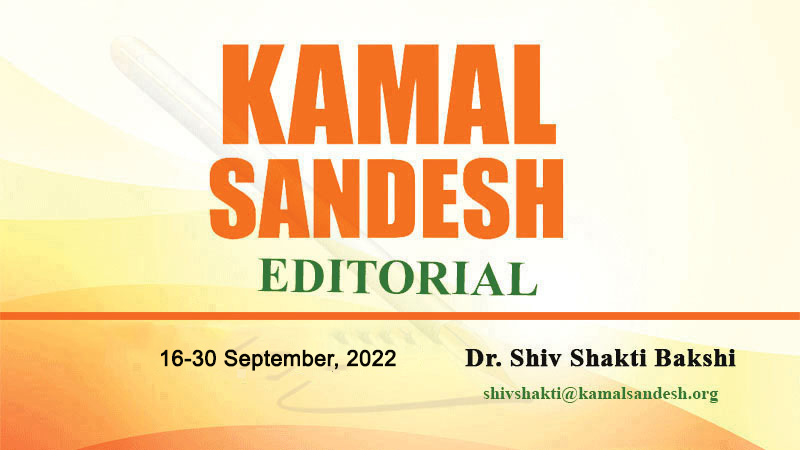 As ‘Rajpath’ turns into ‘Kartavya Path’, the nation moves forward to fulfil its commitment to ‘panch pran’. The celebrations on the occasion of the renaming of Rajpath along with the installation of the statue of Netaji Subhash Chandra Bose at the India Gate canopy remind us of the emergence of a ‘New India’ which is looking forward to overcoming every kind of challenge in the ‘Amrit Kaal’. The glittering ceremony watched by millions across the nation has filled the nation with new enthusiasm and zeal to make its mark globally with a newfound energy and dynamism. Amid a festive atmosphere and the singing of inspirational songs set to the tunes of Indian musical instruments, the historic occasion was addressed by the Prime Minister, Shri Narendra Modi, who elaborated on the vision of a developed India, confident of meeting the aspirations of the people. The occasion marks a huge turning point in the history of the nation wherein a ‘New India’ through its actions seeks to march forward on the strength of its own while heralding a new era of national reconstruction.

The name ‘Rajpath’ which
was the Hindi translation
of the colonial ‘Kingsway’,
indicated a mindset that
wanted to rule over the
people while the name
‘Kartavyapath’ reminds
the citizens of the duty
expected of them in
realising the dreams
of a developed India

It is highly unfortunate to note that even after 75 years of independence, many symbols of slavery still exist in the country and are even glorified by some forces who want to stop the onward march of the Indian nation. The Prime Minister, Shri Narendra Modi, in his address to the nation from the ramparts of the Red Fort on Independence Day, has called on the nation to commit to ‘panch pran’ in the coming 25 years of the ‘Amrit Kaal’. Among the five ‘pran’, he clearly called for removing every trace of the colonial mindset while pursuing the goal of developed India. In the actions of the Modi government, one can see continuous efforts aimed at getting rid of the symbols of slavery. While Rajpath has been renamed as ‘Kartavya Path’ and Netaji statue occupies the place where the King George V statue was placed, many more initiatives have already been taken to pave the path of a ‘New India’. The renaming of Race Course Road to ‘Lok Kalyan Marg’, the echo of Indian patriotic songs at the Beating Retreat ceremony, the adoption of the symbol of Chhatrapati Shivaji Maharaj by the Indian Navy by removing the ensign of slavery; the building of the National War Memorial, the change in time and date of the presentation of the Indian Budget, which had followed the times of the British Parliament for so many decades; liberating the students from the compulsion of foreign language through NEP; and the abolition of many obsolete colonial laws are some of the initiatives taken by the Modi government to get rid of the slave mentality that has haunted India for so many decades.

While one of the ‘panch pran’ calls for removing all traces of the colonial mindset, another one calls for taking pride in the nation’s roots and the great legacy of India. It is in pursuance of this pledge that the legacy of the freedom movement, by building the Statue of Unity, renaming the islands of Andaman after Netaji Subhash Chandra Bose, building PM museum, museum for Tribal freedom fighters, Babasaheb’s ‘Panchtirtha’, imparting grandeur to cultural and civilizational centres across India are some of the efforts which are not only creating a robust cultural infrastructure in the country by modernising India with the spirit of ‘Amrit Kaal’. The name ‘Rajpath’ which was the Hindi translation of the colonial ‘Kingsway’, indicated a mindset that wanted to rule over the people while the name ‘Kartavyapath’ reminds the citizens of the duty expected of them in realising the dreams of a developed India. In his ‘panch pran’, the Prime Minsiter, Shri Narendra Modi, has immensely emphasised the importance of inculcating a strong sense of duty towards the nation. There is no doubt that the entire stretch from the National War Memorial to Kartavya Path and Rashtrapati Bhawan will fill the people with new inspiration, sense of duty, and energy and echo the mantra of ‘Nation First’ in everyone’s heart.