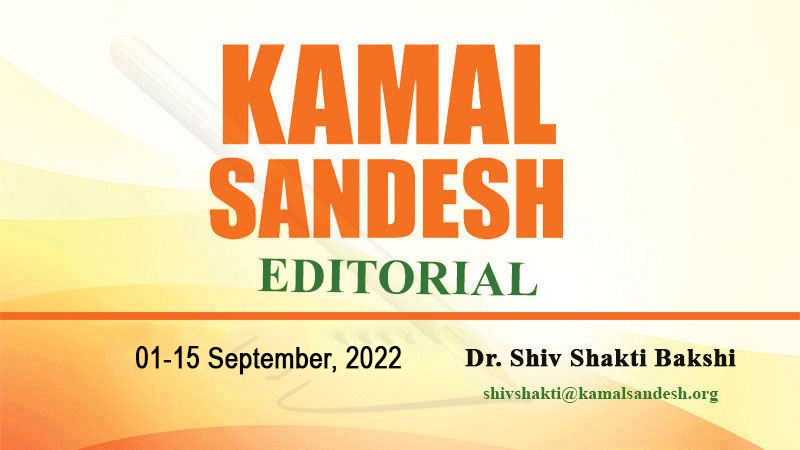 As the nation stepped into the ‘Amrit Kaal’, Prime Minister Shri Narendra Modi, in his historic address to the nation, laid the roadmap for a developed India by 2047. While addressing the nation from the ramparts of the Red Fort, the Prime Minister infused a new energy in the people with his enlightening vision, inspiring resolve and strong determination to march ahead tirelessly. The nationwide celebration of ‘Azadi Ka Amrit Mahotsav’ has already filled the people with renewed vigour and dynamism to pave the path of a ‘New India’. The ‘Har Ghar Tiranga Abhiyan’ has recreated the fervour similar to independence movement, imparting a newfound sense of responsibility among the millions who participated in the festival of freedom in every nook and corner of the country. Amid the grand celebrations of the ‘Azadi Ka Amrit Mahotsav’, the nation also remembered the dark chapter of partition on the ‘Partition Horror Remembrance Day’ on August 14, paying tribute to the millions who lost their lives and got uprooted from the homes of their ancestors. As the Prime Minster, Shri Narendra Modi, addressed the nation on August 15, 2022, the 76th Independence Day, the emergence of a New India, developed and self-reliant, prosperous and strong, relentless and dynamic, and, committed to the service of mankind in accordance with its ancient Indian precepts, could be seen on the horizon.

In an extremely important call, he urged the nation to pledge to end all forms of humiliation towards women, emphasising that no nation can achieve its goals unless it takes pride in the abilities of women

In his momentous address, Prime Minister Shri Narendra Modi has invoked the nation to commit itself to ‘panch pran’ – five resolutions in the ‘Amrit Kaal’ to pave the path of a great India. In the first resolution, he made a call to make India a developed nation by 2047, the year when the country will celebrate 100 years of its independence. He has rightly emphasised that for a nation to become developed, it should shun reliance on others, come out of the colonial mindset and explore its own intellectual capabilities and intrinsic strength. In his second resolution, he has invoked the people to remove any trace of the colonial mindset while pursuing the goal of developed India. As for the third resolution, he has emphasised the rich heritage of India and asked the countrymen to take pride in the nation’s roots and the great legacy of the country. While calling on everyone to contribute to the unity of the country as the fourth resolution, he also focussed on the sense of duty among citizens as the fifth resolution. He gave the mantra of ‘Nation First’ for ensuring unity, saying any step taken with this mantra in mind will lead the nation in one direction, in the direction of unity. At the same time, he emphasised the importance of living a disciplined life and being committed to duty as two principles that can propel the nation to greater heights. In an extremely important call, he urged the nation to pledge to end all forms of humiliation towards women, emphasising that no nation can achieve its goals unless it takes pride in the abilities of women. To th mantra of ‘Jai Javan, Jai Kisan’ to which Atalji had added ‘Jai Vigyan’, the PM has added ‘Jai Anusandhan’ highlighting importance of innovation and research in the journey ahead.

While highlighting the expectations of an aspirational society as part of ‘Tri-Shakti’, he said he considered it an asset in the onward march of the nation along with the awakening of the collective consciousness of the nation and the way the world is looking at India for the solution to its problems. The Prime Minister also called for a decisive fight against corruption and nepotism, which are proving to be roadblocks in the onward journey of the nation. While India has the experience of 75 years of glorious journey, there are dreams which are yet to be fulfilled. The nation’s strength can be optimally utilised in the ‘Amrit Kaal’ to become a developed nation committed to the welfare of all humanity. By emphasising ‘Sabka Prayas’ along with ‘Sabka Sath, Sabka Vikas, Sabka Vishwas’, he called upon the people to devote every moment of life for making a developed and self-reliant India in the coming 25 years of ‘Amrit Kaal’.
shivshaktibakshi@kamalsandesh.org