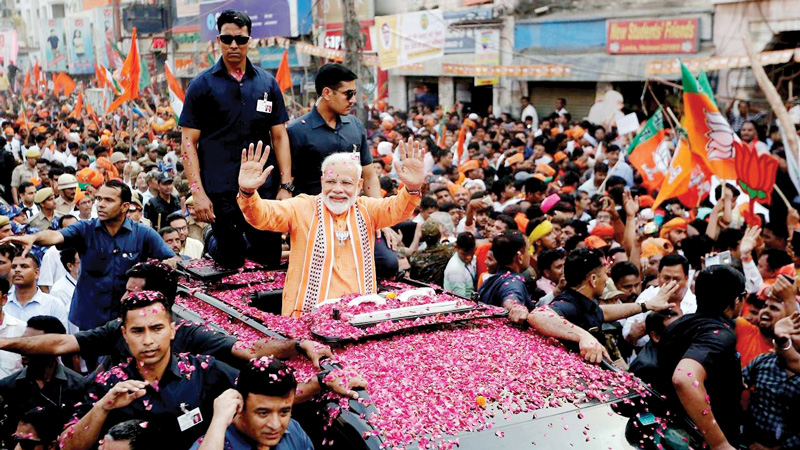 Prime Minister Shri Narendra Modi held a massive roadshow in his Lok Sabha constituency of Varanasi, Uttar Pradesh on 25 April, 2019 just a day before filing his nomination papers for the Lok Sabha elections. The Prime Minister received a roaring welcome by a sea of supporters who thronged the streets of Varanasi hours before the mega roadshow began. Soon after arriving in Varanasi, Shri Narendra Modi paid floral tributes to Pandit Madan Mohan Malaviya at the gate of the Banaras Hindu University (BHU) and started his mega road show.

The massive roadshow which covered a stretch of over six kilometers, started from Lanka and passed through Assi, Bhadini and Sonarpura before culminating at the iconic Dashashwamedh Ghat, where the PM took part in the Ganga Arti.

People from all walks of life joined PM Shri Modi as the roadshow progressed through the heart of Kashi and Lakhs of people welcomed him with tremendous enthusiasm.

Lakhs of people gathered on the streets, on roofs of buildings to catch a glimpse of the Prime Minister. Many were seen on rooftops waving at the PM and other BJP leaders. “Every rooftop, every road, every market was crammed with people. In 2014, when he came to file his nomination, the crowd was estimated at 500,000. Today it was 600,000,” the Varanasi police said.

Shri Narendra Modi also thanked the people of Varanasi for their support after his mega roadshow in the city which saw Varanasi turn into a sea of saffron. Addressing the gathering after the roadshow, the PM said that he was indebted to the people of the holy city.

Talking about the developments carried out by the BJP government in Varanasi, the PM said that when he took oath on May 17, 2014, he wondered whether he will be able to live up to the expectations of the people of Kashi and said that with the collective effort of everyone and with the blessings of Baba Bholenath, this holy city witnessed unprecedented development and the entire country is aware of it.

“Whatever happens, I will always think about the people of this country. I have lived by only one mantra all my life which is India First and I will make sure that I live up to the expectations of the people of Varanasi,” the PM said.

The PM further said that Varanasi not only made him an MP but also blessed him to become the PM of India.

Talking tough on terror the PM said that fighting terrorism will remain his top priority and added that the holy city gave him the power to give a fitting reply to the terrorists in their own language. “This new India will not tolerate terrorism but will give terrorists a fitting reply in their own language. 40 of our soldiers were martyred in Pulwama by the terrorists. After the attack, 42 militants have been slain in that very region. This is our style of working,” he said.

Before filing his nomination papers on 26 April, 2019 PM Shri Narendra Modi visited the Baba Kaal Bhairav temple and offered prayers there. The PM sought blessings from the deity who is also known as the Kotwal of Kashi or the guard of Varanasi.

While on his way to the collector’s office, Shri Narendra Modi was showered with rose petals by the public.

Earlier in the day, PM Shri Modi said, “Whether I win or not is not important. It’s the democracy that should win. Forming the government is in people’s hands, running it is our duty.”

Shri Narendra Modi is seeking a second term in office from Varanasi, a parliamentary seat he handsomely won in 2014 by a massive margin of 3.37 lakh votes. BJP stormed to power in 2014 with the party winning 282 of the Lok Sabha’s 543 constituencies. The BJP won an absolute majority in 2014, reducing the then-ruling Congress to a miserly 44 seats.