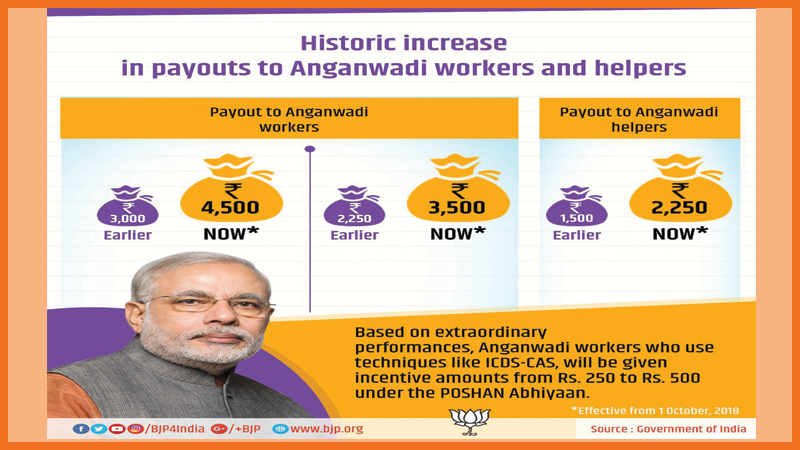 The Prime Minister, Shri Narendra Modi on September 11 announced a landmark increase in remuneration for ASHA and Anganwadi workers. The announcement which will be effective from next month was made during a video bridge interaction with lakhs of ASHA, Anganwadi and ANM workers.

Prime Minister also announced significant increase in the honorarium given to Anganwadi workers. Those receiving Rs. 3000 so far, would now receive Rs. 4500. Similarly those receiving Rs. 2200, would now get Rs. 3500. The honorarium for Anganwadi helpers has also been increased from Rs. 1500 to Rs. 2250. Prime Minister also announced that Anganwadi workers and helpers using techniques such as Common Application Software (ICDS-CAS), would get additional incentives. The incentives ranging from Rs. 250 to Rs. 500, would be based on performance.

The Prime Minister interacted with teams of three As – the ASHA worker, Anganwadi worker and ANM (Auxiliary Nurse Midwife) from across the country. He appreciated their efforts to work together, to use innovative means and technology, to improve the delivery of health and nutrition services and achieve the goal of the POSHAN Abhiyan – reduction of malnutrition in the country.

A group of about 90 ASHA representatives from across the country, called on Prime Minister Narendra Modi on September 20 to express their happiness, and thank him for the recent announcement of increase in incentives, and insurance cover.

The Prime Minister recalled his recent interaction with the ASHA and Anganwadi workers across the country, via video conference. He appreciated the experiences and personal accounts that had been shared by ASHA representatives that day, and said that these will surely prove inspirational for many.

Today, ASHA activists shared some more accounts of how they had been instrumental in saving lives of poor mothers and children through timely intervention.

The Prime Minister appreciated the skill and dedication of ASHA workers, and recalled that even Bill and Melinda Gates had praised the efforts of ASHAs towards eradication of diseases such as Kala Azar.

He encouraged them to devote their energies to work in coordination with other government agencies to improve the quality of life in their villages. He also explained how Government schemes and initiatives are all aimed at empowering the poor to fight poverty.

Union Minister for Health and Family Welfare Sh. J.P. Nadda was also present on the occasion.

Lauding the PM’s decision to hike the salary of Asha and Anganwadi workers BJP National President Shri Amit Shah said,“Modi government’s decision will not only motivate but also improve quality of life of Asha and anganwadi workers and their helpers who are the strongest grassroots linkage in the chain to provide health and nutrition facilities to women and children.”

Shri Shah said these are grassroot health workers whose efforts impact a wide cross-section of society, especially the poor and those living in rural areas. This increase will improving their quality of life and will also motivate them to perform their crucial roles even better, he said.

The BJP President said, “The honorarium of anganwadi and Asha workers has increased by 1½ times from the existing amount. This will boost their morale and help improve the delivery of services by the front line workers and help to achieve the goal of Poshan Abhiyan”.