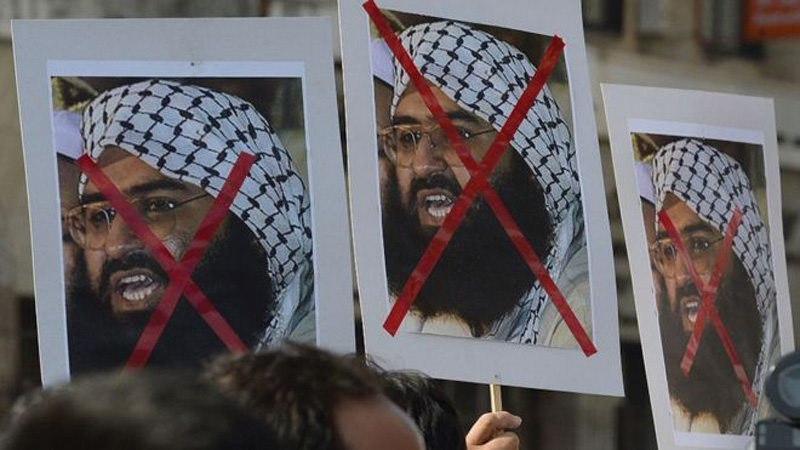 Chronology of the major events which led to the ban :


2009: India moves a proposal by itself to designate Azhar as a global terrorist, a listing that will subject him to global travel ban, asset freeze and arms embargo. China blocks the move.

2016: India again moves the proposal with the backing of the P3 – the United States, the United Kingdom and France in the UN’s 1267 Sanctions Committee to ban Azhar.

2017: The P3 nations move a similar proposal again. China, a veto-wielding permanent member of the Security Council, blocks the proposal from being adopted.

February 27, 2019: The US, the UK and France move a fresh proposal in the UN Security Council to designate Azhar as a global terrorist.

March 13, 2019: China puts the hold on the proposal scuttling yet another attempt to blacklist the JeM chief. The proposal was the fourth such bid at the UN in the last 10 years to list Azhar as a global terrorist.

March 28, 2019: The US, supported by France and the UK, directly moves a draft resolution in the UN Security Council to blacklist the Pakistan-based terror group’s chief.

April 3, 2019: China hits out at the US for threatening to use “all available resources” to designate the Pakistan-based JeM chief as a ‘global terrorist’, saying Washington’s move is complicating the issue and not conducive to peace and stability in South Asia.

April 30, 2019: China said “some progress” has been achieved on designating Azhar as a global terrorist by the UN and hopes that the vexed issue will be “properly resolved”.

May 1, 2019: The 1267 Sanctions Committee designates Azhar as a global terrorist after China lifts the hold on the proposal of the US, the UK and France.

The entire world saw recently how the terrorist Masood Azhar has been declared a global terrorist: Modi

Speaking central government’s success in designating Pakistan-based Masood Azhar as a ‘global terrorist’ at the UN, PM Shri Narendra Modi said, “The entire world saw recently how the terrorist responsible for the killings of hundreds of Indians, Masood Azhar has been declared a global terrorist by the UN. It is a great victory for India’s counter-terrorism efforts and shows that we have support from the whole world in this matter. However, the Congress leaders are alleging that Modi government did this deliberately to gain political mileage in the elections. I want to tell them that this habit of viewing everything from the angle of politics and elections has led the Congress to its present condition today where they have lost support from the people.”

BJP National President Shri Amit Shah said “That is why India needs a strong & decisive leader. Grateful to PM @narendramodi and his diplomatic efforts that led to the UN designating Masood Azhar as a global terrorist. It was long over due. This also reflects PM Modi’s commitment towards Zero Tolerance against terrorism.”