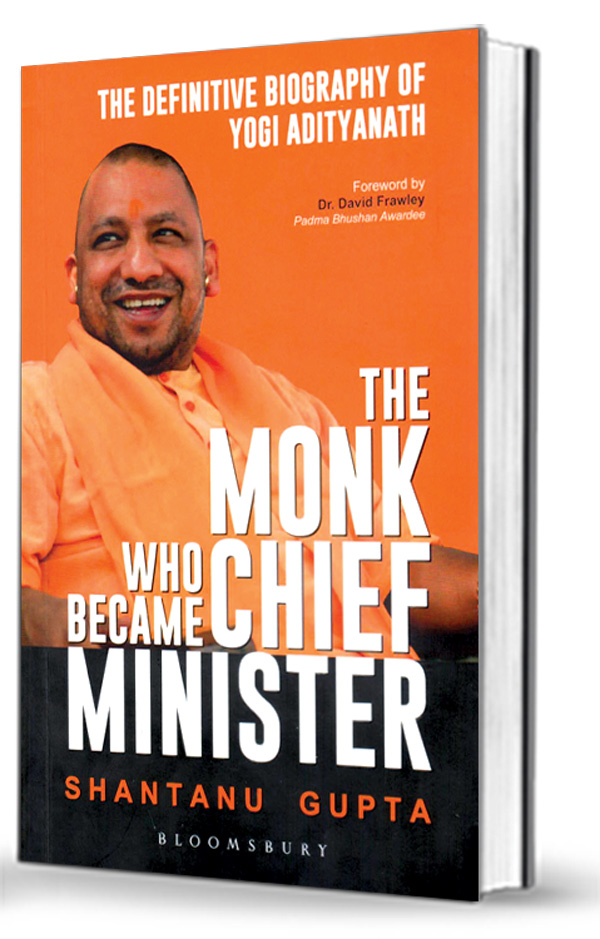 Aleading publishing house Bloomsbury has brought a book on one of India’s most popular Chief Ministers Yogi Adityanath, named ‘The Monk who Became Chief Minister’. Shantanu Gupta, communication advisor to Baba Ramdev and an alumnus of the Institute of Development Studies, University of Sussex , United Kingdom has authored the book. ‘The Monk who Became Chief Minister’ is a brief biography of Yogi Adityanath. A renowned American writer PadmaBhushan Awardee and founder of American Institute of Vedic Studies David Frawley has written the preface of this book.

The book briefly covers Yogi’s journey from a Mahant to Chief Minister. It is divided into four sections. The first section talks about BJP’s win in assembly elections and Yogi’s anointment on the throne of the Uttar Pradesh. The author also briefly analys the strategy on how the BJP grabbed 325 seats out of 403 seats, and secured a 42% of vote share. The section argues how Yogi ji was Prime Minister Shri Narendra Modi’s pick for CM post. It also covers the minutely his initial days in the office. Chief Minister Yogi Aditya Nath did not leave his previous style to connect the people. His connect with the masses through ‘Janta Darbar’ elucidates the exemplary way of solving people’s problems.

The second section of the book contains descriptions of Yogi Adityanath as a parliamentarian, whose performance was way ahead the national average. The author in this section alleges that the mainstream media never reported the multi-faceted intervention of MP Yogi Adityanath in parliament.The section includes electoral history of Gorakhpur Lok Sabha. Yogi Adityanath’s electoral politics in the Gorakhpur region succeeded to end the political culture of muscle power. Yogi Adityanath’s appointment as Chief Minister has drawn worldwide attention of media. In this section, a part is also devoted on the role of international media on Yogi. The author is critical about the ignorance of international media about India. The author writes, “On 12th July, New York Times’South Asia Bureau Chief Ellen Barry wrote an article on the rise of Yogi Adityanath,whose headline on twitter read, “Head of militant Hindu temple ascends India’s political ladder. It is not the first time when New York Times published an ignorant article about india but still everyone was left shell-shocked when it called Uttar Pradesh chief Minister a militant.”

The last section narrates the story of Adityanath as Ajay Bisht of Uttrakhand. After finishing schooling in Rishikesh Yogi Adityanath joins college in Kotdwar. The author narrates an incidents how Ajay Bisth chose ABVP over SFI.
Overall, this book provides an interesting read based on actual incidents of Yogi Adityanath’s life, and is a must read for anyone interested to know about BJP’s success mantra in having an ascetic being crowned the leader of the masses.