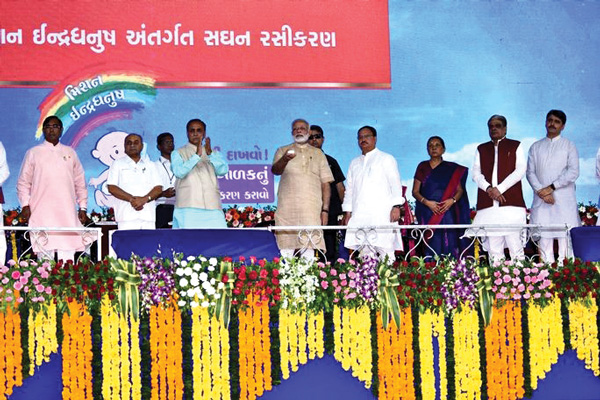 “Let no child suffer from any vaccine-preventable disease”. This was stated by Prime Minister Shri Narendra Modi as he launched the Intensified Mission Indradhanush (IMI) at Vadnagar in Gujarat on October 8. Through this programme, Government of India aims to reach each and every child under two years of age and all those pregnant women who have been left uncovered under the routine immunisation programme. The special drive will focus on improving immunization coverage in select districts and cities to ensure full immunization to more than 90% by December 2018. The achievement of full immunisation under Mission Indradhanush to at least 90% coverage was to be achieved by 2020 earlier. With the launch of IMI, achievement of the target has now been advanced.

Speaking on the occasion to a packed audience, Shri Narendra Modi stated that the Government has made immunization a people’s and a social movement. The Prime Minister made a strong appeal to all those present in the audience and the country men and women to own the programme in order to make all efforts to reduce maternal and child mortality.
The Prime Minister also highlighted other achievements of the Government including the new National Health Policy 2017 which has been unveiled after fifteen years, and is people-centered. “Regulating of the prices of stents has immensely helped a large section of the country by reducing the cost of healthcare on the middle income group and poor families”, Shri Narendra Modi added. The Prime Minister expressed satisfaction at the success of the Pradhan Mantri Matritva Suraksha Abhiyaan where private doctors have volunteered to provide free ANC services to pregnant women on the 9th of every month along with government doctors.

Speaking at the function, Shri J P Nadda, Union Minister of Health and Family Welfare, said that the unwavering support of the Prime Minister has always been a source of great inspiration. He added that improving the health status of the children of the country is amongst the top priorities of the Government. Shri Nadda informed that the four phases of Mission Indradhanush have reached to more than 2.53 crore children and 68 lakh pregnant women with life-saving vaccines including 5.21 lakh children & 1.27 lakh pregnant women in Gujarat. Through this mission, we have accelerated our progress towards our target of 90% full immunization coverage, he stated. Earlier the increase in full immunization coverage was 1% per year which has increased to 6.7% per year through the first two phases of ‘Mission Indradhanush’.

With a sharpened focus on high priority districts and urban areas, under IMI, four consecutive immunization rounds will be conducted for 7 days in 173 districts — 121 districts and 17 cities in 16 states and 52 districts in 8 north eastern states — every month between October 2017 and January 2018. Intensified Mission Indradhanush will cover low performing areas in the selected districts and urban areas. These areas have been selected through triangulation of data available under national surveys, Health Management Information System data and World Health Organization concurrent monitoring data. Special attention will be given to unserved/low coverage pockets in sub-centre and urban slums with migratory population. The focus is also on the urban settlements and cities identified under National Urban Health Mission (NUHM).

Intensified Mission Indradhanush will have inter-ministerial and inter-departmental coordination, action-based review mechanism and intensified monitoring and accountability framework for effective implementation of targeted rapid interventions to improve the routine immunization coverage. IMI is supported by 11 other ministries and departments, such as Ministry of Women and Child Development, Panchayati Raj, Ministry of Urban Development, Ministry of Youth Affairs among others. The convergence of ground level workers of various departments like ASHA, ANMs, Anganwadi workers, Zila preraks under National Urban Livelihood Mission (NULM), self-help groups will be ensured for better coordination and effective implementation of the programme.

Intensified Mission Indradhanush would be closely monitored at the district, state and central level at regular intervals. Further, it would be reviewed by the Cabinet Secretary at the National level and will continue to be monitored at the highest level under a special initiative ‘Proactive Governance and Timely Implementation (PRAGATI)’.

This Intensified Mission is driven based on the information received from gap assessment, supervision through government, concurrent monitoring by partners, and end-line surveys. Under IMI, special strategies are devised for rigorous monitoring of the programme. States and districts have developed coverage improvement plans based on gap self-assessment. These plans are reviewed from state to central level with an aim to reach 90% coverage by December 2018.

An appreciation and awards mechanism is also conceived to recognize the districts reaching more than 90% coverage. The criteria includes best practices and media management during crisis. To acknowledge the contribution of the partners/Civil Society Organization (CSOs) and others, Certificate of Appreciation will be given.

At the function, the Prime Minister also dedicated the GMERS Medical College, Vadnagar to the nation and launched the Innovative Mobile Phone Technology for Community Health Operation (ImTeCHO) for improving coverage of community based maternal, neonatal and infant health services to reduce neonatal and infant mortality in Gujarat by empowering health staff through use of innovative mobile phone application. GMERS Medical College serves nearly 400-500 outdoor patients and 80-100 indoor patients daily.