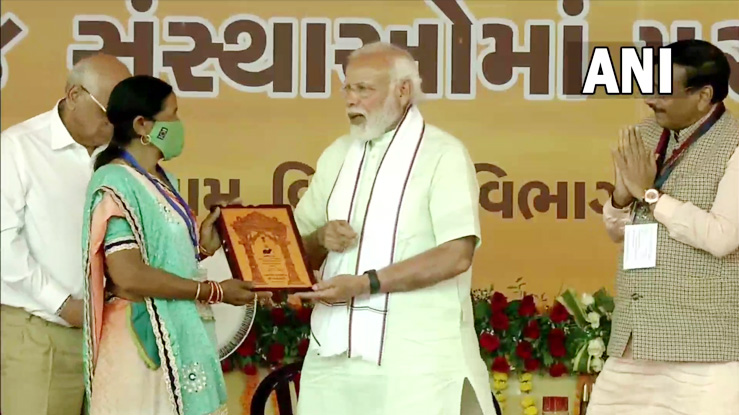 The Prime Minister, Shri Narendra Modi addressed Gujarat Panchayat Mahasammelan in Ahmedabad on March 11 during his two days Pravas in state. The event was attended by panchayati raj representatives from all over the State.

The Prime Minister noted that Gujarat is land of Bapu and Sardar Vallabhbhai Patel. He said “Bapu always talked about rural development, self-reliant villages. Today, as we are marking Amrit Mahotsav, we must fulfil Bapu’s dream of ‘Grameen Vikas’”
The Prime Minister appreciated the role of Gujarat’s panchayat and villages for a disciplined and good management of the pandemic. He also noted that in Gujarat, number of women panchayat representative is more than the male representatives. He said that nothing symbolizes the strength of Indian democracy more than fact of more than one and half lakh panchayat representatives deliberating together.

The Prime Minister gave guidance to the panchayat members on how to ensure there village development with small but very basic initiatives. He advised to celebrate the birthday or the foundation day of their school. By way of it, he advised to clean campus and classes of the school and to take up good activities for the school. Saying that country is celebrating Azadi Ka Amrut Mahotsav till August ‘23, he suggested to take out 75 Prabhatferi (morning processions) in the village during this period. Moving forward, he advised to hold 75 programs during this period in which entire village populace should get together and think about the holistic development of the village. Adding one more suggestion he said that the villages should create a small forest planting 75 trees in commemoration of 75 years of Indian independence. There should be at least 75 farmers in each village who adopt natural way of farming. He said that the mother earth should get rid of the poison of fertilizers and chemicals. The Prime Minister added that 75 farm ponds should be made to conserve the rain water so that underground water level rises and it helps in summer days.

He also advised to ensure that not a single cattle is left unvaccinated to save them from the foot & mouth disease. The Prime Minister appealed them to adopt LED bulbs for saving electricity in Panchayat house and in streets as well. He also said that retired Government employees should be mobilized in the village and the village birthday should be celebrated in which people gather and discuss about the welfare of the people. He advised to the panchayat members that one member should visit the local school at least once in a day for 15 minutes at least so that the village school will be under strict vigil and maintain good standards of education and cleanliness. He appealed to the panchayat members to awaken the people to take maximum benefit of Common Service Centres (CSCs) which are actually the highways to government.

Airport and took part in a roadshow. Riding in an open jeep decorated with floral garlands, PM Shri Modi waved to the large numbers of Karyakarta’s and admirers who gathered by the roadside in huge number for roadshow. BJP’s state headquarters in Gandhinagar is around 10 km from the airport. At upon receiving the warm welcome from Karyakarta’s and people of Gujarat PM Shri Modi said, I am humbled by the people’s affection. This support and enthusiasm inspires us to work even harder in service of our citizens. 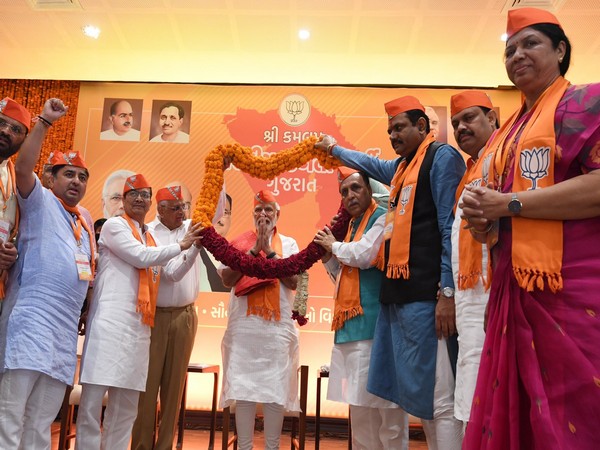 Later in the evening PM Modi met BJP Karyakarta’s and leaders at state BJP HQ. He explained the karyakarta’s that how the Party organisation can serve the people even more effectively and contribute towards national development with them.

PM dedicates building of Rashtriya Raksha University to the nation

On the second day of his pravas, Prime Minister Shri Narendra Modi dedicated a building of Rashtriya Raksha University to the nation and delivered its first Convocation address at Ahmedabad. Union Minister for Home Affairs and Minister of Cooperation, Shri Amit Shah, Governor of Gujarat Acharya Devvrat and Chief Minister of Gujarat Shri Bhupendrabhai Patel were among those present on the occasion.

At the outset, the Prime Minister paid tribute to Mahatma Gandhi and those who participated in the Dandi March. The great march was started on this day. “The movement under the leadership of Gandhiji against the injustice of the British had made the British government realize the collective power of us Indians”, the Prime Minister said. 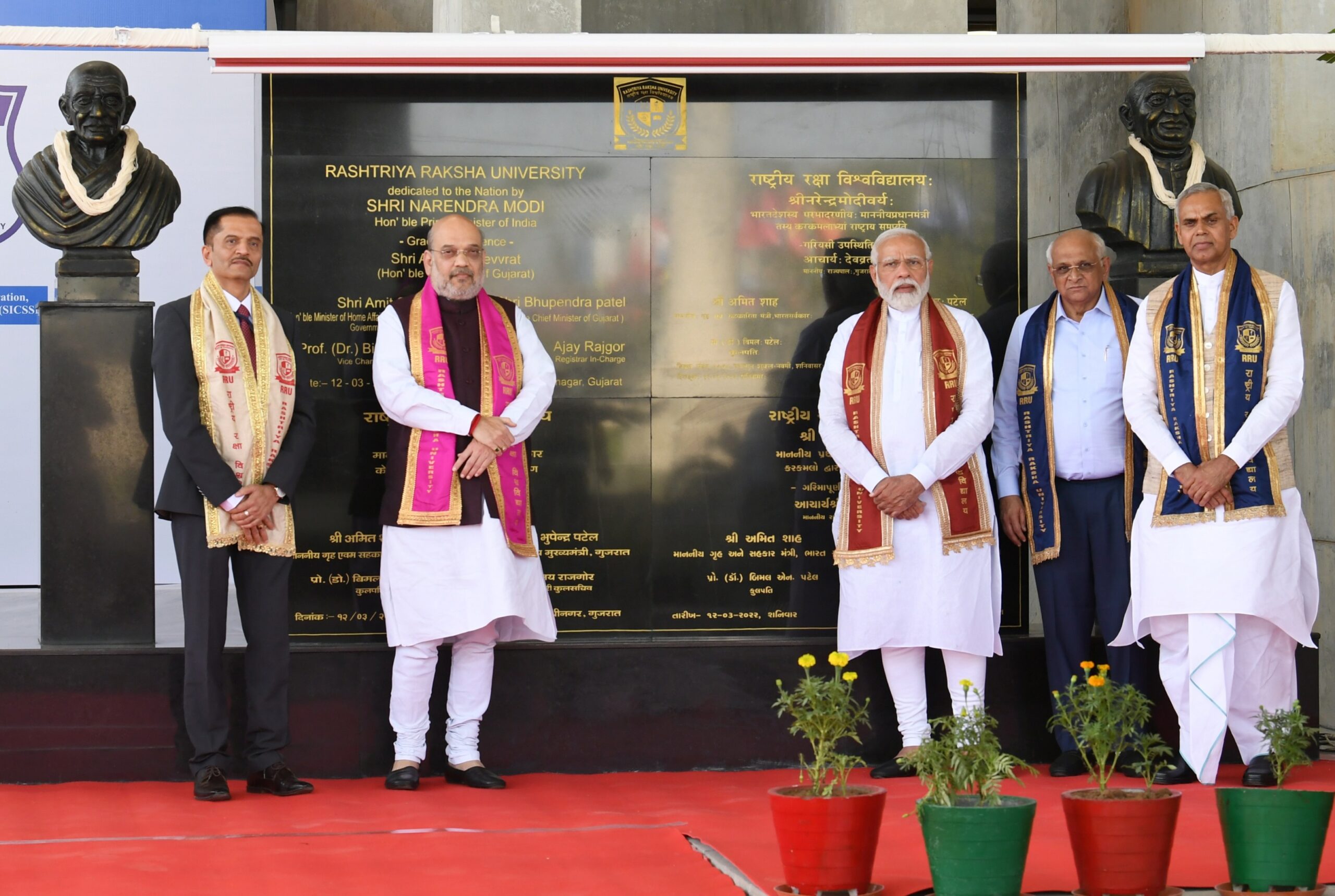 He stressed the need to change the image of police and security personnel. Depiction of police in the popular culture has not helped in this regard, either. He noted the humane work by the police personnel during the pandemic. “Post-independence, there was a need of reforms in the country’s security apparatus. A perception was developed that we have to be careful of the uniformed personnel. But it has transformed now. When people see uniformed personnel now, they get the assurance of help”, he said.

The Prime Minister also noted shrinking of the support network of joint family for police personnel in dealing with the stress of the job. He emphasized need for experts to deal with stress and relaxation including yoga experts in the forces. “Stress-free training activities is need of the hour for strengthening the country’s security apparatus”, he added.

He underlined the importance of technology in the security and policing work. He said if criminals are using technology, technology can be harnessed to nab them also. He said this emphasis on technology would also enable even the divyang people to contribute in the field.

He urged the students that they should always keep the values of humanity as integral to their uniform and there should never be dearth of service spirit in their efforts. He noted with satisfaction the growing number of girls and women in security field. “We are seeing greater participation of women in defence sector. Be it Science, Shiksha or Suraksha, women are leading from the front”, he said.
Rashtriya Raksha University (RRU) was set up to meet the need for high quality trained manpower in various wings of policing, criminal justice and correctional administration.