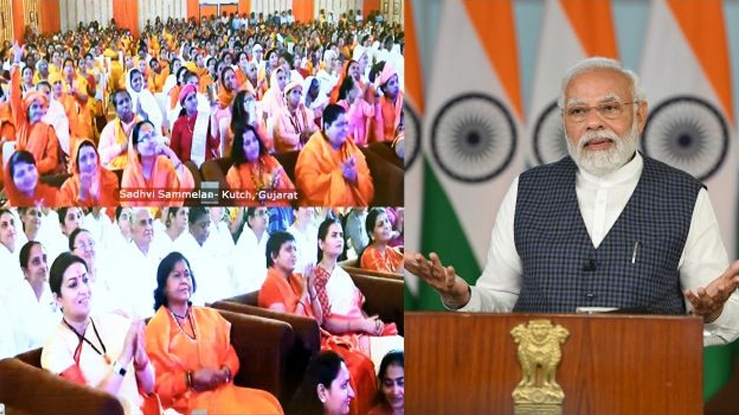 Prime Minister Shri Narendra Modi addressed a seminar on International Women’s Day in Kutch through video conference on March 8. Addressing the gathering, the Prime Minister greeted the gathering on the International Women’s Day. He recognized the special place of the land of Kutch as a symbol of Nari Shakti for centuries as Maa Ashapura is present here in the form of Matrushakti. “The women here have taught the entire society to live with harsh natural challenges, taught to fight and taught to win”, he said. He also praised the role of women of the Kuch in their quest for water preservation. As the event was being held in a border village, the Prime Minister recalled the contribution of women of the area in the 1971 war.

The Prime Minister said women are the reflection of ethics, loyalty, decisiveness and leadership. “That is why our Vedas and tradition have given a call that women should be able, capable to give direction to the nation”, he said.

The Prime Minister said from Mirabai in the North to Sant Akka Mahadevi in the South, the divine women of India have given voice to reform and change in society, from Bhakti movement to Gyan Darshan. Similarly, Kutch and the land of Gujarat has witnessed divine women like Sati Toral, Ganga Sati, Sati Loyan, Rambai and Lirbai. Nari Consciousness symbolised by innumerable goddesses of the country had kept the flame of freedom struggle burning, he said.

The Prime Minister said in a nation which considers this earth as mother, the progress of women there always gives strength to the empowerment of the nation. “Today the priority of the country is to improve the lives of women. Today the priority of the country lies in the full participation of women in India’s development journey”, he added. He mentioned construction of 11 crore toilets, 9 crore Ujwala gas connections, 23 crore Jan Dhan accounts as steps that brought dignity and ease of living for women.

The Prime Minister said the government is also giving them financial help so that women can move forward, fulfil their dreams, and start work of their own. “More than 80 percent of the loans under ‘Standup India’ are in the name of women. About 70 percent loans have been given to our sisters and daughters under Mudra Yojana” he said. SImilarly, most of the 2 crore houses made under PMAY are in the name of women. All this has increased the participation of women in financial decision making.

The Prime Minister informed that the Government has increased maternity leave from 12 weeks to 26 weeks. He added that the laws for the safety of women in the workplace have been made more strict. Today, the country is promoting greater roles for girls in the armed forces, the admission of girls has started in Sainik Schools.
The Prime Minister urged the people to help in the campaign against malnutrition going on in the country. He also stressed the role of women in Beti Bachao Beti Padhao. He also asked for their participation in the ‘Kanya Shiksha Pravesh Utsav Abhiyan’.

‘Vocal for Local’ has become a big topic related to the economy, but it has a lot to do with women empowerment, the Prime Minister said. The power of most local products is in the hands of women, he added.