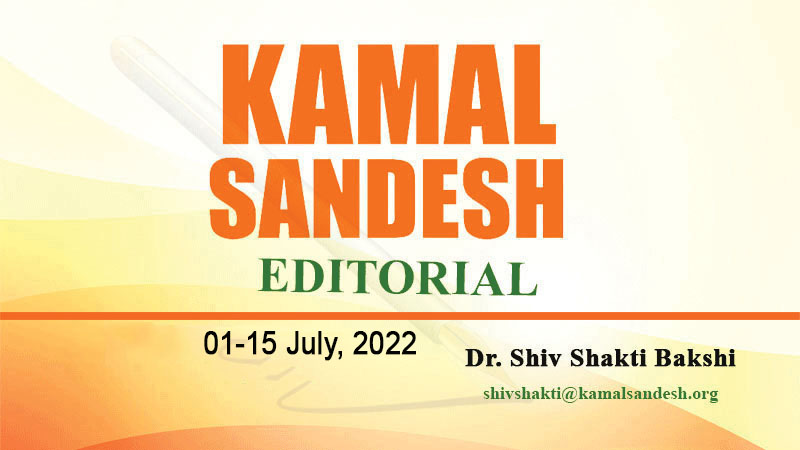 The 8th ‘International Day of Yoga’ was celebrated on June 21st, 2022, with full fervour and enthusiasm across the world. Yoga today has become part of the lives of millions of people around the globe who have adopted it in pursuance of a healthy and happy life. During the COVID-19 pandemic, when people were in an extremely difficult situation, yoga provided much-needed solace to the beleaguered humanity. In the trying times of the COVID-19 pandemic, India’s traditional knowledge of Ayurveda and Yoga not only introduced to the world the concept of preventive health, wellness, and healthy lifestyle but also the notion of mental and spiritual health. It is to be noted that it was the initiative of Prime Minister Shri Narendra Modi in the UN having the overwhelming support of 177 countries that 21st June was declared as ‘International Yoga Day’ in December, 2014. The first ‘International Yoga Day’ was observed on June 21st, 2015, while this year the eighth ‘International Yoga Day’ was celebrated. Prime Minister Shri Narendra Modi has rightly said that yoga today has not only become a part of our lives but has become a way of life.

The announcement of the candidature of Smt. Droupadi Murmu for the post of India’s President as an NDA nominee by BJP National President Shri Jagat Prakash Nadda has been widely welcomed all over the country. She has been serving the nation by adorning various positions in public life while dedicating herself to the poor and deprived sections of society. In her political journey spanning over decades, she has held many organisational positions while getting elected as an MLA in the Odisha assembly and serving the people of the state as a minister in Odisha government also. While she was honoured with the ‘Nilkantha Award’ for being the best MLA in 2007, as the first woman governor of Jharkhand, she made her mark as one of the most outstanding governors in the country. As she overcame various hardships in her early life while bearing the pangs of poverty, she symbolises the spirit of struggle, indomitable courage, and the victory of an indefatigable approach to life. On her election she is going to be the first tribal and the second woman to adorn the post of president in the country. While hailing her candidature, the Prime Minister has rightly said that her rich administrative experience, deep understanding of policy matters and compassionate nature will greatly benefit the nation. The BJP National President has said that her contributions to our nation are immense and she possesses a lot of expertise in different areas, which will be of great benefit to our country.

The announcement of the candidature of Smt. Droupadi Murmu for the post of India’s President as an NDA nominee by BJP National President Shri Jagat Prakash Nadda has been widely welcomed all over the country

The Modi government has, while opening new vistas of opportunities for the youth, women, poor, farmers, labourers and deprived sections of the country, shown immense commitment to continuous reforms in a bid to transform the system. ‘Agnipath’ is one such scheme which is set to transform the armed forces, giving new dynamism and energy while opening a huge area of opportunities for the youth of the country. The ‘Agniveers’ trained by the forces will contribute to various sectors in the country after completion of their tenure of four years, while up to 25% will be retained in the forces, making it a extremely professional and highly competent force in the world. It is highly unfortunate that the opposition has tried to play politics on the issue by spreading misinformation among the youth in an attempt to sabotage this long awaited reform in the forces. As the youth across the country have stood firm with ‘Agnipath’, expressing their faith in the transformative agenda of the government, the announcement of filling 10 lac vacancies in various government departments in mission mode by Prime Minister Shri Narendra Modi has further opened new doors of opportunities for the youth across the country. As the New India is taking shape, the nation is marching ahead with new confidence and trust.