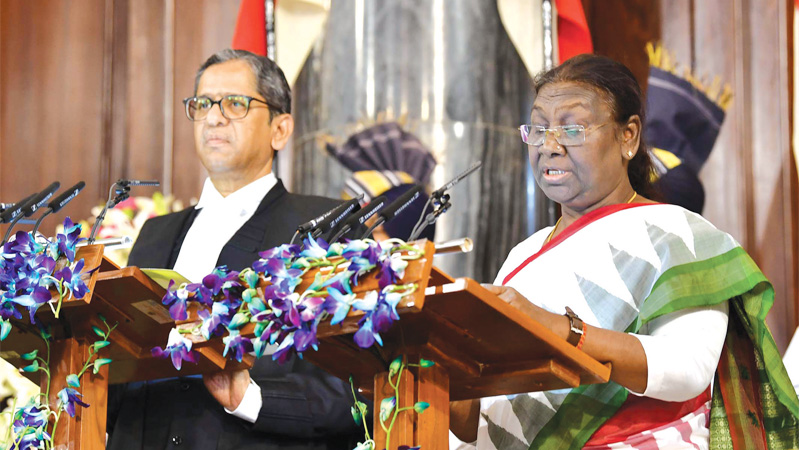 Scripting an exceptional history in the democratic polity of India, the NDA’s presidential candidate Smt. Droupadi Murmu on 21 July emerged triumphant with a wide margin in the presidential election and took oath as the 15th President of Democratic Republic of India on 25th July, 2022. Chief Justice of India Shri NV Ramana administered to her the oath of office in a Swearing-in Ceremony held in the Central Hall of Parliament in New Delhi.

On the day of result, making an official announcement, the election Returning Officer declared Smt. Murmu as the winner with 64.03 per cent votes; while her opponent Shri Yashwant Sinha got 36 per cent of the valid votes polled. Smt. Droupadi Murmu bagged votes from a total of 2824 electors, including 540 MPs, while her opponent got votes of 1,877 electors including 208 MPs in the election. Among states Smt. Murmu got the maximum votes from Uttar Pradesh, Maharashtra and Andhra Pradesh and around 17 MPs from opposition parties have cross-voted in her support.

The NDA’s brilliant choice of President not only put the Opposition on the back-foot, but also sent a strong message of inclusivity and democratic values to the global community. It’s also a heart-warming instance of how, a vibrant democracy can bring someone from the absolute bottom of the social pyramid to its peak. For the Opposition, the presidential election is yet another epic fail. It could neither unite behind its candidate, nor pitch the battle as an ideological one.

After the victory, Smt. Draupadi Murmu in her message said, “Elated by all of the support from my all political colleagues, Ministers, MP’s and MLA’s from all around India for choosing me to serve as the 15th President in the world’s largest democratic country Mother India. I extend my heartiest gratitude to all my brothers and sisters throughout India who have supported me to reach at the Highest Commandant of Indian Army. I am devoted to work for the people of my great motherland India.
When I was Nominated as NDA’S presidential candidate from that day I took oath in my mind that if I become President, first of all I will work for more development of my tribal and Adivasi brothers and sisters of whole of India and Odisha. Now that time has come, I will keep my promise.

I bow my head towards Mahaprabhu Shree Jagannath for the blessings and everything I achieved till date. I thank every citizen of mother India and to all of you, I cannot express my feeling right now!”

Murmu Emerged As A Ray Of Hope For Our Citizens: PM Modi

Congratulating the President-elect Smt. Droupadi Murmu, Prime Minister Shri Narendra Modi said, “She has emerged as a ray of hope for our citizens, especially the poor, marginalized and the downtrodden.

“India scripts history. At a time when 1.3 billion Indians are marking ‘Azadi Ka Amrit Mahotsav’, a daughter of India hailing from a tribal community born in a remote part of eastern India has been elected our President! Congratulations to Smt. Droupadi Murmu Ji on this feat”, he said. 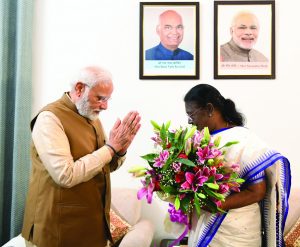 Smt. Droupadi Murmu Ji has been an outstanding MLA and Minister. She had an excellent tenure as Jharkhand Governor. I am certain she will be an outstanding President who will lead from the front and strengthen India’s development journey.
Smt. Droupadi Murmu Ji’s life, her early struggles, her rich service and her exemplary success motivates each and every Indian. She has emerged as a ray of hope for our citizens, especially the poor, marginalised and the downtrodden”.
With the oath as 15th President of India, Smt. Murmu has many firsts to her credit. She is not only the first tribal President at the Rashtrapati Bhavan, but, at the age of 64, Smt. Murmu will also be the youngest and India’s first President to be born after Independence.

She was also the first woman to have been appointed as the Jharkhand Governor in 2015. With that post, Smt. Droupadi Murmu also became the first tribal woman from her home state of Odisha to become a governor. She is a seasoned tribal leader from the Santal ethnic group. The Santals form the largest tribe in Jharkhand and a major tribe in states of Odisha, Assam, Tripura, Bihar, Chhattisgarh and West Bengal.

JOURNEY FROM A SMALL TRIBAL VILLAGE IN ODISHA TO RASHTRAPATI BHAVAN

Born on June 20, 1958, in Baidaposi village of the tribal dominated Mayurbhanj district in Odisha Smt. Droupadi Murmu began her career as a government servant from 1979 to 1983 in the position of a junior assistant in the Odisha government’s irrigation and power department. She has also taught without any salary at the Shri Aurobindo Integral Education Centre in Rairangpur, Odisha. 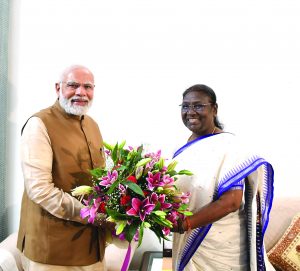 Coming from a humble background, Smt. Murmu rose through political ranks battling poverty and personal tragedies in one of the most remote and underdeveloped districts of the country. But her zeal to serve society triumphed. She began her political career in 1997 as a councilor and vice-chairperson of the Rairangpur civic body. In the same year, she was appointed the vice-president of Odisha BJP ST morcha. In 2000, she became the MLA of Rairangpur when the BJP and Biju Janata Dal formed a coalition government. She was the minister of state (independent charge) for Odisha’s department of Transport and Commerce from 2000 to 2004, and also assumed charge of the state’s Animal Husbandry department from 2002 to 2004, and the Fisheries department in 2002. 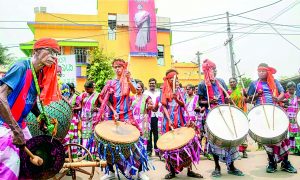 WITH ‘ABHINANDAN YATRAs’ BJP CELEBRATES ACROSS THE NATION

BJP began celebrations across the country as soon as it was officially announced that Smt. Droupadi Murmu had won more than 50% of the total votes. In Delhi, as Smt. Murmu too an invincible lead, BJP National President Shri JP Nadda reached the party office with the presidential Election Convener and Union Minister Shri Gajendra Singh Shekhawat, Co-conveners & BJP National General Secretaries Shri Vinod Tawde and Shri CT Ravi and Union Minister Shri Dharmendra Pradhan. All seven Delhi BJP MPs too were present in the office. 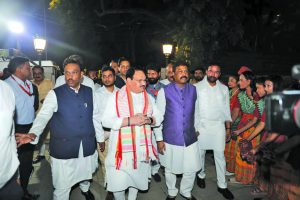 Congratulating Smt. Droupadi Murmu, BJP National President Shri JP Nadda said for a woman from tribal background to reach the post of President is a golden moment for the entire country and expressed confidence that her competence and experience in administrative and social works will benefit the country immensely.
Later, Shri JP Nadda accompanied Prime Minister Shri Narendra Modi to Smt. Murmu’s residence where they congratulated her on being elected as the new President.

In Karnataka, BJP office bearers and workers gathered at the state BJP office in Bengaluru to celebrate Smt. Murmu’s victory. 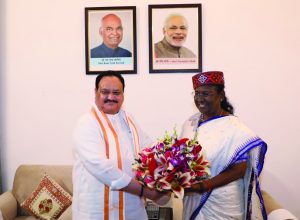 Celebrations were also held nationwide, particularly in tribal areas across the states, led by senior leaders of BJP and local BJP MLAs.

Reaching this office is not my personal achievement: Smt. Droupadi Murmu

Addressing the nation for the first time after being Sworn-In as the 15th President of India, Smt. Droupadi Murmu stated that her achievement belonged to every poor in India and was a reflection of the capabilities of crores of women.
She said, “It is a coincidence that my political career started when the country was celebrating its 50th year of Independence. And today, in the 75th year of Independence, I have been handed this responsibility. I am honoured to take on this responsibility at a historic time when India is gearing up to achieve the vision of the next 25 years”.
• I express my heartfelt gratitude to all the MPs and all the members of the Legislative Assemblies for being elected to the highest constitutional post of India. Your vote is an expression of the faith of crores of citizens of the country.
• I am the first President of the country who was born in Independent India. We will have to speed up our efforts to meet the expectations that our freedom fighters had with the citizens of Independent India.
• Reaching the Presidential post is not my personal achievement, it is the achievement of every poor in India. My election is evidence that the poor in India can not just dream but also fulfil those dreams.
• It is the power of our democracy that a daughter born in a poor house, a daughter born in a remote tribal area, can reach the highest constitutional post of India.
• It is satisfying to me that the people who were devoid of development for years — the poor, Dalits, backward, and the tribals — can find representation through me. My election has the blessings of the poor of the country and reflects the dreams and capabilities of crores of women and daughters of the country.
• I assure all the countrymen, especially the youth and women of India, that while working in this position, their interests will be paramount to me.
• In 75 years as a parliamentary democracy, India has carried forward the resolve of progress through participation and consensus.

1958– Hon’ble President Smt. Droupadi Murmu was born to a Santali family on June 20, 1958 in the Baidaposi village near Rairangpur in Mayurbhanj District of Odisha. Her name given by her family was Puti Tudu. She was renamed by her school teacher to Droupadi. 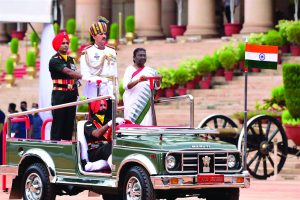 1979- Started working as a junior assistant in the irrigation department of Odisha government.

1997- She began her political career in 1997 as a councilor and vice-chairperson of the Rairangpur civic body in Odisha.

1997- She was appointed the vice-president of Odisha BJP ST Morcha.

2000- Became the MLA of Rairangpur when the BJP and Biju Janata Dal formed a coalition government.

2000- Appointed as the Minister of State (independent charge) department of Transport and Commerce, Government of Odisha.

2002- She was appointed as MoS for Fisheries and Animal Husbandry in Odisha government and remained in the office until 2004.

2004- Again elected as an MLA from the same Rairangpur constituency on a BJP ticket.

2007- She was honoured with Nilakantha Award for the best MLA in year 2007 by Legislative Assembly of Odisha.

2015- Smt. Draupadi Murmu was appointed the governor of Jharkhand. She was the first one to successfully complete the term of the Jharkhand Governor.