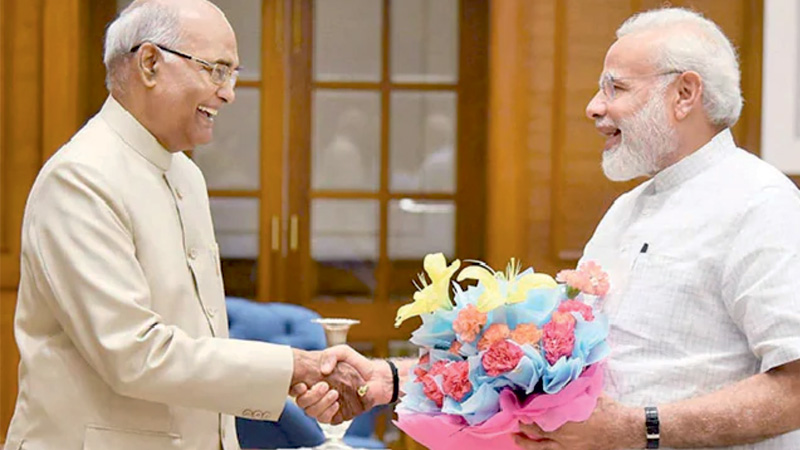 A day before Shri Ram Nath Kovind demitted the office of President of the country; he received a letter from Prime Minister Shri Narendra Modi who lauded the former President for having set “the highest standards of principles, probity, performance, sensitivity, and service during his tenure.”

The former President in his message thanked Prime Minister Shri Narendra Modi for his kind words. “This letter from Prime Minister @narendramodi has deeply touched me. I take his kind and heartfelt words as a reflection of the love and respect fellow citizens have showered on me. I am sincerely grateful to you all,” Shri Kovind tweeted.

Prime Minister Shri Modi in his letter to Shri Ram Nath Kovind, shared by the former President, said, “As your term draws to an end, I join the entire nation in saluting you and extending our deepest gratitude for your outstanding service as the President of our Republic and for a long and distinguished career in public life. You set the highest standards of principles, probity and performance, and of sensitivity and service.”

Prime Minister Shri Modi also lauded the journey of Shri Kovind from a small village in Uttar Pradesh to the Rashtrapati Bhavan. He further said that the former President upheld and reinforced the ideals of the Constitution and the vitality of democracy with sound judgment, great dignity, and extraordinary statesmanship.
As the Head of State at a time of unprecedented stress of the pandemic and a world caught in turbulence and conflict, you were a source of calmness, unity and reassurance at home, and a persuasive advocate of India’s values and interests abroad, he said.

He said that the former President was a steadfast and passionate champion of social transformation and inclusion, speaking for the poor, the historically excluded and oppressed, and the marginalized, with special attention to the status and role of women. As a Member of Parliament, you made a mark as an effective Parliamentarian who often raised issues pertaining to social welfare and education. Your tenure as Governor in Bihar was outstanding. You made unparalleled efforts to make the Raj Bhavan into a Lok Bhavan, which is accessible to the common people.
The Prime Minister also remembered their tour together to Paraunkh and said, “I have always been deeply touched by your humility, grace, and generosity. I will never forget our visit to Paraunkh a few weeks ago. I was particularly touched to see how you had donated your family residence to help others, especially those belonging to the poor and marginalized sections of society. It was equally heartening to see you retain the deep connection with your roots and the affection the people showered upon you,” PM Shri Modi said.

While concluding the letter, the Prime Minister said, “You have always been generous with your time and counsel to me over the past five years, and I will continue to turn to you for advice. It has been a real privilege to work with you, Rashtrapati ji, as your Prime Minister. I join fellow citizens in wishing you a long and healthy life ahead. Jai Hind!”

‘Our Country getting equipped to make 21st century, the century of India’

Outgoing President’s address to the nation

Outgoing President Shri Ram Nath Kovind addressed the nation on the eve of demitting office on 24 July 2022. During his farewell address, he remembered his predecessor Shri Pranab Mukherjee, India’s 13th President. Shri Kovind said that he has been conscious of being a successor to great icons of India of the likes of Dr. Rajendra Prasad, Dr. S Radhakrishnan, and renowned space scientist Dr. APJ Abdul Kalam. He said five years ago, when I first stepped foot inside the Rashtrapati Bhavan, Shri Pranab Mukherjee helped me to understand the role and duties by sharing his wise counsel. Secondly, whenever I was in doubt, I always turned to Gandhi’s teachings before taking a decision, Shri Kovind said.

During the address, Shri Kovind also shared that visiting his hometown in Uttar Pradesh’s Kanpur as a President and touching the feet of his teachers to seek their blessings, features among his “most memorable moments of life”.

Commending India’s journey as a country so far, Shri Ram Nath Kovind said that once the basic necessities of an individual such as housing, access to drinking water, and electricity are met, the next need is education.

He said, “I believe the National Education Policy will go a long way in making it possible for young Indians to connect with their heritage and also find their feet in the twenty-first century,” he noted, “I firmly believe that our country is getting equipped to make the 21st century, the century of India.”