Swearing in ceremony for new NDA Government in Bihar was held on November 16 at the Raj Bhawan. Shri Nitish Kumar took oath as Chief Minister for the seventh time and 4th consecutive term, with two Deputy Chief Ministers – Shri Tarkishore Prasad and Smt. Renu Devi from the BJP.
A total of 14 ministers including deputy chief ministers took oath for new cabinet, five of them from the JD(U), seven from the BJP and one from HAM(S) and VIP.

After NDA’s comfortable win in Bihar’s General Assembly Elections 2020 on 10the November, for which pollings were held in three phase, Bharatiya Janata Party (BJP) on November 15 unanimously elected Shri 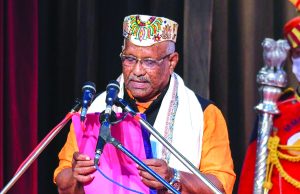 The 64-year-old Shri Tarkishore Prasad is a fourth-time MLA from Katihar. Coming from a humble background, Shri Prasad embarked on his political journey as an activist in Akhil Bharatiya Vidyarthi Parishad(ABVP). In 2005, he contested his first assembly election and won on a BJP ticket. Since then, he has been continuously elected in 2010,2015 and 2020. 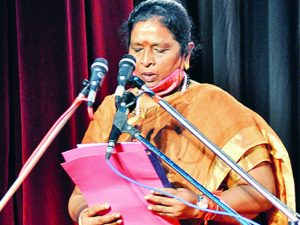 
Former BJP National Vice President Smt. Renu Devi became Bihar’s first female Deputy Chief Minister. Born and brought up in a middle-class family, she , influenced by her mother’s association with RSS, became active in Durga Vahini. Later, she joined the BJP Mahila Morcha in 1988. Next year, she was given the responsibility to head the wing in the Champaran region. She was further appointed as the Morcha’s Bihar State head for two terms, in 1993 and 1996. Four-time MLA Smt. Renu Devi served also as the Minister of Sports, Arts and Culture in the Bihar State Government between 2005 and 2009. She was also a National Vice-President of the BJP between 2014 and 2020.

@narendramodi
Congratulations to Nitish Kumar on taking oath as Bihar’s CM. I also congratulate all those who took oath as Ministers in Bihar Government. NDA family will work together for progress of Bihar. I assure all possible support from Centre for the welfare of Bihar.

@JPNadda
Congrats to Nitish Kumar Ji and all newly sworn-in ministers. I am sure that under the guidance of PM Shri Narendra Modi Ji, NDA will give pro-farmer, women, youth and development-oriented govt in the State. I assure people of Bihar that NDA is committed to fulfil their aspirations. Congratulations to Shri Tarkishore Prasad and Smt.Renu Devi on the swearing in as Deputy Chief Minister and congratulations to all those who took the oath as ministers.