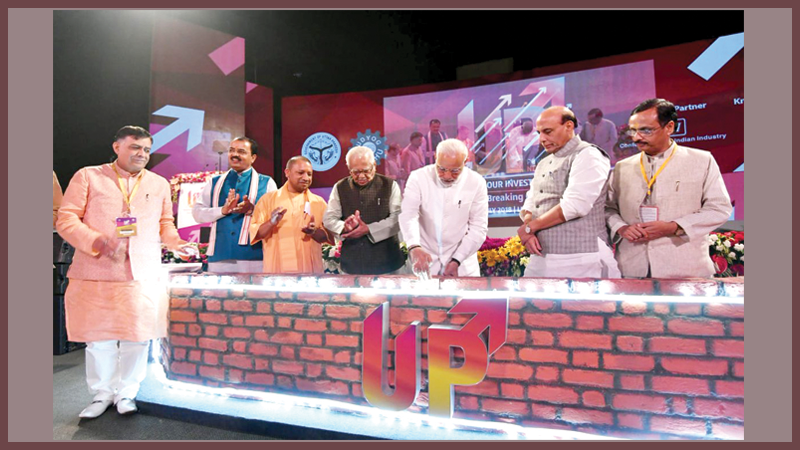 The Prime Minister, Shri Narendra Modi on July 29 visited Lucknow. He attended the groundbreaking ceremony of 81 projects in Uttar Pradesh, with a total investment of over 60,000 crore rupees.

These projects have materialised within a few months after the UP Investors Summit, which was organized in February 2018, in an effort to attract investments and promote industrialisation in the State.

The Prime Minister referred to the heavy rain in some parts of the country. He said the Union Government is monitoring the situation and working with the State Governments to provide assistance to all affected people.

He said that as a caring government, the objective is to ease the difficulty in the lives of people, and improve ease of living. He said that the gathering today is part of the effort to transform the State of Uttar Pradesh. He said the speed with which these projects have moved (from proposal to groundbreaking) within five months, is outstanding.

He congratulated the State Government for this achievement. He noted that these projects are not restricted to certain parts of the State, but will enable balanced development.

He praised the new work culture of the State Government. He said the changed investment climate in the State is bringing opportunities for employment, trade, good roads, adequate power supply, and a bright future. He said these projects would provide many new employment opportunities, and benefit various sections of society. He said that flagship programmes such as Digital India and Make in India, would receive a big boost through these projects.

The Prime Minister said that three lakh Common Service Centres spread across the rural areas today, are transforming lives in the villages, by enabling efficient and transparent service delivery.

The Prime Minister said that the Union Government is ending silos, and focusing on solutions and synchronization.
He said India has become the world’s second largest producer of mobile phones, and Uttar Pradesh is leading this manufacturing revolution.

The Prime Minister said that as infrastructure projects get completed, it will become even easier to do business in India, and expenditure incurred on logistics will reduce. He urged entrepreneurs and traders to move towards digital transactions.

The Prime Minister outlined the steps taken to improve electricity supply in the country. He said the country is moving from conventional energy to green energy, and Uttar Pradesh will become a hub of solar energy. He said India’s energy deficit has reduced from 4.2 percent in 2013-14, to less than one percent today.

The Prime Minister said that the roadmap for New India, is the fulfillment of the aspirations of its people, through Jan Bhagidaari (people’s participation).

The Prime Minister, Shri Narendra Modi also addressed on July 28 an event in Lucknow on “Transforming Urban Landscape,” which marked the third anniversary of three key Government initiatives related to Urban Development. These include :

The Prime Minister visited an exhibition on Flagship Missions of Urban Development. He interacted with 35 beneficiaries of PMAY (U) – one from each State/UT.

He received feedback from PMAY beneficiaries, via video link, from different cities of Uttar Pradesh.

He laid the Foundation Stone for various projects under Flagship Missions, in the State of Uttar Pradesh.

Addressing the gathering, the Prime Minister said that urban administrators present in the gathering, are representatives of the cities which symbolize the hopes and aspirations of New India, and the new generation.

The Prime Minister noted that under the Smart City Mission, projects worth Rs. 7000 crore have been completed, and projects worth Rs. 52,000 crore are under implementation. He said this mission aims to provide the lower, lower middle and middle class with better civic amenities, and make their lives simpler. He said Integrated Command Centres are an important part of this mission. He said these Centres have started functioning in 11 cities, and work is underway in many more cities.

Recalling the efforts of former Prime Minister Atal Bihari Vajpayee, Shri Narendra Modi said that the vision to Transform the Landscape of Urban India is closely connected with Lucknow, from where Shri Vajpayee was an MP.

Appreciating the various initiatives taken by Shri Atal Bihari Vajpayee, the Prime Minister said that the Union Government has worked to augment the speed, scale, and quality of living, keeping the spirit of those initiatives intact. He said the Government wishes to provide Housing for All by 2022. Giving statistics, the Prime Minister explained how a lot of work has already been done in this direction. He said the houses being made today have a toilet and an electricity connection. He said these houses are also a symbol of women empowerment, as they are registered in the name of women.

Responding to recent criticism, in an impassioned statement the Prime Minister asserted that he is a partner for the poor and underprivileged; the farmers and the jawans, in their misery and hardship; and wants to decisively end their suffering.

The Prime Minister said that India once had well planned urban spaces. But lack of political will, and clear thinking, especially after independence, had caused immense damage to our urban centres.

He said India is growing rapidly today, and the cities which are its growth engines, cannot continue to develop haphazardly. He said the Smart City Mission will help prepare our cities to take up the challenges of New India; and prepare world class intelligent urban centres in India, for the 21st century. He said living spaces should be characterized by the 5 “E”s: Ease of Living; Education, Employment, Economy and Entertainment.

The Prime Minister also said that the Smart City Mission is based on civic participation, civic aspiration, and civic responsibility. He said the cities of Pune, Hyderabad and Indore have raised significant sums of money through Municipal Bonds; and other cities such as Lucknow and Ghaziabad would soon follow suit. He said that as civic services become available online, queues, which were a source of corruption, are being eliminated. He said smart, secure, sustainable and transparent systems are transforming the lives of crores of people.