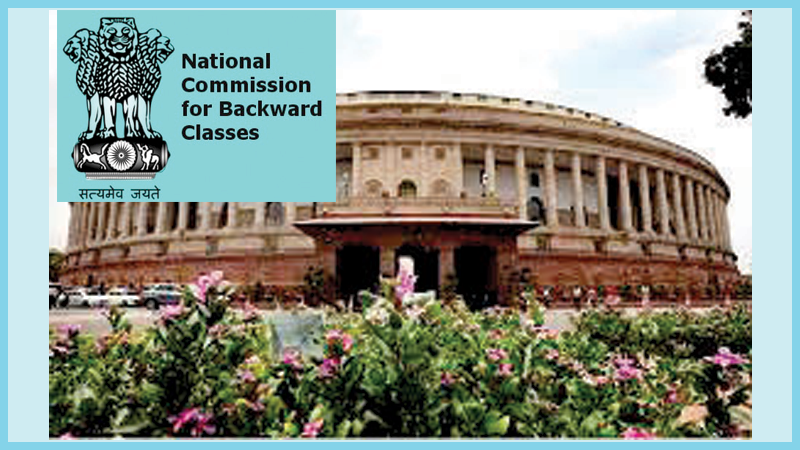 Akey bill to provide constitutional status to the National Commission for Backward Classes (NCBC) secured Parliament’s approval on 06 August with the Rajya Sabha passing the measure that will give the panel full powers to safeguard the rights and interests of the Other Backward Classes (OBCs).

The Constitution (123rd Amendment) Bill 2017 was passed after a spirited debate during which several members urged the Centre to make public the findings of the caste census and implement reservation accordingly. It was cleared by the Lok Sabha on 02 August superseding the amendments earlier carried out by the Rajya Sabha.Prime Minister Narendra Modi and BJP President Shri Amit Shah termed as “historic” the passage of the bill.

The bill was passed after the Upper House repealed the National Commission for Backward Classes Act, 1993.

The NCBC, a statutory body created in 1993, was given limited powers – only to recommend to the government inclusion or exclusion of a community in the central list of OBCs. Also, the power to hear complaints of the OBCs and protect their interests remained with the National Commission for Scheduled Castes.

The Rajya Sabha adopted the bill along with the amendments made by the Lok Sabha, by 156 votes to nil. Over two-thirds majority of those present voted in favour of the bill, which is a necessity for amending the Constitution.

It earlier passed the measure on July 31 last year along with an amendment and sent it to the Lower House. The Lok Sabha approved the bill on August 2with alternative amendments as well as some more changes unanimously with over two-thirds majority.

Replying to the debate, Social Justice and Empowerment Minister Shri Thaawarchand Gehlot said the bill would help the backward classes people fight atrocities against them and ensure quick justice to them. “This bill would provide justice to the OBC people, it is the need of the hour,” he added,

In his reply, Shri Gehlot also assured members that the legislation would not encroach upon the rights of state governments as they would have their own backward class commissions. “This commission has no relation with the state governments but is related to the Centre only.”

He said the state governments had their own lists of castes of OBC people, while the Centre had its own. The NCBC would recommend only to the central government regarding inclusion or deletion of a particular caste in the list.

“This is an important issue. There was a demand for a constitutional status to the OBC Commission from the 1980s and Parliament had held discussions several times. It has been discussed by the Standing Committee,” Shri Gehlot said, urging the members to pass the bill expeditiously.

He said once the bill is passed by Parliament, the government would immediately form the Commission.

He said the Bill is long overdue and lamented that many states have not implemented 27 per cent reservation to the OBCs, adding that parties should “rise above vote bank politics and work towards social justice”.


“A historic moment for our country! I am glad that Parliament has passed the Constitution (123rd Amendment) Bill, which grants Constitutional status to the National Commission for Backward Classes. This will contribute to the empowerment of the OBC communities across India,”

BJP National President Shri Amit Shah congratulated Prime Minister Shri Narendra Modi and BJP-led NDA government on passing of the OBC Commissions Bill giving the constitutional recognition, he said that it was huge historical step to fulfill the aspirations of millions of people of the country.

“Whenever the history of the uplift and self-respect of the Dalit, tribal and backward class society of this country will be written, then this work of Modi Government will always be marked in gold, because with the same motivation, Modi Government is serving for them. At the center point of every plan and every program of the Modi government, there are Dalits, Tribal, backward and poor of the country.

Mission Antyodaya is the resolution of Prime Minister Shri Narendra Modi and his objective is to establish an equitable society in the country. With the passing of this bill, a new chapter has been initiated for the up gradation of the backward class society in the country. Now many issues of the people of the backward classes can be resolved through the constitutional forum of the OBC Commission.

Under the leadership of Prime Minister Shri Narendra Modi, the Bharatiya Janata Party government has undertaken many schemes to uplift the Dalit, tribal, backward, village, poor, farmer of the country, and has brought about a new light in their lives.

Since 1955, the backward class society of the country was demanding constitutional recognition of the OBC Commission, today this historic work has been done by the Bharatiya Janata Party government under the leadership of Prime Minister Shri Narendra Modi, in 2018 and we all feel proud.”