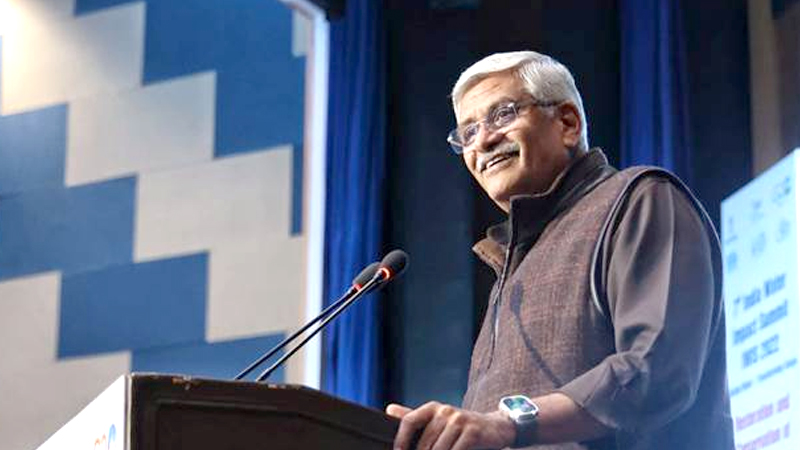 Union Minister for Jal Shakti Shri Gajendra Singh Shekhawat on 15th December 2022 inaugurated the 7th Edition of the India Water Impact Summit (IWIS) at New Delhi. The theme of this year’s Summit is ‘Restoration and Conservation of Small Rivers in a Large Basin’ with emphasis on the select aspects of ‘Mapping and Convergence of 5Ps’ – People, Policy, Plan, Programme and Project. In the three-day Summit (15th to 17th December 2022) experts from the country and abroad will discuss ways in which small rivers in large river basins can be protected.

Addressing the gathering, Union Minister for Jal Shakti Shri Gajendra Singh Shekhawat said deliberations on issues of water and rivers is equivalent to discussing the future of human beings and the crisis facing them. He said that the way the Namami Gange Mission has worked for the conservation of rivers in the last 7 years is commendable. “In accordance with the vision of the Prime Minister, Namami Gange has become a mass movement and people from all walks of life are contributing in their own way to the cause.”

He added that every river in India has been given the status of a Mother and India has a rich tradition of revering and respecting Mothers. He said that India’s sages and ancestors held traditional wisdom and awakened the spirit of water conservation among the people through scriptures. Shri Shekhawat added that the Hon. Prime Minister espoused the concept of Arth Ganga that primarily means establishing people-river connect through the bridge of economy. Expressing his happiness on the work being done under Namami Gange in a time-bound manner under the leadership of Prime Minister Shri Narendra Modi, he said that the infrastructure is being created towards the rejuvenation of River Ganga and its tributaries and the positive results are being nationally as well as globally recognized.

Commenting on the theme of the 7th Edition of the IWIS, Shri Shekhawat said that small rivers and rivulets have been an integral part of India’s tradition and culture and it is most opportune that necessary deliberations will take place on how to revive small rivers through 5Ps’ – People, Policy, Plan, Programme and Project – to rejuvenate large basins like River Ganga.

Shri Pankaj Kumar, Secretary, Department of Water Resources, River Development and Ganga Rejuvenation, Ministry of Jal Shakti began his address by outlining the focus of the Summit, which is to restore and observe small rivers in the large basins and emphasizing on important aspects of small river systems. He noted how small rivers tend to be neglected due to the focus on conserving and restoring large rivers. He reflected on the hard work being done by NMCG in expediting the work towards Ganga Rejuvenation, which can be seen in the completion of projects in a time-bound manner significantly improving the water quality. He said that the focus now is on the entire ecosystem of rivers in India. He noted that the Summit would deliberate upon the important aspects of small river restoration projects. He called upon the need for different institutions, government bodies and private individuals to work together towards river rejuvenation. Giving the example of Hindon river and pointing out multiple dependencies in carrying out the task of reviving small rivers, he said that a plan has been prepared to rejuvenate Hindon by making industries and other stakeholders key partners. He hoped that the deliberations would come up with recommendations to help forming a framework for restoring small rivers in the country. He hoped this could serve as a tool kit for states, district administrations, and various ministries, which can help restore the country’s whole ecosystem.

Prof. Vinod Tare, Department of Civil Engineering, IIT Kanpur, said that Ganga is not just a river but one of the country’s most sacred rivers. That is why the conservation and promotion of Ganga is the most important task. In such a situation, it becomes necessary that its tributaries and small rivers should be rejuvenated. He noted that it is impossible to achieve the Ganga conservation goal without rejuvenating small rivers. He suggested the projects being run by different organizations and institutions should work in collaboration to accelerate the rejuvenation of small rivers in the big basin. He emphasized the need to create our own conservation benchmarks to evaluate external technology and ensure its usefulness for the country’s rivers and conservation programmes.

Shri D.P. Mathuria, Executive Director (Technical), NMCG gave the welcome address and reflected upon NMCG’s journey towards water conservation. He said there had been a significant improvement in the water quality of river Ganga. He said that several projects are various stages of execution and commissioning of assets will further improve the river’s water quality and its tributaries. He noted how the District Ganga Committees had become an important institution for coordinating various activities for rejuvenating the rivers, especially small rivers. He outlined how the Summit can provide suitable technological models for implementing various activities by leveraging financial resources from various schemes.

During the event, PTB, an online learning course of quality control for Monitoring Water Quality Analysis was also launched by the Hon. Union Minister. It is created by one of NMCG’s international partners, the German National Metrology Institute PTB. This online learning platform aims to strengthen quality infrastructure for water monitoring of the river Ganga. This will be done through the data collected in the river basin of Ganga to monitor water quality based on recognized quality-assurance measures. The online training will support the efforts aimed towards achieving this objective.

Day 1 also marked sessions on ‘Setting the Goal to Determine Healthy Status of the River’, Hybrid Model for International Companies’ and ‘International Collaboration’.