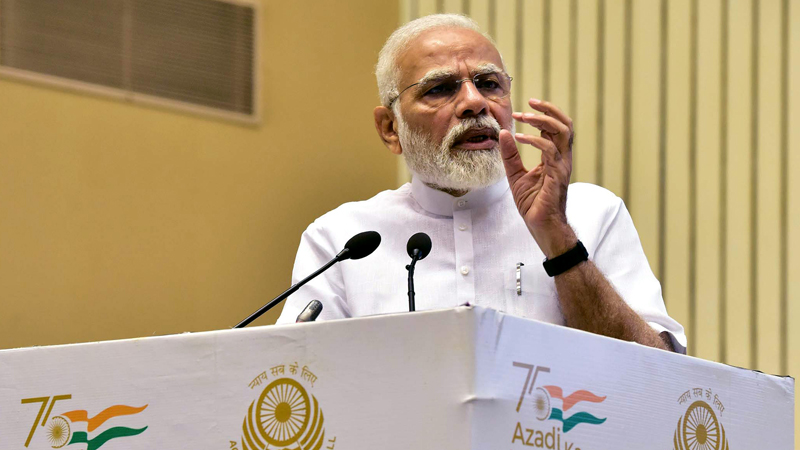 Addressing the gathering, the Prime Minister said this is the time of Azadi ke Amrit Kaal. This is the time for the resolutions that will take the country to new heights in the next 25 years. Like Ease of Doing Business and Ease of Living, Ease of Justice is equally important in this Amrit Yatra of the country, he said.

The Prime Minister highlighted the place of legal aid in the Directive Principles of the State Policy. This importance is reflected in the faith of the citizens in the Judiciary of the country. He said “as important as access to the judicial system is for any society, justice delivery is equally important. The judicial infrastructure also has an important contribution to this. In the last eight years, work has been done at a fast pace to strengthen the judicial infrastructure of the country.”

Underlining India’s leadership in information technology and fintech, the Prime Minister stressed that there can not be a better time to introduce more power of technology to judicial proceedings. He said “under the e-Courts Mission, virtual courts are being started in the country. 24-hour courts have started functioning for crimes like traffic violations. Video conferencing infrastructure is also being expanded in the courts for the convenience of the people.” The Prime Minister said that more than one crore cases have been heard through video conferencing in the country. This proves that “our judicial system is committed to the ancient Indian values of justice and, at the same time, is ready to match the realities of the 21st century.” He further said “a common citizen should be aware of his rights and duties in the constitution. They should be aware of their constitution, and constitutional structures, rules and remedies. Technology can play a big role in this too.”

Reiterating that Amrit Kaal is a period of duty, the Prime Minister said we have to work on the areas that have remained neglected so far. Shri Modi once again raised the issue of sensitivity towards undertrial prisoners. He said that the District Legal Services Authorities can take up the responsibility of providing legal aid to such prisoners. He also appealed to the District Judges, as Chairpersons of undertrial review committees, to expedite the release of undertrial prisoners. The Prime Minister complimented NALSA for undertaking a campaign in this regard. He also urged the Bar Council to encourage more lawyers to get involved in this campaign.

The first-ever national level meet of District Legal Services Authorities (DLSAs) is being organised from 30-31 July 2022 at Vigyan Bhawan by National Legal Services Authority (NALSA). The meeting will deliberate on the creation of an integrated procedure in order to bring homogeneity and synchronisation across DLSAs.

There are a total of 676 District Legal Services Authorities (DLSAs) in the country. They are headed by the District Judge who acts as Chairman of the authority. Through DLSAs and State Legal Services Authorities (SLSAs), various legal aid and awareness programmes are implemented by NALSA. The DLSAs also contribute towards reducing the burden on courts by regulating the Lok Adalats conducted by NALSA.