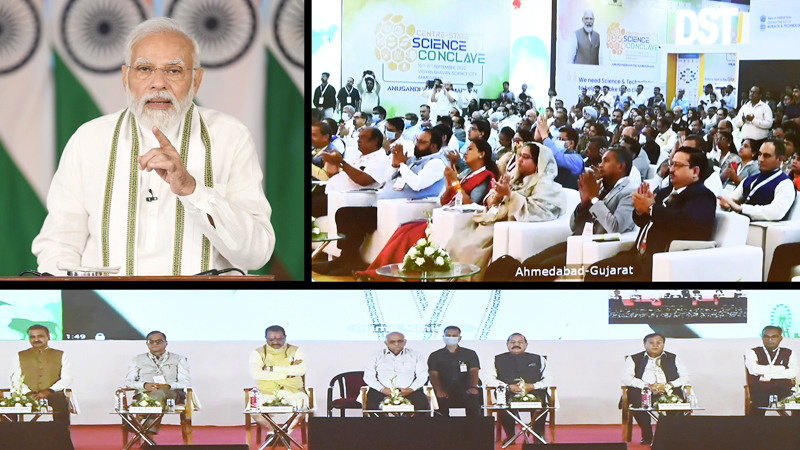 Addressing the gathering, the Prime Minister highlighted that the organisation of this conclave is a clear example of Sabka Prayas. The Prime Minister remarked “Science is like that energy in the development of 21st century India, which has the power to accelerate the development of every region and the development of every state. Today, when India is moving towards leading the fourth industrial revolution, the role of India’s science and people related to this field is very important. In such a situation, the responsibility of people in administration and policy making increases significantly.”

The Prime Minister emphasized that Science is the basis of solutions, evolution and innovation. And, it is with this inspiration, that today’s new India is moving forward with Jai Jawan, Jai Kisan, Jai Vigyan as well as Jai Anusandhan.

Commenting on the lessons that we can learn from history that will help both the centre and the states, the Prime Minister said if we remember the early decades of the last century, we find how the world was going through a period of devastation and tragedy. But even in that era, whether it was about the East or the West, scientists everywhere were engaged in their great discovery. In the West, scientists like Einstein, Fermi, Max Planck, Niels Bohr, and Tesla were dazzling the world with their experiments. In the same period, many scientists including CV Raman, Jagdish Chandra Bose, Satyendranath Bose, Meghnad Saha, and S Chandrashekhar were bringing their new discoveries to the fore. The Prime Minister underlined the difference between the East and West as we were not giving due recognition to the work of our scientists. The Prime Minister pointed out that when we celebrate the achievements of our scientists, science becomes part of our society, it becomes part of the culture. Shri Modi also requested everybody to celebrate the achievements of the scientists of our country. “Scientists”, the Prime Minister said, “are giving ample reasons to the country to celebrate them.” He lauded the role of Indian scientists in developing the Corona vaccine and contributing to the world’s biggest vaccine drive.

The Prime Minister reiterated that the government is working with the thinking of Science-Based Development. “Since 2014, there has been a substantial increase in investment in the field of science and technology. Due to the efforts of the government, today India is ranked 46th in the Global Innovation Index, whereas in 2015, India was at number 81”, the Prime Minister added. He acknowledged the record number of patents being registered in the country. He also noted the climate of innovation and a vibrant startup ecosystem.

The Prime Minister pointed out that “inclination for science, technology and innovation is in the DNA of our young generation. We need to support this young generation with full strength.” The Prime Minister listed new sectors and missions in the field of research and innovation to support the innovative spirit of the youth. He gave examples of Space Mission, National Supercomputing Mission, semiconductor mission, Mission Hydrogen and drone technology. Similarly, NEP is promoting this by providing Science and technology education in the mother tongue.

The Prime Minister highlighted that in order to make India a global centre of research and innovation in this Amrit Kaal, we have to work on many fronts simultaneously. He stressed the need to take science and technology-related research to the local level. He asked states to promote research and innovation as per their local needs. The Prime Minister remarked that innovation can be encouraged by laying emphasis on the creation of more and more scientific institutions and simplification of processes by the state governments. He further added that the number of innovation labs should also be increased in the institutions of higher education in the states. He also asked every state to lay down modern policy regarding Science, innovation and technology. “As governments, we have to more and more cooperate and collaborate with our scientists, this will create an atmosphere of a scientific modernity”

The Prime Minister stressed that the states should take full advantage of the ability and expertise of many national-level scientific institutes, and national laboratories that are present. “We also have to take our science-related institutions out of the state of silos for optimum utilisation of scientific institutions and expertise”, the Prime  Minister added. He asked for science promotion events at the grassroots level. He also advised the state Science Ministers to share good practices and aspects of their science curriculum.

Chief Minister of Gujarat, Shri Bhupendra Patel and Union Minister of State of Science and Technology, Dr Jitendra Singh were those present on the occasion.

In line with the Prime Minister’s relentless efforts to facilitate innovation and entrepreneurship in the country, the first-of-its-kind Conclave will strengthen Centre-State coordination and collaboration mechanisms  – in the spirit of cooperative federalism – to build a robust science, technology & innovation (STI) ecosystem across the country.

The two-day Conclave is being organised at Science City, Ahmedabad on 10-11 September 2022. It will include sessions on different thematic areas including  STI Vision 2047; Future Growth Pathways and Vision for STI in States; Health –  Digital Health Care for All; Doubling Private Sector investment in R&D by 2030; Agriculture – Technological interventions for improving farmers’ income; Water –  Innovation for producing potable drinking water; Energy- Clean Energy for All including S&T role in Hydrogen mission; Deep Ocean Mission and its relevance for Coastal States/UTs as well as country’s future economy.