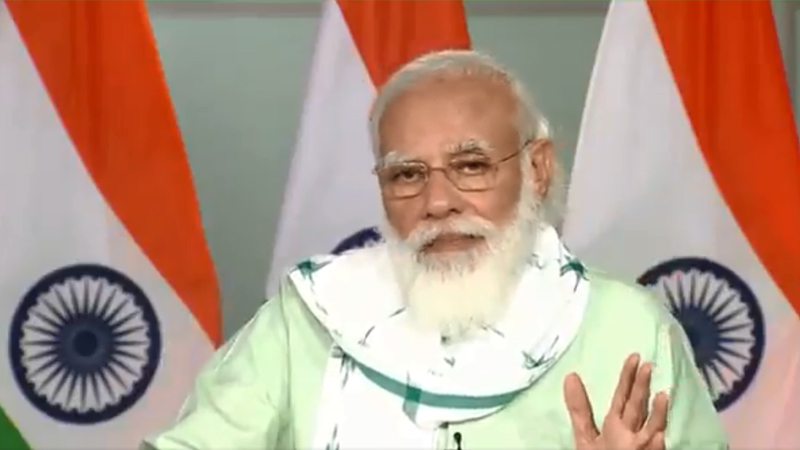 Shri Modi launched the Kisan Suryodaya Yojana for providing 16 hours of power supply to farmers. He also inaugurated the Paediatric Heart Hospital attached with U.N Mehta Institute of Cardiology and Research Centre and a Mobile Application for tele-cardiology at the Ahmedabad Civil Hospital in Ahmedabad.

The Prime Minister also inaugurated the Ropeway at Girnar on the occasion.

Speaking on the occasion, he said Gujarat has always been an exemplary model for the determination and dedication of the common man. He added after the Sujalam-Suflam and Sauni scheme, the kisan Suryodaya Yojana Gujarat has set a milestone in meeting the needs of the Gujarat Farmers. He said the work done in Gujarat for years in the field of electricity, has become the basis of this scheme. He said from power generation to transmission all the works were carried out in mission mode to improve the capacity in the state. He said in 2010 when the Solar Power Plant was inaugurated in Patan, nobody could have imagined that India would show the world the path for One Sun, One World, One Grid. Prime Minister appreciated the fact that India has now reached 5th position in the world in the last few years in solar power and is advancing fast.

The Prime Minister also lauded the efforts of the Gujarat government for doing this work by preparing a completely new capacity of transmission, without affecting the other existing systems. Under this scheme, about 3500 circuit kilometers of new transmission lines will be laid in the next 2-3 years and will be implemented in more than a thousand villages in the coming days and most of these villages are in tribal dominated areas. He said it will change the lives of lakhs of farmers, when the entire Gujarat gets the power supply through this scheme.

The Prime Minister urged to work continuously in line with the changing times to help the farmers in doubling their income, by reducing their investment and overcoming their difficulties. He listed the initiatives of the Government to double the income of the farmers like formation of thousands of FPOs, neem coating urea, Soil Health Cards and launching of many new initiatives. He said under KUSUM yojana, FPOs, Panchayats and all such organizations are assisted in setting up small solar plants on barren lands and that irrigation pumps of farmers are also connected to the solar energy. He added the electricity generated from this will be used by the farmers for their irrigation and they can sell the surplus power.