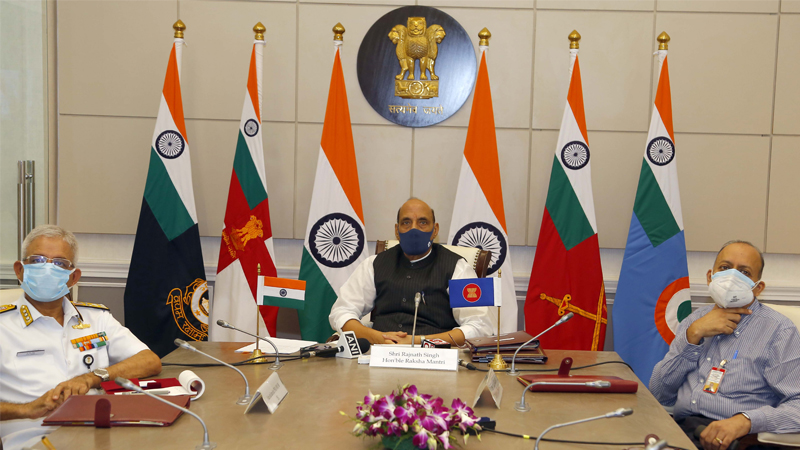 Raksha Mantri Shri Rajnath Singh called for an open and inclusive order in Indo-Pacific based upon respect for sovereignty and territorial integrity of nations while addressing the 8th ASEAN Defence Ministers Meeting (ADMM) Plus on June 16, 2021. The ADMM Plus is an annual meeting of Defence Ministers of 10 ASEAN (Association of Southeast Asian Nations) countries and eight dialogue partner countries – Australia, China, India, Japan, New Zealand, Republic of Korea, Russia and the United States. Brunei is the Chair of the ADMM Plus forum this year. Shri Rajnath Singh also stressed on “peaceful resolutions of disputes through dialogue and adherence to international rules and laws.”

“India has strengthened its cooperative engagements in the Indo-Pacific based on converging visions and values for promotion of peace, stability and prosperity in the region. Premised upon the centrality of ASEAN, India supports utilisation of ASEAN-led mechanisms as important platforms for implementation of our shared vision for the Indo-Pacific,” he added.

During thematic discussions on regional and international security environment, Shri Rajnath Singh put forth India’s views before the Defence Ministers of ASEAN countries and eight dialogue partners. He stressed that the emerging challenges to international peace and security cannot be addressed with outdated systems designed to deal with trials of the past.

The Raksha Mantri reiterated India’s support to freedom of navigation, over-flight and unimpeded commerce for all in international waters in accordance with the UN Convention on the Law of the Sea (UNCLOS). “Maritime security challenges are a concern to India. The Sea lanes of Communication are critical for peace, stability, prosperity and development of the Indo-Pacific region,” he stressed. The Raksha Mantri hoped that the Code of Conduct negotiations will lead to outcomes keeping with international law and do not prejudice the legitimate rights and interests of nations that are not party to these discussions.

On the ‘Act East Policy’, announced by Prime Minister Shri Narender Modi in November 2014, Shri Rajnath Singh stated that the key elements of the policy aim to promote economic cooperation, cultural ties and develop strategic relationships with countries in the Indo-Pacific region through continuous engagement at bilateral, regional and multilateral levels.

Terming terrorism and radicalisation as gravest threats to world peace and security, Shri Rajnath Singh called for collective cooperation to fully disrupt terror organisations and their networks; identify the perpetrators and hold them accountable and ensure that strong measures are taken against those who support and finance terrorism and provide sanctuary to terrorists. As a member of the Financial Action Task Force (FATF), he said India remains committed to combat financing of terrorism.

To deal with cyber threats, the Raksha Mantri called for a multi-stakeholder approach, guided by democratic values, with a governance structure that is open and inclusive and a secure, open and stable internet with due respect to sovereignty of countries, that would drive the future of cyberspace.

On the most recent challenge faced by the world, COVID-19, Shri Rajnath Singh said the effect of the pandemic is still unfolding and the test, therefore, is to make sure that the world economy moves on the path of recovery and no one is left behind. This is only possible if entire humanity is vaccinated, he stated. “Globally available patent free vaccines, unhindered supply chains and greater global medical capacities are some of the lines of effort that India has suggested for a combined effort,” he highlighted.

Referring to the Humanitarian Assistance and Disaster Relief (HADR) operations, the Raksha Mantri stated that India remains one of the first to respond in times of distress in the immediate as well as extended neighbourhood. As a founding member of the Heads of Asian Coast Guard Agencies Meeting (HACGAM), India seeks to enhance capacity building through collaboration in the areas of Maritime Search & Rescue, he added.

Shri Rajnath Singh also underscored the importance India attaches to ASEAN centrality and unity in ensuring peace and stability in the region. He said India shares a deep connect with ASEAN and has continued its active engagement in many areas contributing to regional peace and stability, particularly through ASEAN led mechanisms, such as East Asia Summit, ASEAN Regional Forum and ADMM-Plus. The India-ASEAN strategic partnership has been strengthened by virtue of flourishing cultural and civilisational links and enhanced people-to-people cooperation, he added. The Raksha Mantri thanked Brunei for conducting the ADMM Plus despite the restrictions imposed by COVID-19.

Defence Secretary Dr Ajay Kumar and Chief of Integrated Defence Staff to the Chairman Chiefs of Staff Committee (CISC) Vice Admiral Atul Kumar Jain and other senior officials of Ministry of Defence and Ministry of External Affairs attended the meeting.