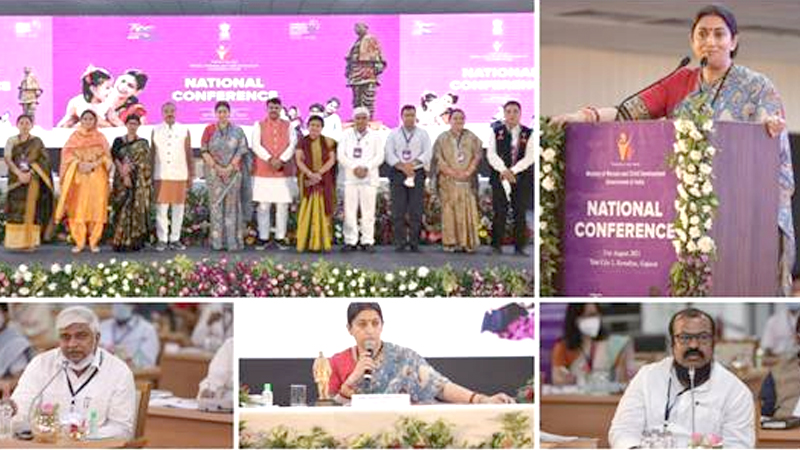 Minister for Women and Child Development Smt. Smriti Zubin Irani chaired the National Conference, 2021, which was held on the 30th and 31st of August atKevadia, Gujarat, and was attended by Dr MahendrabhaiMunjpara, Minister of State for WCD and Ministers from various States, as well as Principal Secretaries of States/ UTs Women and Child Development / Social Welfare Department. The National Conference was a platform to discuss and deliberate on better implementation and governance of schemes and programmes of the Ministrynamely, the new initiatives on the three key missions: Mission Poshan 2.0, Mission Vatsalya, and Mission Shakti were discussed in detail.

The key event began on August 31st, 2021, with a tribute to the ‘LauhPurush’ of India, the great visionary, Sardar Vallabhbhai Patel, at the Statue of Unity by the Union Minister, WCD. Thiswas followed by planting of nutri-fruit saplings at Mahila Evam Bal Sashaktikaran Van, by the WCD Ministers of all States and UTs to exemplify the vision of ‘Ek Bharat Shreshth Bharat,’ and to promote plantation of PoshanVatikas / Nutri-gardens all over the country. 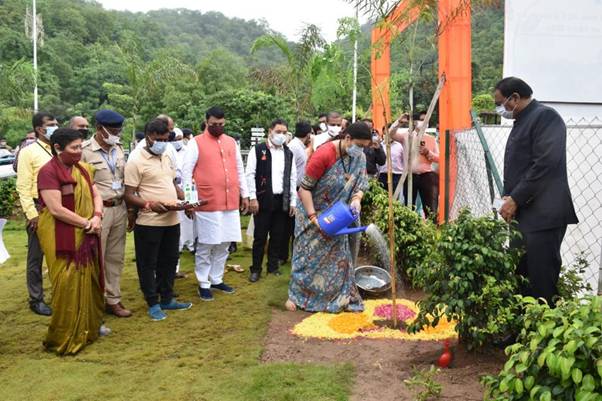 During the conference, presentations on the three key Missions and Global Indices were made by the senior officers of the Union Ministry. Furthermore, the Chairpersons of NCPCR and NCWalso presented their perspectives on child rights and women empowerment.The State representatives actively participated in the deliberations and provided their valuable inputs and suggestions.

Later in the day, Smt. Smriti Zubin Irani, Union Minister for Women and Child Development, delivered the keynote address, sharing her vision for the future of women and children of India. The Union minister while expressing her ideas about Mission Poshan 2.0, mentioned that Poshan Maah 2021 was going to commence from 1st September 2021. She urgedall the State governments to participate in it wholeheartedly and decide on their own the targets for developing PoshanVatikas; carrying out drives for identification and follow-up treatment of SAM children in consonance with Streamlined guidelines of 13thJanuary,2021.She also requested the States to improve the infrastructure of AWCs andsaturate the supply of mobile phones and GMDs during the month.

While elaborating on Mission Vatsalya, the Cabinet Minister, WCD emphasised the importance of recent amendments in Juvenile Justice (JJ) Act. She expressed that it would increase the accountability of DC/DMs and would facilitate reintegration of vulnerable children into the society. She requested the representatives of State governments to provide their views and suggestions for Rules to be framed under JJ Amendment Act.

Dr. MahendrabhaiMunjpara, Minister of State in the Ministry of Women and Child Development, also shared his views at the event. The Conference with States/UTs exemplified the true spirit of our federal structure, resulting in coordinated and convergent efforts for the development and welfare of the country’s women and children