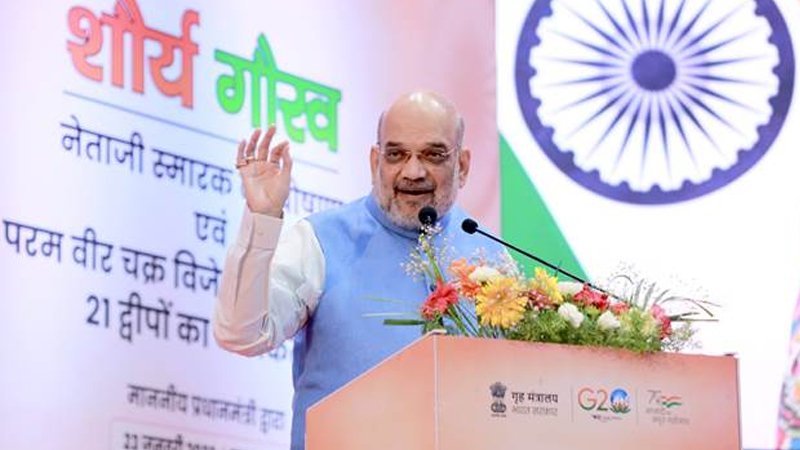 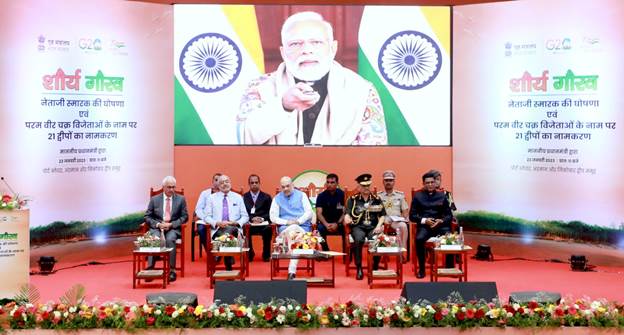 In his address, Shri Amit Shah said that today is a very important day for all the tri-forces of the country because before this no other country in the world has honored the valor of soldiers by naming islands after them. Today, Prime Minister Narendra Modi’s effort to create a forever memory of our Param Vir Chakra Awardees is very encouraging for all the three forces. He said that today, the 126th birth anniversary of Netaji Subhas Chandra Bose is being celebrated as Parakram Divas across the country. On this occasion, it has also been decided to make a memorial for Netaji at Subhas Dweep in the Andaman and Nicobar Islands, where he stayed during the freedom movement. Shri Shah said that these two decisions taken by the Prime Minister Narendra Modi will connect the memories of the independence of the Andaman and Nicobar Islands with the whole country and through these decisions, patriotism, bravery and valor will be instilled in the young generation of India for ages.

The Union Home Minister said that sometimes a land has such an element that it attracts everyone’s attention time and again. After the revolution of 1857, when the British started mercilessly torturing the freedom fighters, then on this land of Andaman and Nicobar Islands, our revolutionaries were kept in Cellular Jail, at that time this land of Andaman and Nicobar, consoled the freedom fighters like a mother. He said that Cellular Jail is a great place of pilgrimage for the freedom struggle and due to Netaji’s efforts to liberate the country, ‘Azad Hind Fauj’ honored this part of country with freedom and Netaji hoisted the tricolor for the first time on this island.

The Union Home and Cooperation Minister said that the Andaman and Nicobar Islands had already become a place of pilgrimage for freedom due to the Cellular Jail, then Netaji liberated and hoisted the tricolor on this holy land. Following the footsteps of Netaji, Prime Minister Shri Narendra Modi named Shaheed Dweep, Swaraj Dweep and Subhas Dweep and today, named 21 islands in the name of those who fought for the freedom and sovereignty of the country by sacrificing their lives. Shri Shah said that today, by naming 21 islands after these bravehearts, Prime Minister Narendra Modi has honored their valor. Whenever the history of entire India will be written, then this incident will be written in golden letters. The Union Home and Cooperation Minister said that the Amar Jyoti to be built in the memory of the revolutionaries who were in the Cellular Jail, was left incomplete, it was completed by the Government of India under the leadership of Prime Minister Shri Narendra Modi to pay tribute to them for ages. He said that today, from Major Somnath Sharma to Subedar Major Yogendra Singh Yadav, Prime Minister Shri Narendra Modi has made these brave soldiers of country forever memorable from which many generations will take inspiration and imbibe these values of patriotism and bravery.

Shri Amit Shah said that the Netaji memorial has been announced at Subhas Island, today. Apart from this, a museum, rope-way, laser light and sound show, amusement park and arrangements for eateries will also be made. He said that it is the effort of the Government of India to develop this memorial in such a way that many generations to come can take inspiration and imbibe the values from the bravery of freedom fighter Subhas Chandra Bose.

The Union Home and Cooperation Minister said that after the formation of Government under the leadership of Prime Minister Narendra Modi, many steps have been taken for the Defense Forces since 2015. The issue of One Rank One Pension was resolved, historical changes were made in the administrative structure of the army, efforts were made to make the system self-sufficient and many steps were taken to equip all the three forces with modern weapons and modern communication system. Today, an important step has been taken to honor the 21 Paramveer Chakra awrdees by naming the 21 islands after them. Shri Shah said that both of these decisions will give message and values of patriotism and bravery to the young generation of India for ages.