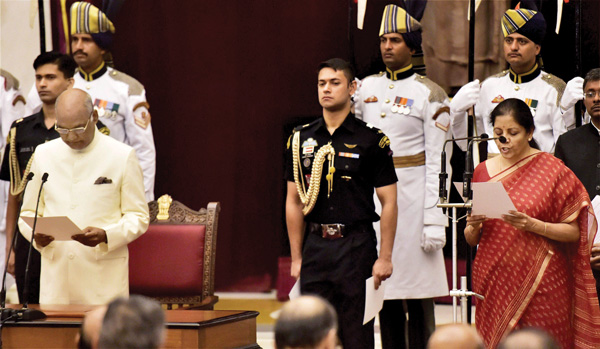 Prime Minister Shri Narendra Modi on September 3 inducted 9 new ministers and promoted 4 others to the cabinet rank in his third cabinet reshuffle since 2014.

The ministers who got promotion to the cabinet ranks are petroleum Minister Shri Dharmendra Pradhan, power minister Shri Piyush Goyal, minister of state at the ministry of commerce and industry Smt. Nirmala Sitharaman and minister of state for parliamentary affairs Shri Mukhtar Abbas Naqvi.
Nirmala Sitharaman in the reshuffle became the first full time female Defence Minister of India. Prior to this Sitharaman has served as a Minister of State for Finance and Corporate Affairs under the Ministry of Finance and the Minister for Commerce and Industry with independent charge.

Seeing the performance of Piyush Goyal he was promoted to Cabinet rank and given railway ministry.

Hardeep Singh Puri: The former diplomat has been made MoS (Independent Charge) of the Ministry of Housing and Urban Affairs. Puri served as India’s permanent representative to the United Nations in 2014 and held important positions in Brazil, Japan and Sri Lanka amongst other countries.
Anant Kumar Hegde: An agriculturist by profession, Anant Kumar Hegde is a five-time BJP Lok Sabha MP from Uttara Kannada in Karnataka was made New MoS in the Ministry of Skill Development and Entrepreneurship

R.K. Singh: A former home secretary and MP from Arrah Lok Sabha constituency in Bihar has been made MoS (Independent Charge) of the Ministry of Power and Ministry of New and Renewable Energy.

Ashwini Kumar Choubey: Ashwini Kumar Choubey, a member of Lok sabha was appointed as a MoS in the Ministry of Health and Family Welfare. He is currently a member of the parliamentary committee on estimates and standing committee on energy. Read more
Gajendra Singh Shekhawat: Jodhpur MP has been made the MoS in the Ministry of Agriculture and Farmers Welfare. Shekhawat is considered to be one of the better-performing MPs in the Lok Sabha. Among the 320 debates that Shekhawat participated in, he discussed issues including manual scavenging, human trafficking, child labour and rehabilitation of farmers.

Alphons Kannanthanam: The former bureaucrat has been made MoS (Independent Charge) of the Ministry of Tourism and MoS in the Ministry of Electronics and Information Technology.

Shiv Pratap Shukla: A Rajya Sabha MP from Uttar Pradesh has been made MoS in the Ministry of Finance and work under Finance Minister Arun Jatiley.