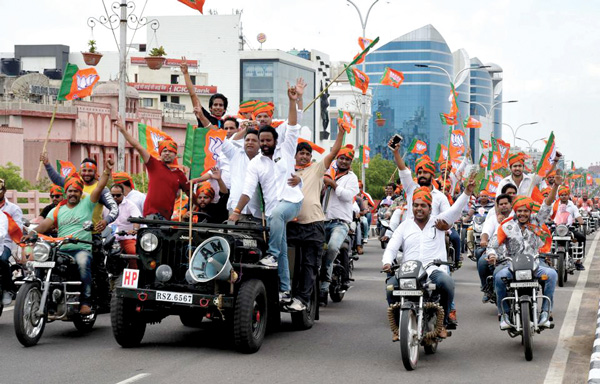 Rajasthan rolled out the red carpet for BJP National President Shri Amit Shah after his arrival on a commercial flight from Delhi to Jaipur for a three-day visit to Rajasthan on 21 July, 2017. Rajasthan Chief Minister Smt. Vasundhara Raje, BJP’s state President Shri Ashok Parnami and all other senior office bearers and leaders of the party received Shri Shah at the Airport.

Members of the BJP Mahila Morcha showered rose petals on the BJP President’s cavalcade when it stopped outside the airport. Upon alighting from his vehicle to greet his well-wishers, Shri Shah was presented with a memento.

Thousands of party Karyakartas, party leader and common people jubilantly greeted the BJP National President at eight places along his route. The BJYM activists led the procession on motorcycles all the way from the airport to the state BJP office on Sardar Patel Marg. On the way Shri Amit Shah also paid floral tributes to the statue of Mahatma Gandhi and BR Ambedkar.
Shri Shah later inaugurated the e-library at the state BJP office and chaired a meeting of the party’s core committee.

Noteworthy, Shri Amit Shah is on a whirlwind tour of the country to get direct feedback on the BJP’s prospects and performance from senior party leaders and workers. He also intends to strengthen party functionaries and booth-level units in the run-up to the elections.

‘Rajasthan BJP to be unbeatable’ 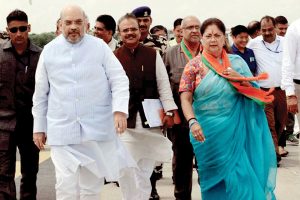 While addressing the media at the state BJP headquarters on the second day of his three-day visit, BJP National President Shri Amit Shah on 22 July, 2017 said that the state unit of the party would grow into an unbeatable political party by the ongoing process of strengthening of the organisation.

In terms of an organisation, the state BJP will be invincible. In the next four months, no political party would be able to come close to the performance of BJP in Rajasthan, forget beating it, Shri Shah said.

To a query related to loans of farmers being waived off, he said that union Finance Minister Shri Arun Jaitley has already clearly stated that the states need to decide themselves. “It is the state government’s decision,” he added.

In his address to the media, the BJP President listed out the achievements of the Narendra Modi government including demonetization and surgical strike; and applauded the flagship programmes and performance of the Raje government in the state.

Speaking on the Ram temple issue, he said that the party’s stand on it was always clear. It is even mentioned in the manifestos of the last four general polls. The temple should be constructed but in a legal manner and through mutual dialogue, he said.

Seers from all over the state met BJP National President

On the second day, BJP President Shri Amit Shah was greeted by seers, who came from all over the state to pay him a visit. During his interaction with the seers, the BJP President raised the issues of Ram temple and cow protection.

Shri Shah, accompanied by Chief Minister Smt. Vasundhara Raje and state BJP President Shri Ashok Parnami among others, met the seers and sought their blessings. A closed-door meeting took place between the BJP leaders and the seers.

“Shri Shah spoke on Indian culture, which has received many challenges over the years. His address was mainly focused on how we can keep it intact”, Mahant Gopal Das Maharaj of the Kale Hanuman temple told reporters after the meeting.
After the meeting, Shri Shah went to the BJP office to interact with party MPs and MLAs from Rajasthan, state BJP office-bearers and heads of various party wings separately.

Lunch with Dalit family in Rajasthan 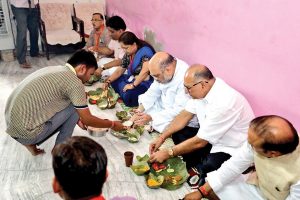 On the last day of his three-day visit to Rajasthan Shri Shah following rounds of meeting in the party office, left for Sushilpura in Jaipur where he had lunch at a Dalit house and BJP Yuva Morcha member Ramesh Pacharia.

They were served food by Shri Pacharia’s family and had lunch sitting on the ground. “My mother cooked Daal, Rice, Chapatti, Halwa, Kheer for the party National President,” Shri Pacharia told reporters.

Notable the narrow lanes of Sushilpura are populated by lower middle class and Dalit families. It is located in the middle of the capital city and witnessed VVIP movement for the first time. Excited people lined up on roads and congregated on rooftops to catch a glimpse of Shri Shah. Shri Shah spent an hour at the house of Shri Pacharia and interacted with the family members. He met the locals outside the house and waved to those standing on rooftops.

Highlights of the visit

In terms of an organisation, the State BJP will be invincible. In the next four months, no political party would be able to come close to the performance of BJP in Rajasthan, forget beating it, Shri Shah said.

On the last day of his three-day visit to Rajasthan Shri Amit Shah along with the CM and other BJP leaders had lunch at a Dalit house.