JP National President Shri Amit Shah arrived for two-day Pravas in Puducherry on 25 June, 2017 as part of his 110-day nationwide pravas to strengthen the party. Shri Shah, immediately after the commencement of his second visit to the union territory garlanded a statue of famous Tamil poet Subramania Bharathiyar near the Raj Nivas and later attended a meeting of office bearers of the party’s Puducherry unit. After his arrival here, a huge rally was taken out by party cadres through important thoroughfares from the airport to the town.

Union Minister Shri Pon Radhakrishnan and BJP National Secretary Shri H Raja were among those who accompanied him during his visit to Puducherry and the party’s programmes.

Addressing a ‘Professionals Convention’ organised by the local BJP unit, BJP President Shri Amit Shah said the Congress-led Puducherry government headed by Chief Minister V Narayanasamy is the most corrupt government. He also attacked the previous UPA government headed by Congress at the Centre for causing policy paralysis and said the Narendra Modi regime in contrast had implemented various schemes for all sections of people and was free of corruption.

Stating that the NDA government had been paying attention for the development of Puducherry, Shri Shah said it had sanctioned the Rs 1,850 crore ‘smart city’ project to the UT capital, evoking applause from the audience. However, the Narayanasamy government was most corrupt, he charged.
I have never seen such a corrupt and worst administration as the one in Puducherry… it is the most corrupt, he said. His remarks come close on the heels of Puducherry Lt Governor Kiran Bedi seeking a CBI probe into alleged large- scale corruption in admission of students to PG medical courses in the UT. Shri Shah said at the national level, a comparative evaluation would show that the “historic decisions taken by Prime Minister Shri Narendra Modi have now elevated the nation to a great level.” “Even the opposition could not say that there is corruption and malpractice under Shri Modi’s leadership”, he said.

The Modi government had implemented as many as 106 schemes so far to ameliorate the lot of weaker sections, women, youth, Dalits and scheduled tribes during the last three years. “Effective steps taken by the NDA regime through demonetization had led to checking of black money in the country,” the BJP President said. India had emerged as a global leader in space technology as could be seen from the launching of 104 satellites in one single mission recently, he said.

He also accused the previous UPA rule of having brought in damage to the reputation and image of the country through “policy paralysis. “Everyone knows how much decline the country had suffered in the economy and other sections during the UPA regime because of fall in various parameters of development,” Shri Shah said. On the contrary, the Narendra Modi-led government is functioning in full agreement with the legal provisions, he said while listing its ‘achievements’. He said by May next year, all the 18,000 villages would be brought under the rural electrification scheme.
The MUDRA scheme had enabled as many as 7.64 crore youth to get financial assistance to launch self employment projects across the country since the NDA government came to power, he said. 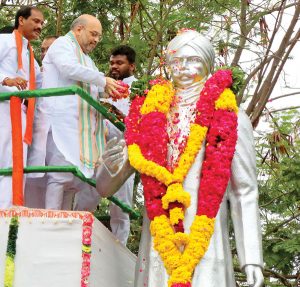 BJP National President also paid a visit to the world famous Matrimandir Meditation Chamber in Auroville. Despite the venue being temporarily closed from June 5 to July 5 for renovation work, special arrangements were made for the BJP leader to meditate inside the chamber.

Upon reaching the meditation chamber at 8:50 am, Shri Shah was accorded welcome by president of Auroville Foundation Mohan Varghese IAS. According to sources, Shri Shah also discussed with the chamber authorities, matters regarding the preparatory works for Prime Minister Narendra Modi’s visit to the Matrimadir next year. Following his mediation at Matrimandir, Shri Shah held discussion with Karyakartas and BJP office bearers from both Puducherry and Villupuram.