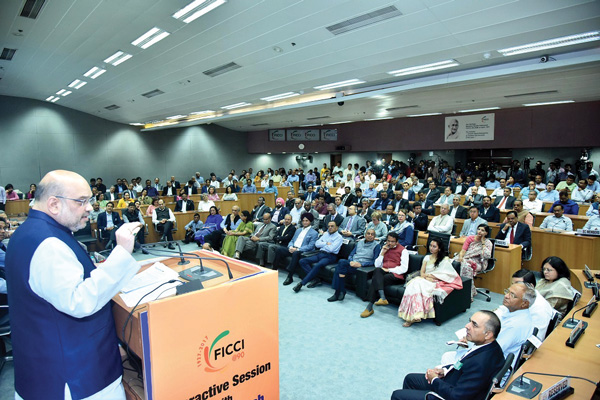 Addressing the Federation of Indian Chambers of Commerce and Industry (FICCI) in New Delhi, BJP National President Shri Amit Shah said one of Modi government’s biggest achievements were its battle against bank NPAs and boosting brand India by enhancing the scale of aspirations. He said that in contrast to the Congress led UPA government, the BJP regime under Shri Modi pursues policies eyeing long term gains.

He said we don’t associate our policy decisions with vote banks. We have continued trying taking hard steps for the betterment of the economy. Demonetization is the biggest example of that. There can be debate on this issue but everybody has to admit that because of demonetization, formal economy has expanded, Shri Shah said.

Money that was hitherto hidden in safes and godowns, is now back in the system and is being used for the development of the country, he said.

Shri Shah said that to understand the progress that has taken place under the Modi government, one should look into the 10 years of UPA.

From GDP growth rate plummeting to 4.7 per cent to current account deficit touching 5 per cent (of the GDP), there was economic disarray. With inflation at the highest, coupled with scams after scams, the credibility of the UPA government and the India’s image was at the lowest. There was complete policy paralysis during the Congress led UPA, it was a strange government where every minister considered himself/herself to be the Prime Minister and did not consider the Prime Minister (Manmohan Singh) to be the Prime Minister,” he said.

He said that in contrast to the UPA government, the BJP regime under Modi pursues policies eyeing long term gains.
The Modi government doesn’t believe in policies which people like rather policies which actually benefit people. The first thing which this government did was changing the approach towards GDP. Earlier GDP was only linked with agriculture growth, services and industrial growth and infrastructure had a confined meaning. We expanded that ambit.

Our approach is not just of ensuring GDP growth but also improving the quality of life of 1.25 crore people. If every house has a toilet, electricity and LPG cylinder, will GDP increase or not?” he asked

Shri Shah asserted the benefits of the battle against bad loans will be visible in the next 5-10 years. “By hiding a disease you cannot cure it. If NPAs are there, they are there. Simply not showing them in books or resorting to statistical jugglery doesn’t help. We took this hard measure of bringing all NPAs on record. The difficulties that are being faced will be solved, we will find ways to tackle them, and we will speak to all stakeholders, industrialists, banks and states to deal with the problem.

We don’t believe in hiding things, clearing the banks’ balance sheets is more important. No political leader except for Modi had the guts deal to with bad loans. Benefits of the bad loan battle will be visible in the next 5-10 years, he said. He said earlier the government was always in a dilemma over whether to go for welfare or reforms, whether to look for agriculture development or industry, whether the bureaucracy was important or parliament. But the Modi government has done away with this dilemma. This government is taking a balanced approach where reforms and the welfare go hand in hand.

Shri Shah said that the number of total direct taxpayers has doubled in the last three years from 3.7 crore to 6.4 crore besides over seven crore people benefitting from the Mudra bank initiative.

“Today thanks to the Mudra bank scheme, job seekers have become job providers,” he said.

We are able to save Rs 59,000 crore in subsidy because ghost beneficiaries have been eliminated. You can imagine the scale of corruption earlier by looking into the fact that Rs 14,000 crore has been saved which earlier was siphoned off. Very few people knew about this corruption and even the CAG couldn’t detect it. All this was possible because of Jan Dhan Yojana,” he added.
He also said the GST will ensure uniform growth for all the states and help them become more competitive.

BJP National President said that industry bodies like FICCI should change their approach and instead of just acting as an interface between the government and the industry, they should encourage research and development work in the country.