Addressing a public meeting on the occasion Prime Minister Shri Narendra Modi highlighted about the Mission Indradhanush and how it covered significant ground in vaccination. He also lauded Health Minister Shri JP Nadda for his efforts in this regard. PM Modi said that IIIT does not just mean setting up of a college, it is a stepping stone towards a more modern Himachal.

Remembering One Rank One Pension (OROP) issue. He said, “I had announced during the Mandi rally that we will give one rank one pension. Three installments have been given till now. Close to Rs 8,500 crore has been distributed.” 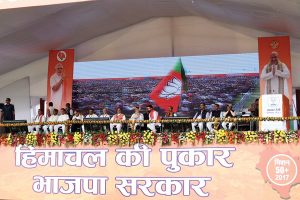 The Prime Minister highlighted several initiatives of the Central Government aimed at empowering and transforming lives of people across the country. He remarked that earlier there used to be only news about scams & corruption. Since NDA Govt came to power, there has been no news of corruption.

The PM applauded the work done by the people of Himachal in terms of cleanliness. He also asked people to continue their work in terms of Swachh Bharat as it would attract more tourism for the state.

Prime Minister Shri Narendra Modi also spoke about Pradhan Mantri Saubhagya Yojana, the scheme is aimed to provide power connections to all the estimated 4 crore households which currently did not have a power connection.