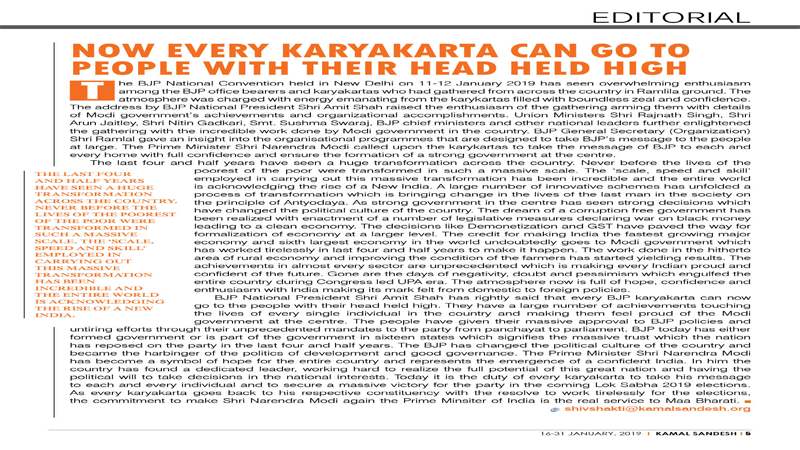 The BJP National Convention held in New Delhi on 11-12 January 2019 has seen overwhelming enthusiasm among the BJP office bearers and karyakartas who had gathered from across the country in Ramlila ground. The atmosphere was charged with energy emanating from the karykartas filled with boundless zeal and confidence. The address by BJP National President Shri Amit Shah raised the enthusiasm of the gathering arming them with details of Modi government’s achievements and organizational accomplishments. Union Ministers Shri Rajnath Singh, Shri Arun Jaitley, Shri Nitin Gadkari, Smt. Sushma Swaraj, BJP chief ministers and other national leaders further enlightened the gathering with the incredible work done by Modi government in the country. BJP General Secretary (Organization) Shri Ramlal gave an insight into the organisational programmes that are designed to take BJP’s message to the people at large. The Prime Minister Shri Narendra Modi called upon the karykartas to take the message of BJP to each and every home with full confidence and ensure the formation of a strong government at the centre.

The last four and half years have seen a huge transformation across the country. Never before the lives of the poorest of the poor were transformed in such a massive scale. The ‘scale, speed and skill’ employed in carrying out this massive transformation has been incredible and the entire world is acknowledging the rise of a New India. A large number of innovative schemes has unfolded a process of transformation which is bringing change in the lives of the last man in the society on the principle of Antyodaya. As strong government in the centre has seen strong decisions which have changed the political culture of the country. The dream of a corruption free government has been realized with enactment of a number of legislative measures declaring war on black money leading to a clean economy. The decisions like Demonetization and GST have paved the way for formalization of economy at a larger level. The credit for making India the fastest growing major economy and sixth largest economy in the world undoubtedly goes to Modi government which has worked tirelessly in last four and half years to make it happen. The work done in the hitherto area of rural economy and improving the condition of the farmers has started yielding results. The achievements in almost every sector are unprecedented which is making every Indian proud and confident of the future. Gone are the days of negativity, doubt and pessimism which engulfed the entire country during Congress led UPA era. The atmosphere now is full of hope, confidence and enthusiasm with India making its mark felt from domestic to foreign policies.

BJP National President Shri Amit Shah has rightly said that every BJP karyakarta can now go to the people with their head held high. They have a large number of achievements touching the lives of every single individual in the country and making them feel proud of the Modi government at the centre. The people have given their massive approval to BJP policies and untiring efforts through their unprecedented mandates to the party from panchayat to parliament. BJP today has either formed government or is part of the government in sixteen states which signifies the massive trust which the nation has reposed on the party in the last four and half years. The BJP has changed the political culture of the country and became the harbinger of the politics of development and good governance. The Prime Minister Shri Narendra Modi has become a symbol of hope for the entire country and represents the emergence of a confident India. In him the country has found a dedicated leader, working hard to realize the full potential of this great nation and having the political will to take decisions in the national interests. Today it is the duty of every karyakarta to take his message to each and every individual and to secure a massive victory for the party in the coming Lok Sabha 2019 elections. As every karyakarta goes back to his respective constituency with the resolve to work tirelessly for the elections, the commitment to make Shri Narendra Modi again the Prime Minsiter of India is the real service to Maa Bharati.