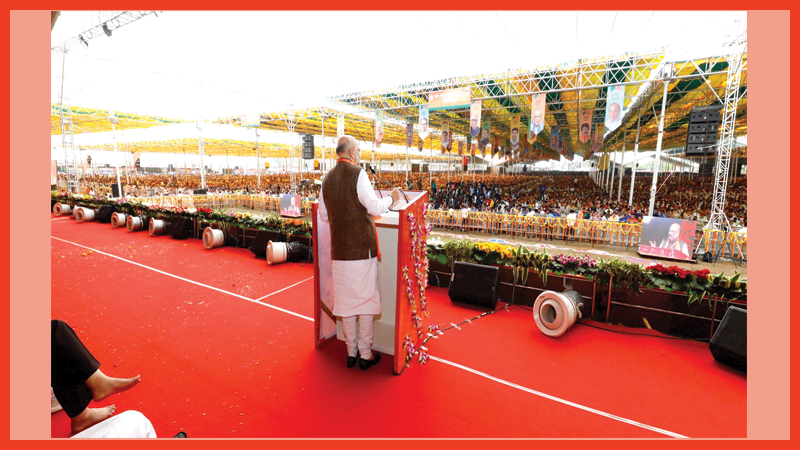 BJP President Shri Amit Shah welcomed the party workers to the ‘Karyakarta Mahakumbh’ in Bhopal. Addressing the gathering he remembered Pandit DeenDeendayal Upadhyay and said the party started by Deendayalji is moving forward under the leadership of Prime Minister Shri Narendra Modi. “Today the party is serving the 70 per cent of the country.”

Speaking to the Karyakartas Shri Amit Shah said, “NRC is the registration for citizens of India. In Assam, we made the NRC and found 40 lakh ‘infiltrators’ and they will be removed from the country after an investigation. Tell this to every house in Madhya Pradesh. The Congress created a huge hue and cry about the NRC. How much ever noise they create, I want to tell the Congress that NRC process will not stop. For BJP, security of the country is of prime importance”.

“The biggest achievement of our government is that PM Modi has taken India to new heights in the world order. The Prime Minister has never done anything that will make us hang our heads in shame. We work for development and not vote bank politics. Wherever he (PM Modi) goes, people shout slogans of “Modi, Mod, Modi….”, it is not for PM, but for the 125 crore Indians,” Shri Shah said.

Taking a jibe at Congress, he said the party has an illusion that it will win the elections. Recounting the states that went to polls and where the BJP overpowered Congress government, Shri Shah said, “We have made governments where we were in minority.”

Referring to the upcoming elections in the country, Shri Shah said Congress under the leadership of Rahul Gandhi claims to win major polls. “There is no harm in dreaming,” Shri Shah said.

“The people of the state gave you (Congress) an option to serve them. But there was no development in the state. Congress made MP a ‘bimaru’ state. The people then decided the fate of the party and since 18 years the BJP government is striving to develop Madhya Pradesh. Today, the state is progressing at a fast pace.,” Shri Shah added, congratulating Shri Shivraj Singh Chouhan for the progress in the state.