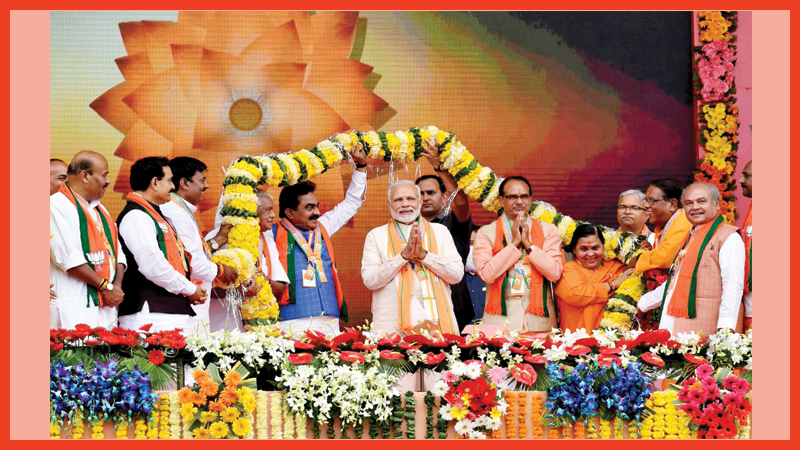 The PM also acknowledged the contributions made by leaders like Kushabhau Thackerayji and Rajmata Vijaya Raje Scindia Ji in strengthening the party’s organizational foundations in its current strong position in Madhya Pradesh. The Prime Minister also lauded the Madhya Pradesh government led by CM Shri Shivraj Singh Chouhan, saying that his government has continuously worked for the social empowerment of the people of Madhya Pradesh.

Describing his vision for the country, the PM again reiterated that the mantra of his government is “Sabka Saath, Sabka Vikas.” The Prime Minister also asserted his approach and commitment by saying, “We consider 125 crore people of India as one family and for us, the nation always comes first.”

Shri Modi also called upon the party workers to strengthen the party in Madhya Pradesh by spreading the message and vision of the BJP and its achievements to the people of Madhya Pradesh. He asked each party worker to ensure that the BJP wins at his respective booth and gave them the slogan of “Mera Booth, Sabse Mazboot” to strengthen the BJP state organization at the booth level.

He also criticized the Opposition parties, particularly the Indian National Congress for its failure to bring about economic and social development in the state of Madhya Pradesh despite ruling at the state and national levels for a long time. He called upon the people of Madhya Pradesh to decide between the politics of ‘Vikas (development)’ and politics of vote-bank in the upcoming state and national elections.

PM Shri Modi further elaborated by describing how the practice of ‘Triple Talaq’ had been banned in several Islamic countries of the world and its banning in India will go a long way in ensuring equal rights and dignity for Muslim women. He expressed shock and anger at the politics of appeasement and vote-bank played by the Congress on this issue and strongly asserted that all women, regardless of their religion, must have equal rights in a democratic country like India.

The PM touched upon the unfounded allegations leveled on him and his government in the concluding section and remarked, “People can throw as much dirt on us as they want to but they should not forget that the more dirt they throw upon us, the more this Kamal (Lotus, the BJP symbol) will bloom.”

–The BJP government in Madhya Pradesh, under Shivraj Ji’s leadership is leaving no stone unturned to serve the people of the state.

–For us, 125 crore Indians are our family, for us it is always nation first.

–Inspired by Pandit Deendayal Upadhyaya’s ideals, we are devoted to serve this land.

–We are fortunate – we identify ourselves with Gandhi Ji, Lohia Ji as well as Pandit Deendayal Upadhyaya Ji because we believe in communion.

–For 10 years, Congress betrayed the people. It is time to give them a befitting reply.

–People have Madhya Pradesh have to choose between politics of development and politics in the name of vote bank.
We are committed to empowering Muslim women. On one hand, we are initiating efforts to abolish ‘Triple Talaq’, but Congress is making it a vote-bank issue.

–The more dirt opposition throws, the more the lotus (BJP symbol) will bloom.