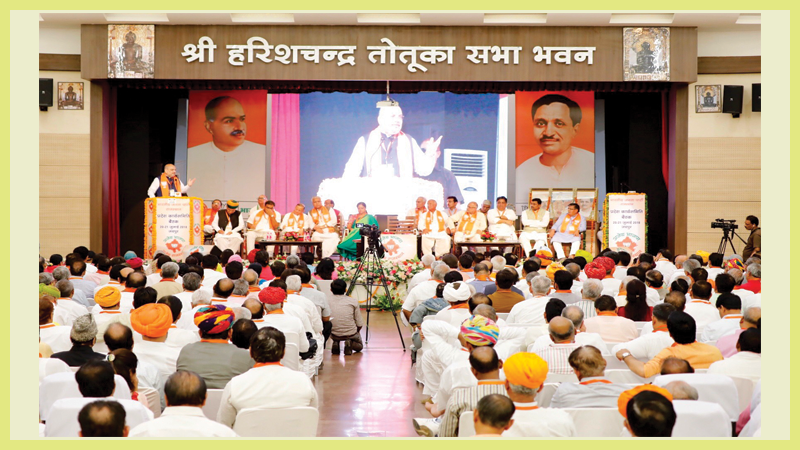 BJP National President Shri Amit Shah was in the poll-bound Rajasthan on a day-long visit on 21 July, 2018 during which he attended several organizational meetings. Shri Shah addressed the concluding session of the State BJP Working Committee Meeting in Jaipur and then followed it up with a meeting with all party Members of Parliament and Members of Legislative Assembly from the State.

This was Shri Shah’s first visit to the state after the appointment of party’s new State President Shri Madan Lal Saini. “The strategy to win the next Assembly and the 2019 Lok Sabha elections was discussed thoroughly in the meeting,” Shri Saini said after the completion of the Working Committee Meeting. He said the visit boosted the morale of the party workers and leaders.
Picking up from where Prime Minister Shri Narendra Modi left, BJP National President Shri Amit Shah asked cadres and leaders in Rajasthan to work for 18 hours a day to ensure that the party’s “vijay rath” keeps rolling on and to ensure the victory of the BJP in the upcoming elections.

Addressing the valedictory session of the party’s State Executive Committee Meeting in Jaipur, the BJP National President said BJP was working for the country’s development but the Congress, which had never done so, was busy leveling baseless allegations.

Later addressing the social media team, Shri Shah said that the party’s cyber warriors had always managed to defeat the Congress’ social media team and he expected them to repeat the feat during 2018 assembly elections and 2019 general elections. “There are only few months to go before elections. The Vijay Rath of BJP will roll on in all upcoming state elctions like Rajasthan, MP & Chhattisgarh and for that the BJP workers will have to work hard at the block and booth level,” he said, adding the social media team had a crucial role to play and different teams of creative workers should be formed at the block level.

He said that 32 lakh party workers in Rajasthan were connected with WhatsApp groups. He also cautioned the social media team on menace of fake news. He gave the example of party’s victory in Tripura and UP to stress the point about the importance of strengthening the organization ahead of the elections.

Shri Shah later took a meeting of the BJP MPs, MLAs and party office-bearers at Indralok auditorium where he reviewed the preparations for the upcoming state and Lok Sabha polls. “The party National President said that every worker of the party should dedicate 18 hours a day for the party for the next few months. The party’s workers are full of energy and fully charged,” former state BJP President Shri Ashok Parnami told reporters after the meeting.

State Housing and Urban Development Minister Shri Shrichand Kriplani said that National President wants the party to win more Assembly seats this time compared to last state elections. His visit has given strength to the party and party workers and we will achieve the target of winning more than 180 Assembly seats in the upcoming elections,” he said.
Education Minister Shri Vasudev Devnani said Shri Amit Shah has asked partymen to reach out to the masses on the basis of works done by the Centre and the state government.

He said the welfare schemes launched by the Raje government have been appreciated across the country and suggested that party workers should base the election campaign on them.