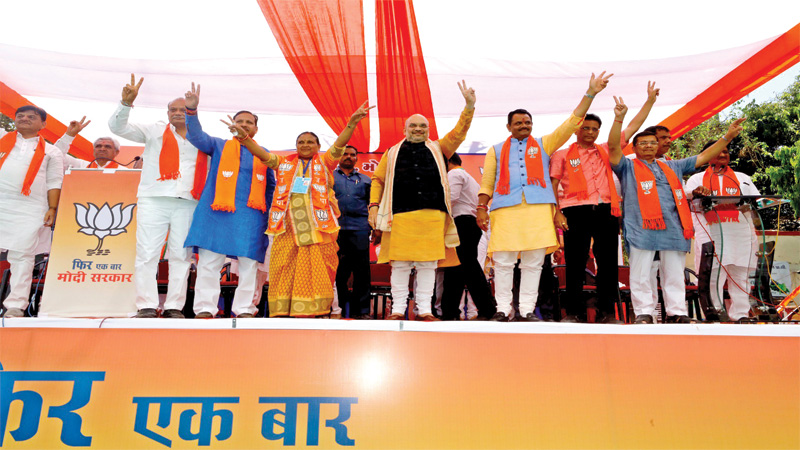 BJP National President Shri Amit Shah has said that the real issue in the current Lok Sabha elections is national-security, not the development.

Addressing two election rallies in Bodeli of Chhota Udepur district and Malanpada in Valsad district of Gujarat on April 19, 2019, Shri Amit Shah also hit out at Congress and its alleged anti-Gujarati attitude.

“This election is not a battle for development alone. Narendrabhai has already done a good deal of development but this is not the real issue. The issue is security of the nation and it can’t be assured by any other than Modi and the BJP. The pride of the country can also be increased by none other than PM Shri Modi who alone can speed up the economy, work for the welfare of poor and make India a super-power,” Shri Shah said.

He alleged that it was a tradition of Congress to do injustice with Gujarat. “Nehru did injustice with Sardar Patel and Indiraben with Morarjibhai. And Sonia Gandhi called Narendrabhai a merchant of deaths,” he said.

The BJP President said that the biggest thing that this government has done was ensuring the security of the country. “During 10 years of earlier UPA regime of Sonia-Manmohan at the Centre, any Tom Dick and Harry (terrorists) would come from Pakistan and triggers blasts but they were not given a befitting reply,” he said.
The BJP President said that after Pulwama attack the terrorist camp at Balakot in Pakistan were completely destroyed in aerial strike and there were celebrations all over the country and mourning in Pakistan and also in the Congress office. “When the whole country was happy there was mourning like scene in the Rahul Gandhi’s Congress office also. It seemed as if they have lost their own family men. Party leader Sam Pitroda said that there should not be such an action for the act of seven to eight people,” he said.

Shri Shah said, “Should there not be a tough action for martyring our 40 jawans. Rahul baba, If you have to do ILU-ILU with terrorists you do, but BJP government would give them befitting reply. No one can crack a joke about our border security.”
The BJP President also attacked Rahul for his silence on the statement of National Conference leader Omar Abdullah in which he had talked about a separate PM for Kashmir. He said that at the time of election Congress ally Abdullah was talking about two PM and Rahul was keeping mum for vote-bank. “Should anyone support such a party which puts on stake the unity and integrity of the country.

We have categorically said in our manifesto that when we get majority in both Lok Sabha and Rajya Sabha we will remove article 370 of the constitution. Even if BJP were not in power yet so long as even a single BJP worker was alive no one could separate Kashmir from India. It is and will remain the integral party of the country,” he said.

He also hit out at Congress party on the National Census Register issue and said that why Congress and other opposition parties were trying to protect the illegal intruders in our country. “They indulge in terrorists activities and blast bombs to kill innocent Indians but the opposition parties for appeasement politics even talk about their human rights,” he said.

He also talked at length about the pro tribal schemes of BJP governments saying that Modi as the then CM of Gujarat was first to allocate budget to the tribal in proportion of their population in 2005.

Shri Shah said that BJP was going to win the Valsad seat and whoever won on the seat makes the government at center.

He also appealed the people of Gujarat to make BJP victorious on all the 26 seats of the state. “Looking at the scenario during poll time, Narendrabhai’s return to power was sure. Valsad was the 246th Lok Sabha constituency where he has come to do campaigning and wherever he had gone he saw people shouting Modi-Modi which indicates that the people of the country have already decided to make Modi ji PM again,” he said.