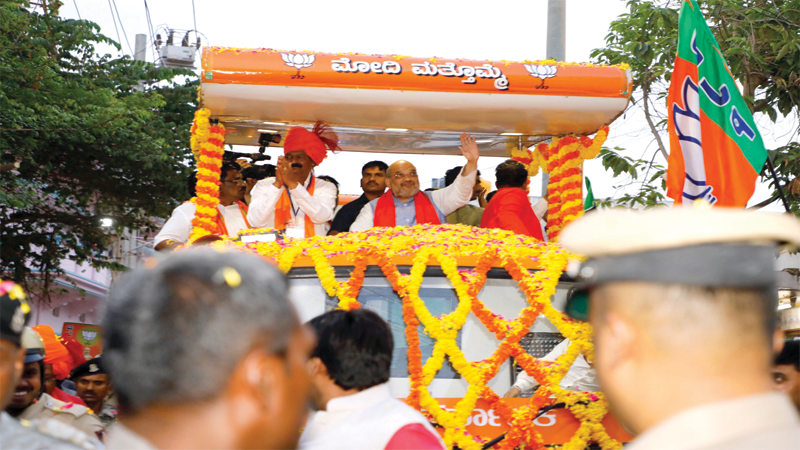 Braving hot and humid conditions, thousands of party cadres, including women, accompanied Shri Amit Shah’s convoy on foot, motorbikes and cycles as the procession wound its way through Banashankari area in the city’s southern suburb on 03 April, 2019 .

Addressing the crowds who gathered in hundreds en route, Shri Amit Shah said the party fielded young Surya to contest from the high-profile parliamentary seat in view of the demographic dividend the constituency has with lakhs of techies employed in IT firms like Infosys, Wipro, and TCS living in the area. BJP has given scope for the youth and they will be going to play a vital role for the making of New India
Waving party flags, sporting saffron placards and raising slogans in favour of Surya, Prime Minister Shri Narendra Modi and Shri Yeddyurappa, the BJP leaders urged the gathering to vote for the party’s lotus symbol on the ballot box.

Bangalore South will go to polls on April 18 with 13 others of the state’s 28 constituencies. Polling to the other 14 will be held on April 23.

Like the previous one BJP National President Shri Amit Shah held another massive road show in Bengaluru, Karnataka on 10 April, 2019 . Thousands of people had gathered all along the route showering flower petals on Shri Shah as the ‘rath’ wound its way in a delirious atmosphere.

Ahead of the “rath”, BJP Karyakartas sporting saffron turban and holding cutouts, placards and party flags danced to the drum beats, as slogans of ‘Modi Modi’ rent the air. 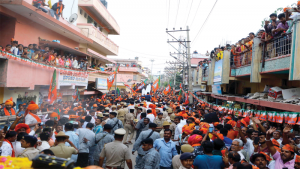