Prime Minister Shri Narendra Modi addressed Bharatiya Janata Party karyakartas at the party headquarters in New Delhi on 08 December, 2022 after the party’s landslide victory in the general assembly elections and by-poll elections. PM Shri Modi thanked the people and the BJP Karyakartas for their wholehearted support and said that the vote share is a clear indication of the days to come.

He said today, we can feel the fragrance of the hard work of BJP workers under the leadership of Shri JP Nadda. The PM also said that the public support the party received is a manifestation of ‘youthful thinking’ “I had told the people of Gujarat that this time Narendra’s record should be broken. I promised that Narendra will work hard so that Bhupendra can break Narendra’s record. Gujarat has broken all records by giving the biggest mandate to BJP in the history of Gujarat” the PM said.
Shri Modi iterated on the BJP gaining the confidence of the people because of its policies, He said, “People voted for the BJP because the BJP can take tough decisions in the interest of the country. The increasing public support of the BJP shows that the country is in anger against Parivarvad and corruption”. 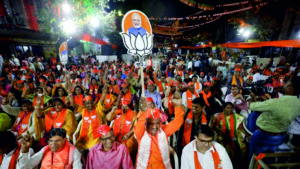 Talking about the BJP’s humongous victory in the state of Gujarat, PM Shri Modi said, “By giving the biggest mandate in the history of Gujarat to the BJP, the people of Gujarat have created a new history”. He further said that about 1 crore voters of

-By giving the biggest mandate in the history of Gujarat to the BJP, the people of Gujarat have created a new history

-Despite trailing behind by 1%, BJP will remain 100% committed to the development of Himachal Pradesh

Gujarat had not experienced the misrule during the Congress regime and gave their votes to the BJP only on the basis of the development they saw in the state.

Hitting out at the opposition, the PM called out the political parties that are promising false benefits for the sake of elections. The Prime Minister further added, “India’s future will become bright not by increasing Fault Lines, but by demolishing Fault Lines”. Shri Modi also called for increased unity in the nation and to further the spirit of “India First”.

Why women of the country trust BJP?


The Prime Minister finally addressed the people about why women of the country trust the BJP. Shri Modi said, “For the first time since independence, today there is such a government in the country, which is working by understanding the problems of women, their challenges, their needs and aspirations”.

“Today the tribal society is considering BJP as their voice, BJP is getting tremendous support from them. About 40 seats are reserved for SC/ST in Gujarat. Of them, BJP has won 34 seats. This change is being felt across the country,” said PM Shri Modi.

Youth votes only when they have faith in the government

Today, when the youth have voted in large numbers for the BJP, the message is clear that the youth have checked, tested and trusted our work, the PM added.

Despite trailing behind by 1%, will remain 100% committed

Talking about the Himachal Pradesh assembly elections, he said the BJP has trailed behind by a just 1% vote share, which is something that has been unheard of. The PM further said that BJP, despite trailing behind by 1%, will remain 100% committed to the development of the state.

Each of you is a champion

Prime Minister Shri Narendra Modi thanked party workers for ensuring victory in his home state of Gujarat. “To all hardworking BJP Karyakartas I want to say – each of you is a champion! This historic win would never be possible without the exceptional hard work of our Karyakartas, who are the real strength of our Party,” he said.

PM Shri Modi also thanked the people of Himachal Pradesh for the affection and support for the BJP. “We will keep working to fulfil the aspirations of the state and raise people’s issues in the times to come,” he added.