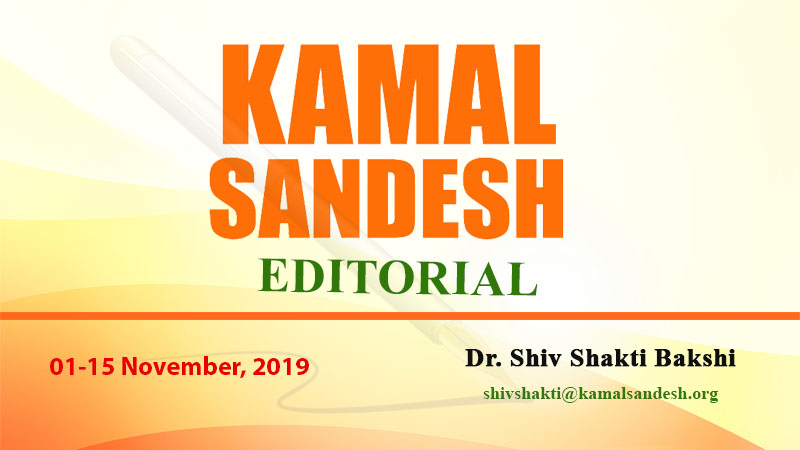 The people have once again given massive mandate to BJP governments in Maharashtra and Haryana. While in Maharashtra BJP-Shiv Sena alliance has got clear majority, in Haryana BJP emerged as the largest political party with around 3% increase in votes. It is new phenomenon in Indian politics that the incumbent governments are being voted back to power on the basis of their performance. It is a phenomenon in which pro-incumbency mandate in favour of the ruling dispensation is creating a new trust and hope in the politics. It is a phenomenon wherein hard work of the government is getting recognised and politics of development is getting the approval of the people. It is a phenomenon in which the aspirations of the people are answered through the relentless efforts of the government so that the people choose to repose their faith again and again on the incumbent government. It is a phenomenon in the Indian politics wherein the negativism that had crept in the people’s mind about the entire political system due to decade of Congress led UPA misrule, corruption, policy paralysis, scams and loot of public money has become a thing of past under the visionary and dynamic leadership of Prime Minister Shri Narendra Modi and under various state governments under BJP rule. It is a phenomenon which is ushering in a new era of performance based transparent and accountable governance, development oriented politics committed to people with an approach to serve and not to rule and a government eager to deliver in the spirit of moving forward with maximum possible ‘speed, scale and skill’. People are welcoming and supporting such a positive change in the polity.

In Maharashtra, the BJP government has provided a rare kind of stability in its polity in the leadership of the Chief Minister Shri Devendra Fadanavis. The Prime Minister Shri Narendra Modi has rightly observed that in the last fifty years, Shri Fadanavis is the first chief minister to complete his five year term in the state and voted back by the people. This stability has resulted in a visionary approach for the long persisting problems of the state, effective implementation of innovative schemes of the centre and the state, quick solutions for the immediate problems and long term plans for the state which has created a new faith and hope in the people about the future of the state. In the same way in Haryana, the five year rule of the Khattar government has created new avenues of opportunities while leading the state to newer heights and all round development. The people friendly approach of the Chief Minister Shri Manohar Lal Khattar has got the massive approval of the people with 3% increase in the votes. The BJP governments in both these states have given corruption-free, accountable, transparent and participatory governance to the people. The people in these states have given their emphatic stamp of approval to the massive development works and uncompromising efforts against corruption while making the governance accessible to the poorest of the poor in the society.

The politics of India is witnessing a new dynamism wherein people are actively participating to strengthen and consolidate the developmental works while aspiring for a better future. The credit of kindling the hunger for development goes to Prime Minister Shri Narendra Modi who has inspired the people, particularly the youth, women, poorest of the poor and weaker sections of the society to aspire higher and higher. While the union government under the charismatic leadership of the Prime Minister has created unprecedented examples to be emulated by the state, the state governments led by BJP are performing with astounding success on almost every parameter of development. These remarkable successes are getting reflected in the mandates of the people repeatedly who have voted massively in the general elections held in May, 2019 while re-electing Modi government with higher number of seats. In Maharashtra and Haryana, the people have again elected incumbent government led by BJP emphatically reposing their massive trust in the politics of development and performance. It is time to rededicate to the service of the people with the goal of meeting every aspiration of the people in the days to come.