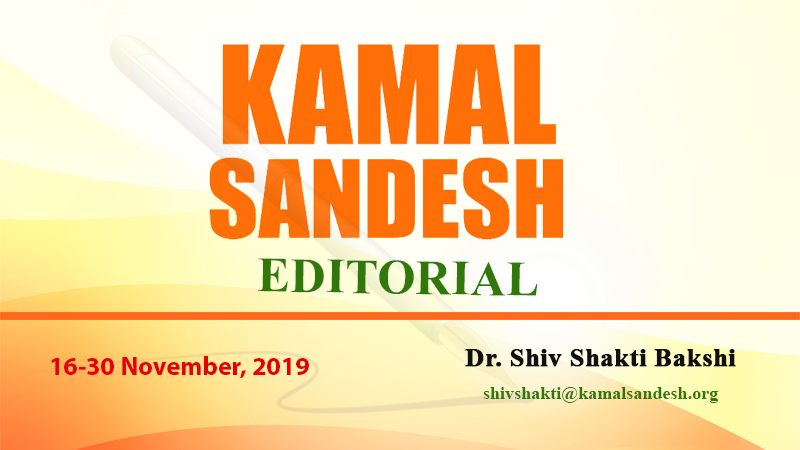 The nation has welcomed the Supreme Court verdict on Shri Ram Janmabhoomi with a sense of satisfaction and fulfilment. The nation has also shown a rare sense of responsibility and unanimity in respecting the verdict in its letter and spirit. A unanimous verdict of the Supreme Court has been received unanimously by the people cutting across different communities in the country. It is the strength of the Indian democracy, its constitution and judicial process that even an issue which appeared extremely difficult can be resolved within the framework of law, jurisprudence and justice.

The issue of Shri Ram Janmabhoomi which can be traced back to early 16th century and lingered in different courts for decades has finally reached its denouement with a verdict which has been recorded in the history with golden letters. The Hon’ble judges of the Constitutional Bench have created an example to be emulated by others by showing that even the most complex challenges can be met with zeal, commitment and resolve and a solution can be found even in most extreme circumstances. The unanimous verdict of the Constitution Bench has further elevated the reputation of judiciary, established the efficacy of judicial process, shown to the world the power of the Indian constitution and further strengthened the democracy in India.

The nation has witnessed a long and excruciating journey in getting the Ayodhya verdict in favour of the construction of a grand temple of Shri Ram at his birthplace. A comprehensive debate on Shri Ram Janmanbhoomi has taken place in the country wherein its imprint can be felt on the social, judicial, historical, religious traditional and processes and matters relating to beliefs in the society. The debate has further strengthened our constitution, judiciary, judicial process, political environment and democratic values. The verdict should not be seen as the victory or defeat of any community, rather it is the outcome of the multi-linear comprehensive debate and dialogue helping to address the issues in more mature manner.

In the same spirit the entire country has welcomed the outcome with open heartedness and accepted the verdict with open mind while maintaining harmonious environment in the country. India for centuries is known for mutual harmony, co-existence, tolerance and peace. The Indian society known for its remarkable plurality has completed a long journey believing and practising these values. Despite having differences of opinion on several issues, the people have been moving together accepting the outcome with open mind. The people are committed to pursue the age long traditions of a harmonious environment in the society in the days to come.

The Prime Minister Shri Narendra Modi has rightly appealed to the people saying that the verdict is neither a win nor a loss for anyone. He has further said that the time has come to strengthen the rashtrabahakti, the devotion for the nation. BJP National President Shri Amit Shah has also said that this decision will further strengthen India’s unity, integrity and great culture. BJP Working President Shri JP Nadda has echoed the same sentiments and said India will continue to grow stronger on the principles of unity along with its cultural heritage.

BJP has welcomed the verdict with great satisfaction as it has remained committed to the construction of Shri Ram temple in Ayodhya while making all sincere and positive efforts all through these years. As the path for building a grand temple of Lord Shri Ram has been cleared by the Supreme Court, a longstanding issue has come to an end and gates for building a New India open before the people. The grand temple of Shri Ram will definitely represent the grand cultural heritage of India since ancient past, and as a grand temple should also represent a great nation, each and every citizen has the duty to rededicate oneself in the service of Maa Bharati to reclaim the greatness and glory for the great nation.