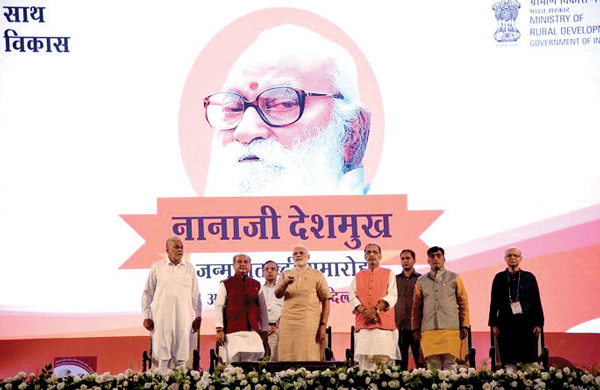 The Prime Minister, Shri Narendra Modi, on October 11, 2017 attended the inauguration of the birth centenary celebration of Nanaji Deshmukh at Pusa in New Delhi.

The Prime Minister visited an exhibition on the theme “technology and rural life.” The exhibition showcases good practices and applications, as well as schemes and initiatives of the Ministry of Rural Development. He interacted with some innovators and beneficiaries.

Shri Modi launched the DISHA Portal – a smart governance tool developed for MPs and MLAs for monitoring of implementation of various Programmes and Schemes of different Ministries in their constituency through a single portal. As on date, integration of datasets of 41 programmes and schemes of 20 Ministries has been achieved on this Portal.

He also launched Gram Samvaad – a citizen centric mobile app to serve and empower the rural citizens of India, by facilitating single window access for citizens to information at Gram Panchayat level, on various Rural Development programs. The App presently covers seven programs of the Ministry of Rural Development.

On the occasion he addressed an audience of over 10,000 people, drawn from Self Help Groups, Panchayats, water conservation innovators, and beneficiaries of Pradhan Mantri Awas Yojana.

He said that today marks the birth anniversary of two great leaders – Nanaji Deshmukh and Loknayak Jayaprakash Narayan, who devoted their life to the betterment of the nation.

He said that facilities that are associated with cities must also be made available to our villages. He said that the real essence of a democracy is Jan Bhagidari and integrating people in the development journey of cities, and villages. Regular interaction with governments is required, he added.

Noting that lack of sanitation facilities is adversely impacting the development journey of villages, the Prime Minister said that is why the Government have been working to build toilets in rural areas.